There was a time in Vancouver when the neon lights were bright on Broadway (and Granville, and Hastings … ) but it wasn't magic that was in the air; rather, it was a heated debate: Were all those neon signs creating a tawdry cacophony of light or a big-city feel?

The first neon signs appeared in Vancouver in the late 1920s and were such a novelty that they drew families out at night on viewing expeditions. At its peak in the 1950s, there were as many as 19,000 (according to one estimate) neon signs in town. Motels, restaurants, car dealerships, even funeral parlours advertised their services in colourful neon that became associated with the city.

"If you were visiting your relatives, part of coming to Vancouver was, 'Let's go downtown and see the lights,' " says Joan Seidl with the Museum of Vancouver, whose current show, Neon Vancouver/Ugly Vancouver, illuminates the city's love-hate relationship with the signage.

But in 1958, the Community Arts Council launched a campaign urging a city hall crackdown. The CAC and its supporters argued the neon was a tacky distraction from the beauty of Vancouver's natural landscape, and was in danger of altering the city's reputation.

"That's really at the heart of the anti-neon crusade," says Ms. Seidl, the exhibition's curator. "What kind of city do we want to be? How do we want to appear to the world? What are we saying about ourselves if we insist on saying it in this incredibly loud and glittery format? Where's our dignity?"

The neon companies fought back, but the opposition gathered steam through the 1960s.

"What's the sense of putting up a fine building only to plaster it with some neon nonsense plugging instant cupcakes?" wrote Tom Ardies in a newspaper column headlined Let's Wake Up From Our Neon Nightmare.

In 1974, city council passed a new sign bylaw. Neon wasn't outlawed, but signs were subject to tough restrictions. Existing signs were grandfathered, but once they came down (even for a minor repair), they became subject to the new regulations.

The bylaw had a "huge impact," Ms. Seidl says. "Some of that, I think, were the restrictions on the signs. If we can't do the fun stuff, if we can't make the arrows chase each other, why do it in neon?"

The city's look was forever altered. A few signs survived (some remain, most notably at Save-On-Meats, and the BowMac sign is still behind the Toys "R" Us marquee on West Broadway), but many neon treasures wound up in the junkyard. Some were salvaged, though, and can be seen in their full neon glory at the MOV until August. (Next door, the H.R. MacMillan Space Centre devotes part of its permanent exhibition to concerns about light pollution and its impact on our ability to stargaze.)

As another sign debate lights up the city, Ms. Seidl points out a difference: The fight back then was spearheaded by citizens concerned about aesthetics, not people looking for a good night's sleep.

"You didn't hear arguments from residents. Yes, there were people living in all those commercial hotels on that Granville Street strip back when neon was king," she says. "But apparently they could live happily with the stuff flashing on and off. It was part of the urban experience." 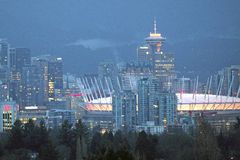