Step by step, the renowned Haida Nation, nearly wiped out by the white man's smallpox, is reclaiming control of its vast, lush, mystical homeland.

"We're running out of things to fight about," said long-time Haida leader Guujaaw, as a new decision-making authority was struck this week to give the Haida an unprecedented say in harvesting the large forests that still cover much of the former Queen Charlotte Islands off the coast of British Columbia.

For the first time, the islands' ample timber quotas will not be set by the province's chief forester, but by the Haida Gwaii Management Council. The council will also have responsibility for other land-use decisions, and conserving the islands' many heritage sites.

"This is a very significant step for B.C. and the Haida," said Derek Thompson, who will chair the council of five, which also includes two Haida and two government representatives. "Outside of a treaty context, I'm not aware of anything like these delegated responsibilities anywhere in Canada."

The move follows legislation last year to rename the islands Haida Gwaii and establish a protocol for shared decision-making. Earlier agreements protected large tracts of land from logging, while Gwaii Haanas National Park, covering South Moresby and Graham Islands, was set aside in 1987.

"All the areas we fought to protect for 30 years are now protected," said Guujaaw, who goes by a single Haida name. That amounts to about half of Haida Gwaii's estimated land base of one million hectares, he said.

The region's main tree-farm licence, controlled for decades by a succession of large forest companies, is now in Haida hands. A more different approach to logging is difficult to imagine. Whereas industrial loggers gravitated to Haida Gwaii's particularly tall stands of valuable cedar like bees to honey, those are precisely the areas the Haida will leave alone.

"Our primary concern is to protect them. We've mapped them right out [of areas to log]" said Guujaaw. "The cedar is basic to our culture. There certainly won't be any high-grading the way the logging companies used to do." Protecting streams and wildlife are also paramount, he added.

It's been a remarkable path back for the Haida, whose smallpox-riddled population had dwindled to just a few hundred by 1900.

The Haida's growing control of their homeland has been achieved outside the province's slow-moving treaty process. There's not much point in signing a treaty, Guujaaw said, when the Haida have nothing to surrender.

Aboriginal Relationship Minister Mary Polak, who lived for a time on Haida Gwaii, said the evolving relationship with the Haida does not mean the government is ceding its governing role.

"This is about finding a way to share the land and living together," she said. "It's not a treaty, but it's finding a practical way to ensure that joint decision-making really works. It's focused on use of the land."

Ms. Polak said the Haida are in a unique situation. There are no overlapping territorial issues with other native groups, and the Haida's claim to the land is strong, she said. "The Haida are to be applauded."

Judith Sayers, a visiting law professor at the University of Victoria and former chief councillor of the Hupacasath First Nation, hailed the latest Haida breakthrough as "an amazing model. I'm always so impressed by the Haida and what they have been able to achieve. I think this is going to revolutionize [their territory] For forestry, land management issues, heritage, now we have the blueprint. I think it's excellent."

The new management council will have no say over existing municipalities, native reserves and federal Crown land.

Mr. Thompson, a deputy environment minister for 30 years, said he expects decisions to be made by consensus, but if there is a split, he has the authority to cast a deciding vote.

Guujaaw said non-natives have nothing to fear as Haida Gwaii comes increasingly under aboriginal sway.

"We've been fighting governments all these years. Now we are working alongside them, and we are going to do what we can to make it work," he said. "The local people here accept that. They've worked beside us. Our kids go to school together. This is all about better management of the land." 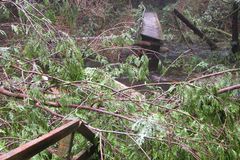