What do you get when you stir Chinese soy sauce, Japanese wasabi, Spanish chicken and beef, African pumpkin, Andean corn and Incan potatoes in a melting pot bursting with citrusy chili peppers and black-mint pesto?

This multicultural mashup is called Peruvian cuisine. And according to many connoisseurs – including the food editors at Forbes, the National Restaurant Association and Spanish celebrity chef Ferran Adria – it's been touted, for a couple of years, as the next big international food trend.

Here in Vancouver, with our diminutive South American population, the trend has been slow to catch on. We have Mochikas Peruvian Café, concealed inside Kitsilano's Platinum Touch Auto Spa, and the humble Silvestre Deli and Bistro in Gastown.

But now there's Chicha, the city's first modern Peruvian-inspired restaurant with a liquor licence. Opened in May, it seems destined to bust these delightful new flavour sensations into the mainstream.

What do they taste like? Imagine a pale-green mound of smoothly whipped potatoes, blended with cilantro-infused vegetable oil and parsley, served chilled and bedecked with soy-and-sesame-cured albacore tuna on a bed of passion-fruit ponzu spiked with spicy wasabi cream. One of several causa dishes, this tuna version is fresh, beautifully balanced, packed with lots of wow factor and unlike any thing I've ever tasted in Vancouver.

The same goes for corazon anticucho, skewers of Pemberton Meadows beef heart, cut into small morsels and marinated in herbed vinegar for three days (so it doesn't taste overly gamey) and lightly grilled. The charbroiled offal is served with three traditional sauces that cover a broad spectrum of Peruvian flavours: zesty aji amarillo that's been mixed with honey to draw out the pepper's distinct citrus flavour; a slightly spicier red rocoto chili mayo; and a green pesto made with fresh cheese, evaporated milk and dark, earthy huacatay, also known as Peruvian black mint.

Executive chef Shelome Bouvette, who owns Chicha with sous-chef Allison Flook and general manager Kumiko Umeno, stresses that her food is Peruvian-inspired, not classic, mainly because so many traditional ingredients aren't available here. Consider that there are more than 3,000 types of potatoes in Peru.

Still, Ms. Bouvette does a darn good job of melding her own sassy style of cooking with Peru's colourful flair. Her palitos de yuca (cassava fries) are properly starchy and crisp, served with a cheesy mustard-yellow sauce made from amarillo peppers and Parmesan cheese.

Cebiche comes in several styles. For a more traditional take, try the classico white fish cured in freshly squeezed lime, aji chili, jalapeno and seafood stock. It's served with crunchy choclo kernels (a large, nutty Andean corn) and yam (a traditional accompaniment, which adds sweetness to the dish, given that Peruvians don't eat a lot of fruit).

I'd say some of her modifications are actually an improvement on the original. Take empanadas, for instance. Chicha's baked dough, made with butter and shortening, comes out of the oven flaky and golden, almost like a thicker version of laminated croissant dough.

Although this was my first time trying picarones, the sweet-potato pumpkin doughnuts were light and lovely.

Chicha's is a small casual space, on Broadway off Main Street, with a front wall of windows and white-tiled walls. There's a long wooden bar down one side, opposite a single, tightly squeezed row of aquamarine-tiled tables.

On a hot summer evening, it gets awfully sweaty inside. All the better to swill down an icy pisco mojito or chicha morada, a house-made blue-corn non-alcoholic drink steeped with pineapple, quince, cinnamon and cloves.

The pisco sour was the only flavour to hit my lips that I didn't like. It tasted more sweet than tart. Perhaps I'm just not well enough acquainted with Peruvian cocktails. Sounds like the perfect excuse to go back.

Bring on fresh flavours with a Peruvian feast
May 3, 2013 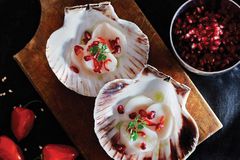