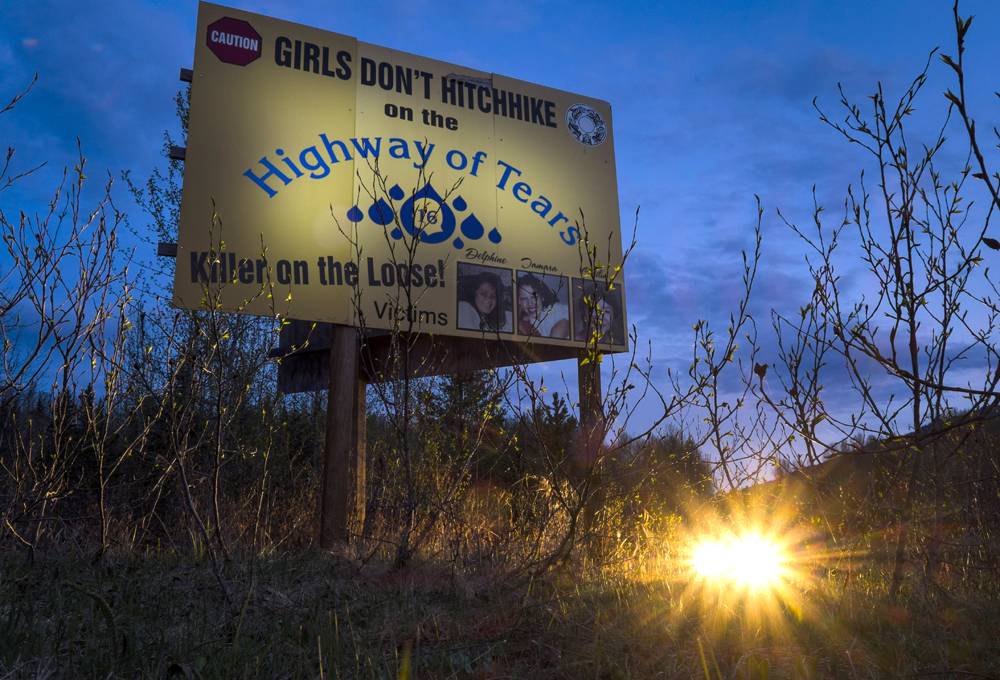 A billboard along Highway 16 near Smithers, B.C., stands as a warning and memorial to those who have been killed or gone missing. (John Lehmann/The Globe and Mail)

It’s been nearly 25 years since the Jack family disappeared.

Ronald Jack, a married father of two, called his mother in the early-morning hours of Aug. 2, 1989, to say his family would be hitting the road for a couple of weeks. Mr. Jack said he had been offered a job at a logging camp or ranch and his family – including his sons aged 9 and 4 – would be joining him.

The call was made from a phone about 50 kilometres west of Prince George, on a section of road known as the Highway of Tears. What happened to the family remains a mystery, but local First Nations groups suspect foul play and say the story demonstrates how Highway 16, a road offering a route away from the poverty of the region, can leave people vulnerable to predation.

Like most of the young aboriginal women who have disappeared or been murdered along the notorious stretch, the Jacks were on the road because they were poor and the highway led to the promise of a new job. Others have found themselves hitchhiking because they couldn’t afford any other way to travel the vast, remote region.

“Poverty breeds a form of vulnerability,” said Wally Oppal, who chaired B.C.’s public inquiry on missing women and travelled the Highway of Tears corridor as part of his work. “There’s no empirical evidence that says that one thing leads to another, but I think our common sense tells us that people there living in that area have been subjected to an inordinate amount of violence. There’s one common factor. It comes back to poverty and vulnerability.” 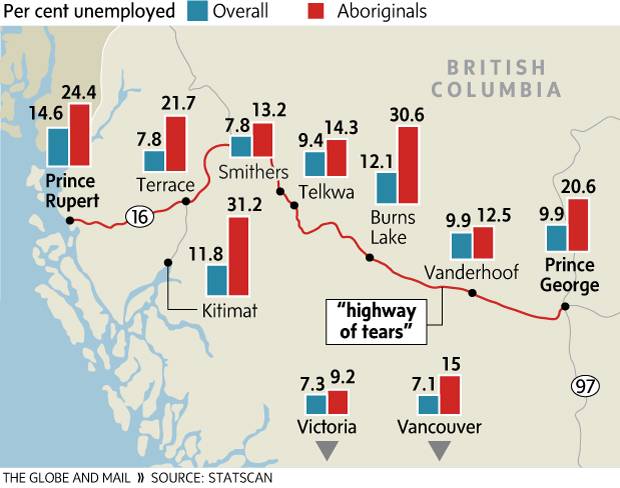 The 2011 National Household Survey found the unemployment rate in Prince Rupert was 14.6 per cent overall. For aboriginals, however, it was 24.4 per cent. (The overall national rate is 7.8 per cent.)

Mr. Oppal described some of the conditions he witnessed as shocking and unacceptable, with substandard housing and poor infrastructure.

“I think you’ll find, in any case involving a predator or a serial killer, the victims of the people preyed upon are vulnerable people,” he said in an interview.

There’s one common factor. It comes back to poverty and vulnerability.
Wally Oppal

In 2006, First Nations groups held a Highway of Tears symposium aimed at improving safety along the 700-kilometre stretch from Prince Rupert to Prince George. The symposium’s long-term recommendation was to address what was forcing people to the highway in the first place – First Nation intergenerational poverty.

The symposium report described poverty as the “first and most significant contributing factor” for many of the aboriginal women on the highway. It said residents viewed vehicles as a “luxury items” and were putting themselves at risk by hitchhiking because they simply had no other transportation options. 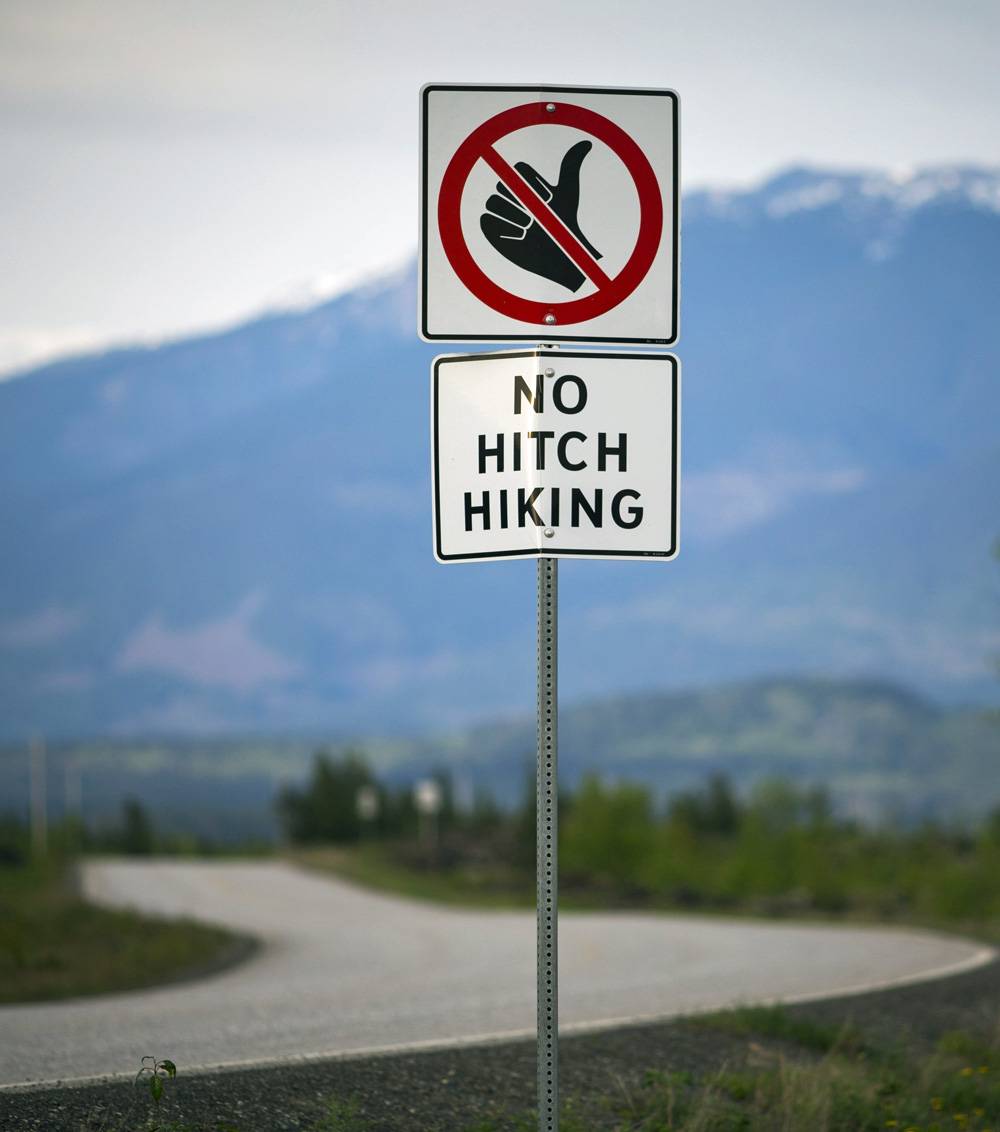 Each spring, the families of young women who were killed or disappeared along the Highway of Tears would head to Prince George for a police update.

But there was no group meeting this year, and that’s led some to wonder about the status of the RCMP investigation.

Jump to the rest of this story...

Among the recommendations was a shuttle bus service between each town and community along the highway, something Mr. Oppal endorsed.

The provincial government appeared to agree, but recent access to information documents indicate little work has been done, and advocates say the lack of a shuttle bus is only part of the problem – that the predator of poverty must still be addressed.

Some of those issues are expected to rise to the fore next week, as a high-profile trial gets underway in Prince George. Cody Legebokoff is charged with killing four females in the area between 2009 and 2010.

Jacqueline Holler, co-ordinator of the Women’s and Gender Studies Program at the University of Northern British Columbia in Prince George, said hitchhiking is a reflection of economic issues in the Highway of Tears region. Ms. Holler, who is working with the RCMP to study hitchhiking in northern B.C., said northern poverty is an issue aboriginal people have long been clamouring for action on without being heard.

“We need to have a concerted study of social inequality in the north precisely because, on one hand, we have this enormous resource wealth in the north and we have a lot of people who make a lot of money up here,” she said in an interview. “On the other hand, we have people who are living in incredibly difficult situations. There are some features of climate and geography and infrastructure that make northern poverty particularly grinding and isolating.”

Laurie Sterritt, chief executive officer of the Aboriginal Mentoring and Training Association, a group dedicated to helping First Nations people find careers in the resource sectors, said her organization has helped more than 800 people from 150 bands find jobs in just over four years. Ms. Sterritt said it’s essential for First Nations workers to play a role in the province’s hopes for the liquefied natural gas sector.

“As the resource boom continues, more and more the aboriginal communities are seen as a solution to the workforce problem. If we make a concerted effort, the representation rate will go up in all of those natural resource sectors,” she said in an interview.

The federal government this week announced it would create an office to co-ordinate activities on energy infrastructure development with B.C. First Nations and industry.

But for now, Sally Gibson said poverty in the region is as bad as she’s ever seen it. Ms. Gibson’s niece Lana Derrick was last seen at a gas station near Terrace in October, 1995, and the case remains unsolved.

Locals are used to hearing about the impending job boom and how they’ll be part of it. But the boom, she said, never seems to come.

“It’s kind of pointless,” she said, “and people are kind of just giving up.” 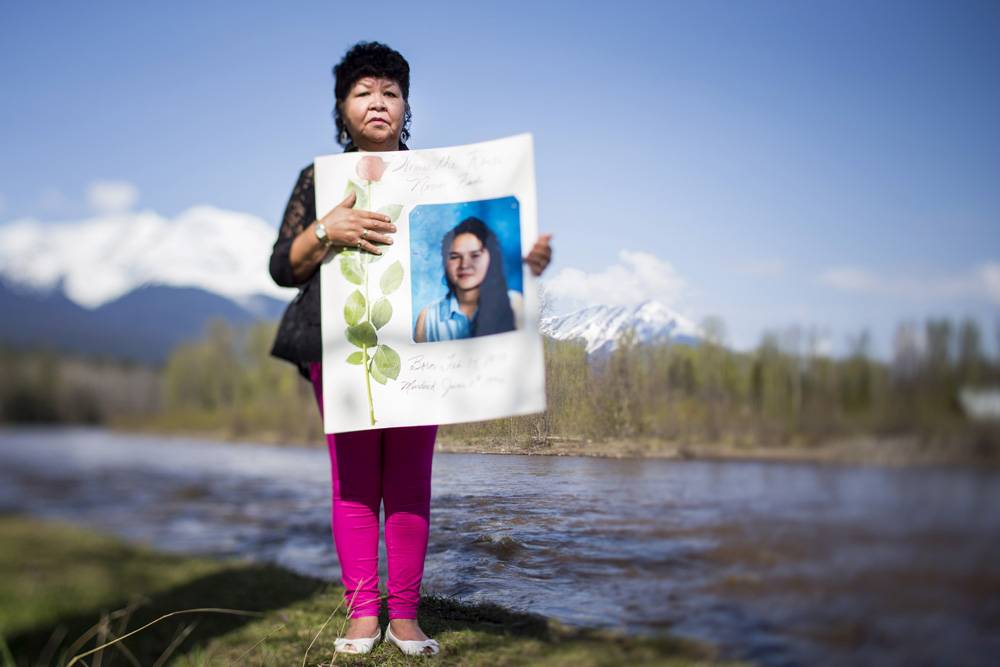 Matilda Wilson poses near her home in Smithers, B.C., on May 10, 2014, with a memorial poster for her daughter Ramona, who was found dead along Highway 16. (John Lehmann/The Globe and Mail

Each spring, the families of young women who were killed or disappeared along the Highway of Tears would head to Prince George for a police update. But there was no group meeting this year, and that’s led some to wonder about the status of the RCMP investigation.

Sally Gibson, whose niece Lana Derrick was 19 when she was last seen at a gas station near Terrace in October, 1995, said she hasn’t been contacted by the RCMP this time around. “I haven’t heard from them at all,” she said in an interview.

The RCMP, despite repeated requests over a number of weeks, would not make anyone available for an interview on the Highway of Tears investigation. Corporal Darren Lagan, an RCMP spokesman, wrote in an e-mail that the force chose to conduct home visits with individual families this year instead of holding a group meeting.

“The families had indicated to us that they find these direct meetings more effective than a group setting,” he wrote. “Should the families bring a request forward to conduct a group meeting again, we would certainly consider that.”

Ms. Gibson, however, said she hadn’t been contacted, in person or by phone.

Matilda Wilson, whose 16-year-old daughter Ramona disappeared in 1994 and was found slain near Smithers airport the following year, said she wasn’t given any explanation for why the group meeting was cancelled. She said she did hear from police, though there was no new information on her daughter’s case.

Wendy Kellas, Highway of Tears initiative manager at Carrier Sekani Family Services, which keeps in close contact with the families, said not having the group meeting sends the message the investigation may have stalled. 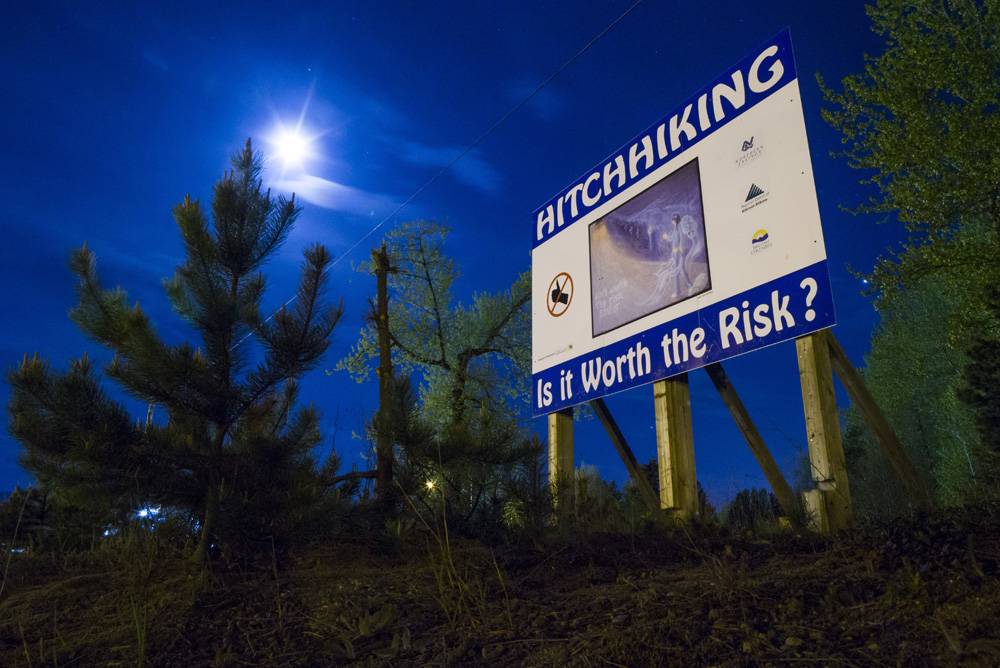 Highway 16 near Terrace, B.C., is also known as the Highway of Tears. (John Lehmann/The Globe and Mail)

The Highway of Tears investigation, known as Project E-PANA, was started in fall, 2005. It consists of 13 homicide cases and five missing people’s cases. Project E-PANA only looks at cases involving females who disappeared between 1969 and 2006, were involved in hitchhiking or high-risk behaviour, and were last seen within a mile or so of Highway 16, 97 or 5.

B.C.’s missing women inquiry heard that the number of victims of the Highway of Tears could be more than 40, if the criteria was broadened.

The RCMP has said it is confident a single serial killer is not responsible. It previously said 50 investigators were working on the file, though it would not confirm how many remain.

The RCMP’s last major Highway of Tears update came in September, 2012, when it announced Bobby Jack Fowler was responsible for the 1974 death of Colleen MacMillen. Mr. Fowler died in an Oregon prison in 2006 while serving time for an unrelated crime, and was linked to Ms. MacMillen’s death by DNA.

Earlier this month, the federal RCMP released a report on missing and murdered aboriginal women across Canada. It said it recorded 1,017 homicide victims and 164 missing people’s cases between 1980 and 2012. Solve rates for aboriginal female homicides in B.C., at 82 per cent, were lower than several other provinces, including Quebec, Ontario, Manitoba, Saskatchewan and Alberta.