In the fall of 1998, Adrian Dix wrote a memo for his own files about a discussion he had earlier that year with his boss at the time, then-premier Glen Clark.

Mr. Clark had told him that his neighbour was applying for a casino licence and he wanted Mr. Dix, who was his principal secretary and top political aide at that time, to ensure that Mr. Clark was not part of the casino approval process.

After writing the memo, Mr. Dix took the date stamp for the Office of the Premier from his secretary's desk, turned the date back to July 17, 1998, and stamped the memo with that date. Mr. Dix would later say the date coincided with the date on notes he made shortly after his conversation with Mr. Clark.

In recent weeks, his decision to change the date has been in the spotlight. The incident has been at the centre of an aggressive attack-ad campaign that ran in the days leading up to the call of by-elections for April 19 in Port Moody-Coquitlam and Chilliwack-Hope.

"If that is what Adrian Dix did when he worked for the premier, imagine what he will do if he is the premier," the radio ads stated. "He can forge a memo but not the truth about his record."

Does it work to dip into the misty past in order to rip apart a political opponent? Campaign advisers and political scientists say its effectiveness depends on how the ad is done. An attack ad can be devastating, regardless of how far back it goes, if done right, they say.

"In general, people may pooh-pooh negative ads and say they are not nice, but they use them because they work," he said.

However, the ads have to "ring right," Prof. Mauser added. Going back years to dig up dirt will work only if it strikes the viewer that the ad exposes something that would be true now. Bringing up old business will not be believable if the politician attacked in the ad sounds like a completely different person, he said.

The effectiveness of the ad will depend on whether Mr. Dix seemed like a person who would now backdate a memo, Prof. Mauser said, or if viewers think the whole episode seems trivial.

Marcella Munro, a former communications strategist in federal and provincial NDP election campaigns, said the track record of negative advertising is mixed. She has not seen a huge shift in allegiances as a result of attack ads.

To be effective, Ms. Munro said, an attack ad must be easily understandable and speak to issues that are top concerns for voters. It could be based on a historical event, but is it still relevant?

The danger in reaching back so many years is that the audience may greet the ad with a big yawn, said Lindsay Meredith, a marketing professor at SFU's Beedie School of Business. Alternatively, voters may come away hating both sides.

However, media relations consultant Michael Geoghegan said an effective attack ad against Mr. Dix could hurt the B.C. Liberals more than the NDP.

Voters considering the NDP as an alternative to the Liberals may switch to the B.C. Conservatives after seeing the ad. "In the end, it may not hurt [Mr.] Dix at all. It may manage to split the [anti-NDP]vote," Mr. Geoghegan said.

Mr. Dix responded to criticism of what he did years ago, admitting he made a mistake. 'It was wrong to have done it. It was sloppy. I should have clearly put the date that I had typed the memo," he said in 2002. "I didn't think at the time that these events would take on the importance that they took on later," Mr. Dix said.

Negative advertising that has been directed against Bob Rae, Interim Leader of the federal Liberals, will likely be more effective than the attack ad targeting Adrian Dix, political consultants say.

The Ontario-based ad, financed by the federal Conservatives, blames Mr. Rae for job losses, high income taxes and record deficits while he was Ontario premier from 1990 to 1995. "He has a proven record of failure," the ad states. "If he couldn't run a province, why does he think he could run Canada?"

Mr. Dix, B.C. NDP Leader, has been attacked in a radio ad financed by the Independent Contractors and Businesses Association of B.C. for changing the date of a memo that was relevant in a political corruption scandal 14 years ago.

The Ontario ad may resonate with those who were in the province at that time, as well as a younger generation, Ms Munro said.

Mr. Rae was branded negatively in the 1990s and that still sticks with those who were there, she said. Meanwhile, others who do not know much about the economy at that time may believe what they hear without putting information about job losses and the deficit in context.

Mr. Geoghegan said it isn't clear who will benefit from the Rae ad.

"The ad will muddy the waters," he said. It may remind viewers of Mr. Rae's history in the NDP and suggest the distance between the two parties is not so great, smoothing the way for a merger that could challenge the Conservative Party. Alternatively, if the ad succeeds in creating distrust of Liberals, it may drive people to vote for the NDP, he said. 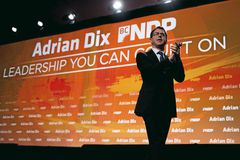 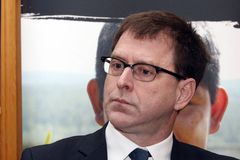 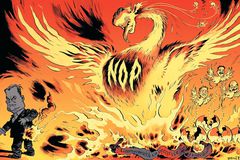