Say what you like about the twin star forwards, the franchise goalie and the richly talented roster. But there's another reason the Canucks are playing for hockey's biggest prize - the American Midwesterner who brought them to Vancouver in the first place.

It was freewheeling ice impresario Tom Scallen who delivered the National Hockey League to British Columbia's Lower Mainland more than four decades ago. Owner of the Ice Follies and, later, the Ice Capades and Harlem Globetrotters touring shows, the Minnesota native nabbed the Canucks after potential local owners balked at the price.

The squad that, in these playoffs, is Canada's team was started by a man who didn't last long in Vancouver. A stock offering landed him in Canadian prison and, later, saw him deported. He sold the team.

Now 85, he lives and still practises law in his hometown of Minneapolis. He doesn't mince words on the ordeal, including on friends (Pat Quinn, his favourite Canuck, though he "wasn't much of a skater"), a now-deceased ownership rival who he says orchestrated the legal troubles ("I'm glad he's dead"), and on the key question at the time - could Vancouver's hockey market justify the lofty expansion fee?

"Listen: Hockey's king in Canada," he says, sitting in his book-filled study. "I knew they were all hockey nuts, so I knew that, having a team in the National Hockey League, we couldn't miss. And I was absolutely right."

A Second World War veteran who trained as a lawyer upon his return home, Mr. Scallen slowly amassed his portfolio. He continues to live a life of grandeur befitting the well-connected businessman he became - one who, seemingly on a whim, bought a hockey team to turn a profit.

He and his wife keep a sprawling home on a double lot along a tony stretch of what he notes is the city's prime neighbourhood. Limited by a recent knee replacement, he conducts much of his business these days from his second-floor study. "My noodle's as good as it ever was," he says, smiling. "I wish I could say the same for my legs."

In the room, he's surrounded by classic toys on display, an agenda with appointments meticulously recorded and a television. "You know I've got a high-definition set?" he asks. He also points out an antique armoire - "It's 17th-century French." Mr. Scallen is prone to such occasional boasts, which come as he fondly recalls the story of the Canucks' inception.

The NHL expansion in 1967 didn't include Vancouver, but the city remained an obvious candidate for a team. Local hopefuls emerged, only to be scared off by the $6-million expansion fee.

"Vancouver back in the sixties was a pretty small town in many ways," Arthur Griffiths, whose family was the team's second owner, says. "It was forest industry and mining. It wasn't high tech. It was old money, and most of the old money was pretty tight."

The president of the Minnesota North Stars, Walter Bush, had an idea, and called his friend, Mr. Scallen.

"They said, 'Tom, we're in a bad political situation,' " he remembers. They asked if he'd buy the rights, which would come with the name of an existing minor league team - the Canucks. They discussed the arena capacity and player salaries for no more than 30 minutes.

"We won't have any trouble making money up there, so I'll do it," he told them.

The 1969 sale to his Minneapolis-based Medical Investment Corp. Ltd. (Medicor) group surprised many. Mr. Scallen borrowed half the money, and his hockey experience was limited to his time as a high-school and college goalie. Long-time NHL coach Punch Imlach later wrote that Medicor "didn't know a hockey puck from a road apple."

The games sold out but the team struggled on the ice, and Mr. Quinn - a player who later became a team executive - says Vancouver fans were, at first, drawn by the other teams they'd grown up watching. "They were coming to watch the Big Six teams. They didn't care too much about their local boys right off the bat. It took a long, long time."

Mr. Scallen regrets only two personnel moves - using the franchise's first draft pick on Dale Tallon, who became an all-star, but was a "big disappointment," he says; and not firing his first coach sooner.

"They were terrific to me," says Mr. Tallon, now the Florida Panthers general manager, who enjoyed his three years in Vancouver. However, the owners soon took a more hands-on approach, he says. "They started meddling in the second year."

The team purchase, meanwhile, was a financial stretch. Mr. Scallen's empire was already teetering under the weight of high-interest debt. In late 1970, its first season, the team issued a stock offering that brought in roughly $3-million.

That money was moved up the line to Medicor, which held 60 per cent of the Canucks. Mr. Scallen was president of both companies and the money was repaid. He says the transfer was perfectly legitimate; the Crown alleged it was an illegal move to repay Medicor debt.

He was charged with theft and issuing a false prospectus. A jury found him guilty in the spring of 1973. He appealed (Vancouver entrepreneur Jim Pattison guaranteed his bail) but lost, and spent a month in a prison hospital with a broken leg before being sent to minimum security. He was ordered to do white-collar work behind bars, documenting and submitting the jail's food orders. "That was easy," he says.

After serving nine months of a two-year sentence, he was released and deported. Local businessman Frank Griffiths, Arthur's father, bought the Canucks because he didn't want another American to do so.

"He said, 'I really feel like it's important for this team to be owned locally,'" the young Mr. Griffiths recalls.

A Cup win, Mr. Quinn believes, will cement the tradition of a team that has suffered through bad seasons and middling fan support. "If they win the Cup, what it does for me is legitimize the tradition and history that's being going on for 40 years," he says. "And it's had its ups and downs."

Mr. Scallen was pardoned in 1982, and still dismisses any suggestion of wrongdoing. "It was a pure political play," he says, designed to chase the American owner out of town.

He hasn't been to a game for several years, although the Canucks visit division-rival Minnesota regularly, and he owns virtually no team memorabilia. This week, however, has stirred a sense of nostalgia.

Were he not jailed, he says, he'd have tried to keep the team. Now his only legacy is in the Canucks' jersey crests, a logo Mr. Scallen selected. On Wednesday, he'll be in his study, watching - on the HD television in the French armoire - and cheering for his former team.

"I would not have sold, because I believed in the team, and I believed that with good management we could be a contender," he says, smiling. "I figured, eventually, they'd get there."

With a report from Rick Cash in Toronto

Canucks inaugural owner Tom Scallen on the team, the city and his unceremonious departure

"I said, 'From what I see, it's a win-win situation. And I'll tell you guys, I know Vancouver. We'll sell out the building.'" - after agreeing to front $6-million to bring hockey to a city he barely knew.

"Pat wasn't much of a skater, but he was a great defenceman." - on Pat Quinn, his favourite Canucks player.

"We moved the money to a U.S. bank. It was a perfectly legal thing to do and we disclosed it in our annual report." - on moving money from a Canucks stock offering.

"You'll not get a fair shake up there. Just stay out of Canada for the time being." - the advice of fellow American Clarence Campbell at the time. Mr. Scallen chose to fight the charges, lost and was jailed.

"I didn't blame the people of Vancouver, who didn't know really anything about it. I like the fans there. I like the city." - on the fallout.

"Of all the dumb things. That's a hockey town. It's not a basketball town." - on the team's subsequent owner acquiring a National Basketball Association team, which was a flop.

"It's a toss-up. I don't know which way it's going to go, but it will probably be a very interesting series." - on the Stanley Cup final.

"If I owned that franchise today, I would never have built that goddamn new arena. I'd still be out at that old Pacific Coliseum. Listen, it's a nice building, and the price was right. And we never had a losing year, which is more than [other owners]could say, in the bank book." - on the Canucks' new home.

"You know, I haven't talked about Vancouver in a long time. I just haven't." - reflecting on the team on the eve of its Stanley Cup final series. 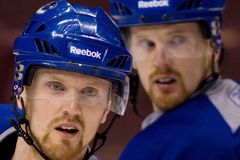 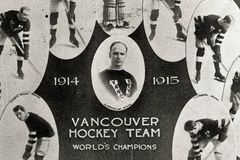 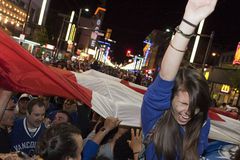