A giant hunk of metal jutted up 9 1/2 feet into the air off Long Beach in Tofino, B.C. Its guts were made of Styrofoam and refrigeration mechanics. Here lay the remnants of a human-made structure in one of Canada's most sublime settings.

Where did it come from? The container's origins tell the story of garbage in the ocean, the beleaguered shipping industry and the challenges of responding to maritime accidents effectively, as Canada attempts to boost trade with Asia. The tale highlights the realities surrounding ocean mishaps at a time when the Trans Mountain pipeline extension approval is opening the door to potential increases in Pacific traffic.

On Nov. 3, the Hanjin Seattle cargo ship got caught in stormy seas and lost 35 containers overboard. They plopped into the ocean eight nautical miles off the West Coast near the mouth of the Strait of Juan de Fuca.

Related: Why Canada's economy would wither without the port of Vancouver

According to public tracking websites, the last voyage undertaken by the container that washed up last month on Long Beach – known in the shipping world as HJCU6132645 – started with a long haul from India to California. It began July 4 in Chennai. The container set off into the Bay of Bengal on the Maersk Sentosa, arriving at a Singapore port by 4:10 p.m. on July 14. Seven days later it would board the ship that would ultimately lose it, the Hanjin Seattle.

The container carried 15,290 kilograms of Indian-made motorcycle and other vehicle parts across the Pacific Ocean on the 587-foot-long vessel before arriving in Los Angeles. It was unloaded and taken by truck to California's Long Beach.

And then it got stuck.

Too many boats floating around

Global shipping companies have been grappling with a tough business climate in recent years. China's economy isn't growing as fast as it once was, and that has had a huge impact on trade everywhere. The country's exports fell just less than 2 per cent in 2015, but imports plunged more than 13 per cent.

Yet, cargo transport firms keep building bigger and more fuel-efficient ships in a race to carve out their share of the pie that's left. Plenty were ordered as the industry emerged from the global recession. That has left too many boats floating around for the quantity of goods demanded by consumers. Cheap fuel, because of slumping oil prices, has helped struggling companies carry on. But when Korean firm Hanjin Shipping Co. started to take on water, the government's banks decided against bailing it out.

Hanjin, the seventh-largest shipping company in the world with 74 container ships and 15 bulk cargo carriers, filed for bankruptcy at the end of August. It was the biggest container-carrier failure in history.

The receivership left an estimated $14-billion of cargo stranded at sea. At that point, the future of the refrigeration unit stuck on a Californian dock was uncertain, at best. Tug operators, pilots and terminals weren't interested in dealing with a company that couldn't pay up front.

Eventually, Hanjin stockholder Korean Air Lines pitched in $54-million to pay docking and handling fees at ports around the world.

The Hanjin Seattle worked out a deal in which it could drop off some full cargo boxes in Seattle and load some empty ones on board.

"These empty containers have been stacking up," explained Tara Mattina, communications director for the Northwest Seaport Alliance.

The products on board the ship were likely destined to be wrapped and placed under American Christmas trees.

"This time of year, the Targets, and the Wal-Marts and the Home Depots of the world are filling their shelves with the holiday shopping items," Ms. Mattina said.

On Oct. 26, the empty Tofino container was loaded on the Hanjin Seattle from Long Beach, Calif., and began the journey back to Korea.

The Hanjin Seattle hoped to make a pit stop in Vancouver before crossing the Pacific, but it didn't quite make it. The ship hit turbulent waters near the Canada-U.S. border Nov. 3. That's where it lost the 35 cargo boxes overboard.

"It doesn't surprise me that a lot of the containers that tipped off would have been empty," Ms. Mattina said. "They were trying to get some of those empty containers back to Asia. And empty containers are also lighter, so they're easier to topple than the full containers."

They began to drift and break up near Pachena Point, south of Barkley Sound. Meanwhile, the ship was backtracking to Seattle.

It docked Nov. 13 and had 29 containers removed. These additional casualties of the storm had either suffered damage or needed to be examined before cranes could carefully restack them on the ship like Lego blocks.

'The responsibility lies with the owner'

Rachelle Smith, communications manager with the Department of Fisheries and Oceans Canada, said Hanjin didn't provide a reason why the containers went overboard.

The Coast Guard's job is to alert mariners to potential dangers, not to collect containers, which it considers essentially part of the ship, she explained.

"The responsibility lies with the owner," she said, noting as of Nov. 14 she hadn't received any reports about DFO staff monitoring the spill for environmental effects. Ultimately, Transport Canada said it has asked Hanjin to contact Parks Canada about cleaning up the reefer remains in Pacific Rim National Park.

The debris, however, was spread further afield – from Vargas Island to the north to the Broken Group Islands to the south.

"It's washed up on the beach? Wow," Simon Reid, a Hanjin Shipping equipment control representative, said when he learned about the location of the company's property.

He was aware of the Nov. 3 incident from interoffice banter, but didn't know about the Vancouver Island connection.

Mr. Reid said it has been an interesting time to work at Hanjin. Employees aren't sure whether the pending sale of its shipping business will go through, or whether they'll get to keep their jobs. Things have finally calmed down after the initial bedlam of the bankruptcy and the company is now strategically moving a lot of empty containers around the globe.

When asked how regularly Hanjin loses cargo over the side of its ships, Mr. Reid replied: "I wouldn't say it happens often, but it's not real uncommon."

Cleaning up the beach

A gentle rain fell on the 30-strong group decked out in colourful outdoor wear in the Schooner Cove parking lot. It was just after 9 a.m. on Nov. 19 and people were buzzing with excitement. In the wake of the Hanjin Seattle container spill, Surfrider Foundation's Pacific Rim chapter had been summoned to clean up the beach.

It had already been two weeks since the Canadian Coast Guard sent out a "notice to shipping," alerting mariners to the wayward boxes, and at least a week-and-a-half since two containers arrived on Tofino beaches.

It was proving challenging to get in touch with Hanjin, federal agencies were finding. And clean-up efforts were hampered by debris ending up in multiple jurisdictions controlled by various levels of government.

Surfrider was already planning to give the beaches a routine once-over. Now, Parks Canada had charged volunteers with a more urgent task.

The biggest ecological concern raised by the reefer appearances was Styrofoam, according to Renee Wissink, manager of resource conservation for Pacific Rim National Park Reserve.

"Once it breaks down into those very small pieces, it can be taken up by either marine or terrestrial mammals – fish, birds, whatever mistakes it for food," he said. "It basically gums up their systems."

Tofino Mayor Josie Osborne joined the clean-up effort with a friend. She noted the Long Beach container mess is just one piece in the onslaught of junk that washes up.

Ms. Osborne said it seemed like well-meaning government officials were a bit unclear about what to do when something like this happens.

"There doesn't seem to be a co-ordinated response to spills of any kind," she said.

"You've got Coast Guard, Parks Canada and Transport Canada. That's three departments of the federal government that all have some role here but, but to be honest, I don't really know who does what. And it seems like not very many people do know."

The incident has revealed there isn't an organized process in place at the federal level for notifying First Nations communities about maritime mishaps, according to Juliet Van Vliet, director of lands, public works and resources with the Toquaht Nation.

She added that's important in light of potential increases to shipping traffic in coastal waters, such as the Roberts Bank Terminal 2 Project, a Delta B.C. facility expansion that would be additional storage for the equivalent of 2.4 million more cargo containers. "It's unfortunate," she said. "It'd be nice to have all communities notified of any spill in a timely manner."

Tla-o-qui-aht First Nation officials also expressed concerns they hadn't heard via official channels about the container debris, which landed in their traditional territory.

In just two hours, about 50 people had collected a total of 490 kilograms of trash, including 14 garbage bags of miscellaneous stuff, a giant net, a rope with 13 marine floats attached, a wheel hub, an entire bicycle, a tarp, countless bottles and cans, and five buckets filled with pieces of plastic. The biggest standout was the hunks of Styrofoam – 12 giant bags worth.

"It's a real grey area: Who cleans up the beaches, the waters?" said Nancy Woods, volunteer co-ordinator for Surfrider Pacific Rim. "Like, who is in charge of this?"

It's been a month since HJCU6132645 was tossed into the sea. Its debris now sits in a parking lot off Long Beach, waiting for someone to haul it away. 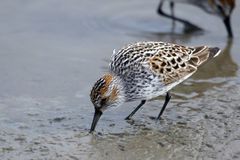