Climate change and freedom of expression shouldn't be factors in considering an injunction application against protesters blockading pipeline work through Metro Vancouver, a lawyer told a B.C. Supreme Court judge.

Instead, lawyer Bill Kaplan, representing Trans Mountain, a subsidiary of energy giant Kinder Morgan, said the court should scrutinize the concerted effort by protesters to stop the company from its lawful activities, which he described as "a conspiracy to harm."

"There may be an environmental objective that motivates the people generally," Kaplan told Associate Chief Justice Austin Cullen on Wednesday. "But the actual specific dominant purpose here ... is to harm Kinder Morgan by preventing Trans Mountain (from doing) its work."

Five protesters, including two Simon Fraser University professors, are named as defendants in the court action that precedes a multimillion-dollar civil lawsuit over claims of trespass, assault and intimidation against employees prevented from conducting survey work through a conservation area on Burnaby Mountain.

The protesters belong to a group calling itself the Caretakers of Burnaby Mountain. Around-the-clock demonstrations have been mounted since late September, with encampments around two bore hole sites and portion of an adjacent park where Trans Mountain has approval from the National Energy Board to conduct field studies.

The company went to court after incidents over two days in late October. Kaplan alleged protesters wielded tactics ranging from blasting a megaphone near workers' ears to a man chaining himself under a work vehicle. Protesters used social media and phone networks to organize opposition, he said.

Kaplan told the court that erecting protest signs on the mountain constituted free expression, but then presented photographs of the protesters with facial expressions he said were malicious.

"One of the things I will argue is that is not only intimidation, but that is actually an assault," he said. "Some of the faces demonstrate the anger, and frankly, the violence demonstrated by some of the people."

As Kaplan presented his evidence, supporters of the demonstrators in the packed gallery frequently burst into laughter and called out snide remarks. They erupted in applause as Kaplan read a note posted online by defendant Stephen Collis, an SFU English professor.

"I don't care right now about the National Energy Board of Canada, merely a corporate tool for shoehorning global energy projects into other people's territories, a funnel for money from the public to the private sector," Kaplan quote Collis.

The proceedings were held in a courtroom usually reserved for high-security cases with thick Plexiglas shielded the court from the noise.

Before the hearing began, Collis led a rally outside the court, urging further public support for the group in its fight.

Within four days the Caretakers have raised $40,000 from 600 separate donors for legal costs, and garnered support from 100 environmental and labour organizations, he said.

But he acknowledged that winning the case would be an "uphill battle," noting judges in B.C. have often granted injunctions in the resources sector.

"It's a low threshold, it's a hard case to make. But we have an awful lot of things to bring against this," he said. "Our lawyers are going to bring it all out."

If the injunction is granted, individual protesters would make their own decisions on whether to obey, he said.

Defendant Lynne Quarmby told the placard-waving crowd outside the court that she believed she was "targeted" in the suit because she had spoken out against climate change.

"I don't think Kinder Morgan wants you to hear what I have to say," said Quarmby, who chairs SFU's microbiology department. "I think that is why they are trying to silence me."

The pipeline would almost triple the capacity of its existing pipeline between Alberta and B.C. to 900,000 barrels of crude a day. The NEB granted approval for Trans Mountain work including geophysical mapping, drilling of bore holes, groundwater investigation and surveys of wildlife, soil, vegetation and archeological impact.

The company says it wishes to fence off areas for the work and post safety signs, but alleges the protesters have threatened further confrontation if they go forward. The hearing is expected to last through to Friday. 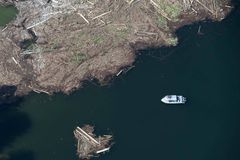 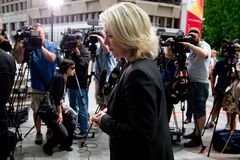 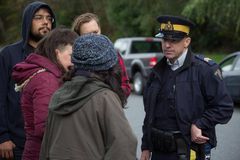 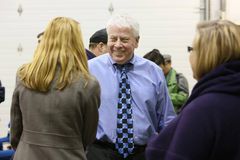