The tax increases and fare hikes may be modest – a few dollars here, an extra couple of dimes in the fare box. But Lower Mainland mayors did something this week they swore they would not do: They turned to property taxes to fund the first phase of their 10-year transit plan.

What's more, regional transportation authority TransLink is picking up the lion's share of the $2-billion cost, with the federal government contributing $370-million and the province kicking in $246-million.

It's a far cry from the one third-one third-one third formula the mayors and the province have talked so much about, the sort of formula that funded the long-awaited Evergreen Line, which was approved by the TransLink board 10 years ago and is finally set to begin service on Dec. 2. In that case, the province ended up picking up about $100-million more than its share of the $1.4-billion cost.

Yes, it's good that all levels of government have finally agreed to move forward on transit improvements. And yes, it's good that the federal government's contribution appears to have been what finally got the wheels in motion. But adding more buses and SkyTrain cars and even a third SeaBus isn't going to solve the Lower Mainland's transportation woes. It's a start – the modest scope of the improvements means services can be put into place relatively quickly – but given where the system is now, I'm guessing demand will outstrip supply as soon as any new services are introduced. We're playing catch-up. Anyone who has waited for a train at the Commercial-Broadway station or has ridden the Canada Line in the morning knows this.

Most municipalities have dutifully followed the regional growth strategy – concentrating density along the major transit routes. But with the rate of development in Burnaby and the planned developments at Oakridge, the former RCMP "E" Division lands and the Coast Mountain Bus Company property in Vancouver, demand for transit is about to take a giant leap forward. And I haven't even mentioned the areas south of the Fraser River not served by rapid transit.

Because of the state of the transit services, and with the failure of last year's referendum, the Mayors' Council had little choice but to turn to property taxes and the fare box. The province forced them into it.

Remember the province's $14-billion transit plan unveiled by then-premier Gordon Campbell in 2008? I do. It was a big day. At its core was $10.3-billion dedicated to the Evergreen Line, a new UBC Line and improvements to rapid transit. An additional $1.3-billion would go toward a new fleet of clean-energy buses. The plan, we were told at the time, would reduce greenhouse gas emissions by 4.7 million tonnes by 2020. It would get people out of their cars and on to transit.

What we need now is that kind of commitment – but this time we need the province to actually follow through on it. What we have instead is TransLink and the Mayors' Council hamstrung by the insistence that any new source of funding require another referendum.

Peter Fassbender, the minister responsible for TransLink, told me this week that he is ready to sit down with the mayors and look at long-term transit needs. He also said he's ready to hear ideas about new sources of revenue, but he didn't change his tune on a referendum.

I suppose it could be argued that the tolls charged to cross the 10-lane bridge that will replace the Massey Tunnel are a new source of revenue, but the province hasn't seen fit to put the bridge's $3.5-billion price tag to Lower Mainland voters.

Vancouver Mayor Gregor Robertson reminded me that some of the money announced this week will go toward the engineering and planning of new rapid transit lines for Vancouver and Surrey. But I'm not holding my breath.

The 10-year Evergreen Line process and the debacle that preceded the construction of the Canada Line are sure to be repeated. History tells me that. 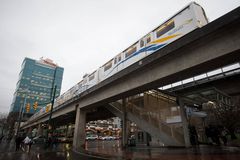