It took one year, eight months and three days to agree on the plan, the question and the money source for a transit-financing vote in the Lower Mainland.

But at last, the province has approved a plebiscite, more or less on the terms that regional mayors have agreed on over the past year.

Premier Christy Clark made it part of her election campaign in 2013 that any new transit financing would have to be put to a local vote.

So local residents will be asked to endorse a new half-per-cent sales tax, called the Metro Vancouver Congestion Improvement Tax, to pay for the regional share of a $7.5-billion package of big new transportation projects.

The mail-in vote will take place over an unusually lengthy 10-week period, from March 16 to May 29. 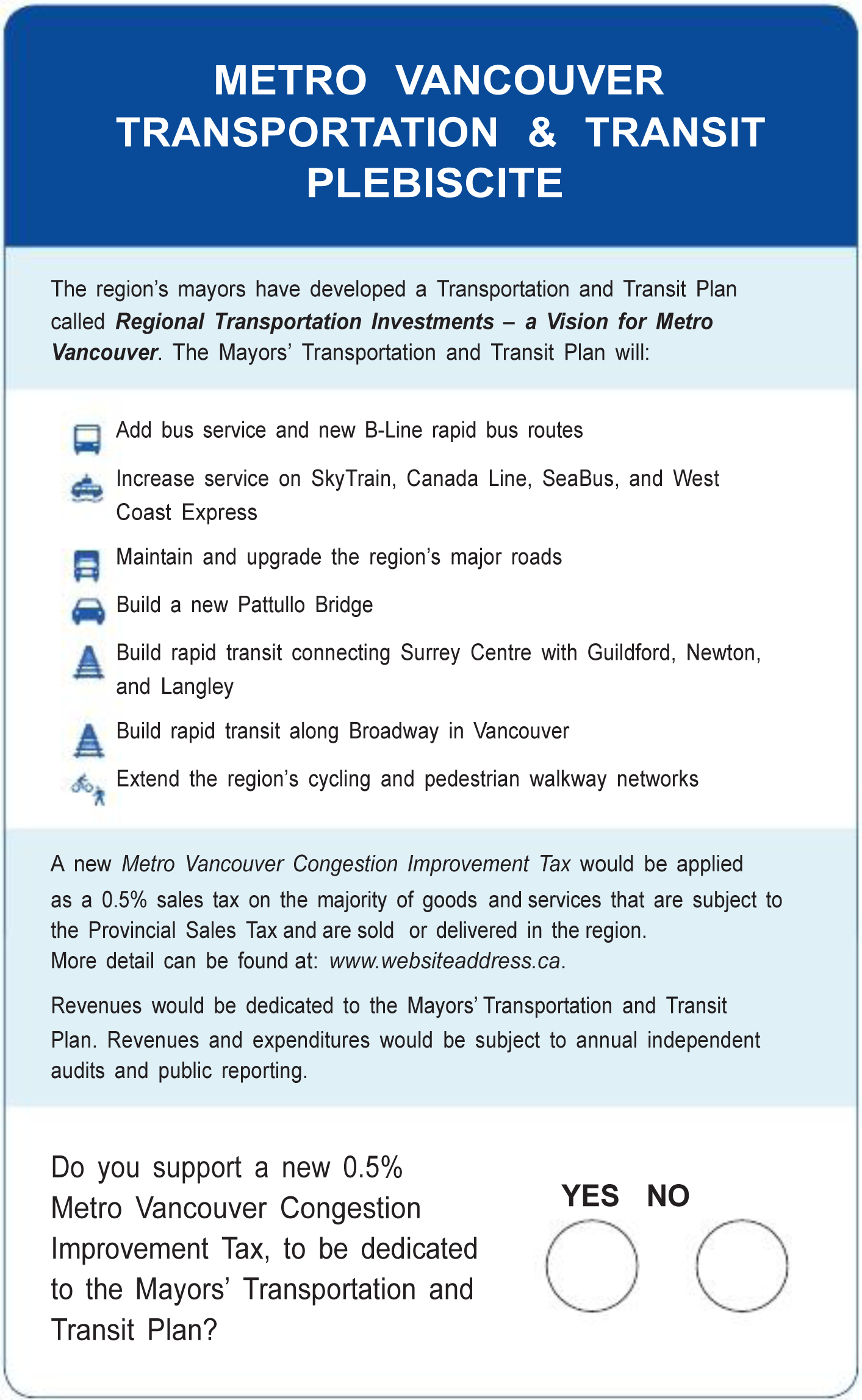 Now, say people in the broad coalition that is pushing for a Yes vote, the trick will be to mount a strong education campaign about the benefits for local residents, in the face of resistance to new taxes and concerns about mismanagement at the region’s transportation authority, TransLink.

“A lot of work will happen on this between now and Christmas. [Our coalition is] an odd group, but the fact that we can work together on this is intriguing.”

The coalition includes the B.C. Federation of Labour, most local mayors, the Vancouver Board of Trade, the David Suzuki Foundation, student and other environmental groups, and one of B.C.’s notorious anti-tax crusaders, communications consultant Bill Tieleman.

Mr. Tieleman was a prime mover of the popular revolt against the province’s harmonized sales tax, which was repealed after a referendum last year.

About 50 per cent of the province’s eligible voters sent in ballots for that referendum, with the HST getting a thumbs down from 55 per cent of them.

The local branch of the Canadian Taxpayers Federation is expected to be a linchpin of the opposition, but it’s unclear whether organizations such as the Retail Council of Canada or hotel and restaurant associations will join in.

The province’s decision to approve the question, which was announced Thursday morning, was quickly greeted with enthusiasm by mayors and the labour federation.

It was also accompanied by dire visions of what will happen if the plebiscite fails.

“The alternative is crippling traffic congestion, more air pollution, cuts to transit and lost economic opportunity,” said Vancouver Mayor Gregor Robertson in a news release. “The future of our region’s economy and environment is at stake in this transit referendum.”

It’s not clear yet exactly how the Yes and No campaigns will operate or be funded.

Mr. Winter said his group will likely raise most of what’s needed from the private sector.

“We have the potential to raise enough money,” he said.

He said there’s a lot of misinformation out there now, which the Yes group will need to tackle in its campaign.

Besides the basic issue of whether people are willing to pay an additional tax for transit improvements, both sides are still trying to figure out what exactly is meant by some of the small changes the province made to the ballot wording.

The province’s revised ballot question says the new tax would be imposed on “the majority of goods and services that are subject to the Provincial Sales Tax,” leaving some wondering if that means some items that get charged PST will be exempt from a transit tax.

Metro Vancouver chair Greg Moore, who oversaw the development of the mayors’ transit plan to be funded by the tax, said it’s his understanding that the transit tax would cover the same items as PST.

That’s important because if too many items were exempted, he said, the tax wouldn’t generate the $250-million a year needed for the plan.