Three years after Japan was struck by a devastating earthquake and tsunami, washing millions of tonnes of debris into the Pacific Ocean, officials in B.C. say far less of that debris has reached our shores than expected.

Despite that finding, Environment Minister Mary Polak on Tuesday announced $270,000 in funding for the Great Canadian Shoreline Cleanup. The group, led by the Vancouver Aquarium and World Wildlife Fund, has launched a tsunami cleanup project and the funding will cover supplies and transport volunteers and debris along remote areas.

Though the purpose of the news conference held at the aquarium was to highlight cleanup efforts, those who spoke agreed B.C. had not seen as much tsunami debris as feared.

"So far we haven't seen what was originally predicted," Jill Dwyer, manager at the Great Canadian Shoreline Cleanup, told reporters.

Ms. Dwyer said the currents along the B.C. coast have pushed much of the tsunami debris north toward Alaska or south toward Washington and Oregon.

She said it's unclear when the bulk of the debris might arrive and John Nightingale, the aquarium's president, said some of it might simply have sunk.

"A lot of the debris that was either very light, like some of the foam materials, or stuck up above the water, both of those got a wind assist across the Pacific so they arrived here earlier," Mr. Nightingale said.

"The theory was then that some of the more water-logged debris that was barely breaking the surface or even coming across at the surface or below the surface would take longer. With the amounts not yet showing up that everybody predicted, the question is: Has some of that stuff sunk out on the way over?"

The tsunami struck Japan in March, 2011, and five million tonnes of debris are believed to have been swept into the water. About 70 per cent is believed to have sunk along the Japanese coast, which would have left about 1.5 million tonnes floating in the Pacific Ocean. Reports surfaced in late 2011 that plastic bottles, lumber and other debris with Japanese characters had reached the shores of the tourist destination of Tofino, B.C.

The government of Japan in November, 2012, pledged $5-million to the United States for tsunami debris removal. Japan announced $1-million for Canada in March, 2013. The $270,000 announced Tuesday comes from that $1-million grant.

Akira Uchida, deputy consul-general at the Japanese consulate in Vancouver, was at the news conference and said afterward he was satisfied with how the money is being spent. About $650,000 has now been awarded.

Ms. Dwyer said getting debris out of remote areas can be difficult, since some areas don't have road or easy boat access. She said the funding will help cover that.

Josie Osborne, mayor of Tofino, said in an interview that the amount of marine debris her community has seen hasn't been as bad as feared.

"It was interesting to hear the big pulse is expected," she said by phone. "… That big pulse has not yet come."

Caught on camera: Skiff believed to be tsunami debris washes ashore Gallery
May 11, 2018 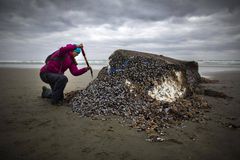 Japanese officials sifting through tsunami debris on B.C. coastline
May 11, 2018 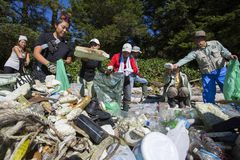 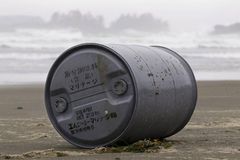 Lost and Found: Documenting the return of Japanese tsunami objects
May 11, 2018 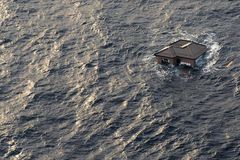 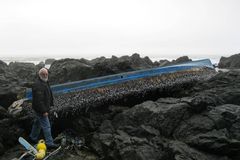