The risk to British Columbia as a result of the earthquake in Japan appears to be easing as a spokesman for the provincial emergency program said waves were minimal, though a tsunami advisory remains in effect.

"No damage has been reported in areas where the waves are coming in. Wave sizes are small and under a metre," Glen Plummer said Friday.

Mr. Plummer said the advisory remained in effect for Haida Gwaii, the west coast of Vancouver Island, the central coast and the northern coast.

He said officials are getting constant updates from the West Coast and Alaska Tsunami Warning Centre, a division of the U.S. government. "When they give us the all clear, we will proceed from there," he said.

"While we may not see high waves, we always have to be prepared for the possibility that something like could happen," Mr. Plummer said earlier in the day.

The town of Tofino, on the west coast of Vancouver Island, told marinas, beaches and any other area that is below the normal high-tide mark to evacuate. However, the first impact of the tsunami did not threaten the town - but it created a spectacular vista of stormy seas.

In Port Renfrew, on the southwest coast of Vancouver Island, residents were wakened by a tsunami siren in the middle of the night. Volunteer firefighters went door to door ensuring that those in homes close to the water to pass on the evacuation warning.

Families and pets gathered at a community school and recreation centre to sleep on mats.

Along Highway 14, vehicles were stopped and warned to avoid beaches. One firefighter was checking for surf boards. "We don't know what is going to happen." But at Jordan River, surfers were out in their usual numbers. The waves were elusive.

Ted Mehler, San Juan district emergency co-ordinator, stood sentry at the Cobe bridge, scanning the horizon. "If this bay starts to empty, you have about three minutes to run," he advised.

By 8:30 am PT, he shrugged his shoulders and packed it in, heading home for some sleep.

In Port Alberni, where a 1964 tsunami swept away homes and swamped businesses, residents and emergency crews were on alert.

The community, located on a narrow, 60-kilometre inlet open to the west coast's Barclay Sound, is one of the most tsunami-susceptible developed areas in the country.

A warning system, consisting of sirens that would warn people to get to higher ground, is in place in the community.

The call to activate the system would be made by the province, Russell Dyson, director of Alberni Valley Emergency Operations Centre, said Friday.

Residents of the area are aware of the system and have studied routes to get to higher ground if necessary, Mr. Dyson said.

"They know where the higher ground is," he said, adding that emergency crew staff would assist by managing traffic and erecting barriers to prevent people from returning to potential inundation areas.

A statement issued on behalf of Prime Minister Stephen Harper said government officials are "liaising with authorities in the west coast in order to carefully monitor tsunamis in the Pacific."

The Prime Minister also offered condolences to those affected by the earthquake and tsunami, and said Canada will "stand by the people of Japan during this difficult moment."

The magnitude-8.9 earthquake and a devastating tsunami across northern Japan early Friday has caused massive destruction and dozens of deaths.

A tsunami warning has been issued for much of the Pacific Rim, including Hawaii, New Zealand, the entire U.S. western coast, Mexico and Central and South America.

Many islands in the Pacific evacuated after the warnings were issued, but officials told residents to go home because the waves weren't as bad as expected. But the size of Hawaii's islands is expected to amplify the waves, which will crash hardest against harbours and inlets.

The warnings issued by a Hawaii-based warning centre cover an area stretching the entire western coast of Canada and the U.S., from the Mexican border to Chignik Bay in Alaska.

In Alaska, a dozen small communities along the Aleutian Island chain were on alert, but there were no reports of damage from a wave of nearly two metres.

Officials in two coastal Washington counties used an automated phone alert system, phoning residents on the coast and in low-lying areas and asking them to move to higher ground.

"We certainly don't want to cry wolf," said Sheriff Scott Johnson of Washington's Pacific County. "We just have to hope we're doing the right thing based on our information. We don't want to be wrong and have people hurt or killed.

In Oregon, sirens blasted in some coastal communities and at least one hotel was evacuated in the northern part of the state. 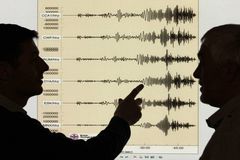 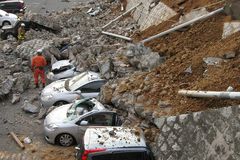 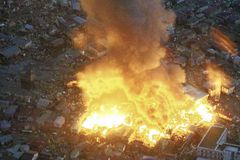 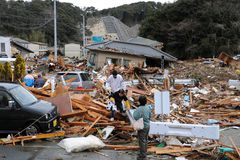 Follow Ian Bailey, Wendy Stueck and Justine Hunter on Twitter @ianabailey @wendy_stueck @justine_hunter
Report an error Editorial code of conduct
Due to technical reasons, we have temporarily removed commenting from our articles. We hope to have this fixed soon. Thank you for your patience. If you are looking to give feedback on our new site, please send it along to feedback@globeandmail.com. If you want to write a letter to the editor, please forward to letters@globeandmail.com.
Comments