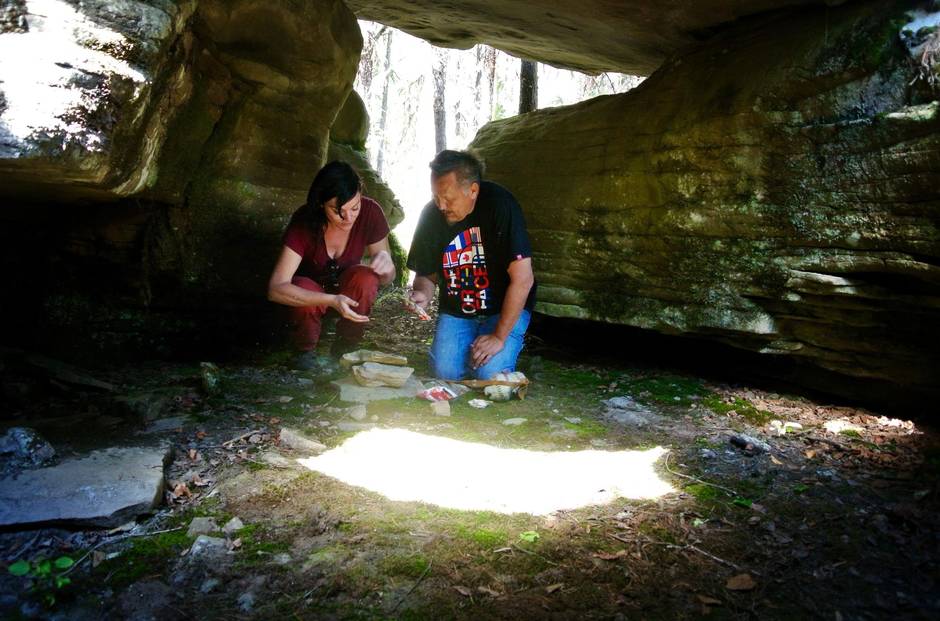 Karen Aird and Art Napoleon, both of the Saulteau First Nation, hold a blessing ceremony in a rock shelter discovered near Tumbler Ridge, B.C. (Mark Hume/The Globe and Mail)


A cave of mysteries


Researchers have discovered what appears to be a significant historic
cave near Tumbler Ridge, B.C. But as Mark Hume reports, they still
don't know who made it, when it was built — or why


When Charles Helm saw the blue bones under the rock overhang, he knew that he had found something special.

But that find, made last fall by a family doctor who is British Columbia’s real-life version of Indiana Jones, turned out to just be the first of several discoveries – including an ancient stone shelter – that are now drawing the interest of geologists and archeologists to a remote river valley in the eastern foothills of the Rockies.

“Bones turn this remarkable blue colour when they are burned,” Dr. Helm said in an interview as he raced down the Murray River recently in a jet boat. “Yes, they could have been from an animal that got caught there during a forest fire, but I think that’s a remote possibility. The most likely explanation is that they were burned there in a campfire by early people.”

As he spoke, pilot Randy Gulick slid his boat at high speed around a rock bluff and plunged deep into the Murray River Canyon, where a dramatic landscape is revealing some tantalizing prehistoric clues. Along on the expedition were research scientists and First Nations representatives who over the years have learned that when Dr. Helm gets excited about a find, it’s usually for good reason.

Originally from Cape Town, South Africa, Dr. Helm and his wife, Linda, moved to Tumbler Ridge in 1992. Since then, he has made a name for himself by finding, and helping build trails to, ancient fossil beds and dinosaur footprints.

In 2000, his son Daniel, then 8, and a friend, Mark Turner, then 11, discovered a dinosaur trackway that featured a series of prints left by ankylosauruses, armoured dinosaurs that lived in the area 96 million years ago.

Dr. Helm, who in 2011 won an award from the B.C. Paleontological Alliance “for outstanding contributions by an amateur to the science of paleontology,” spearheaded a campaign that last fall saw Tumbler Ridge named a UNESCO Global Geopark, an area recognized by the United Nations as having geological features of international significance. 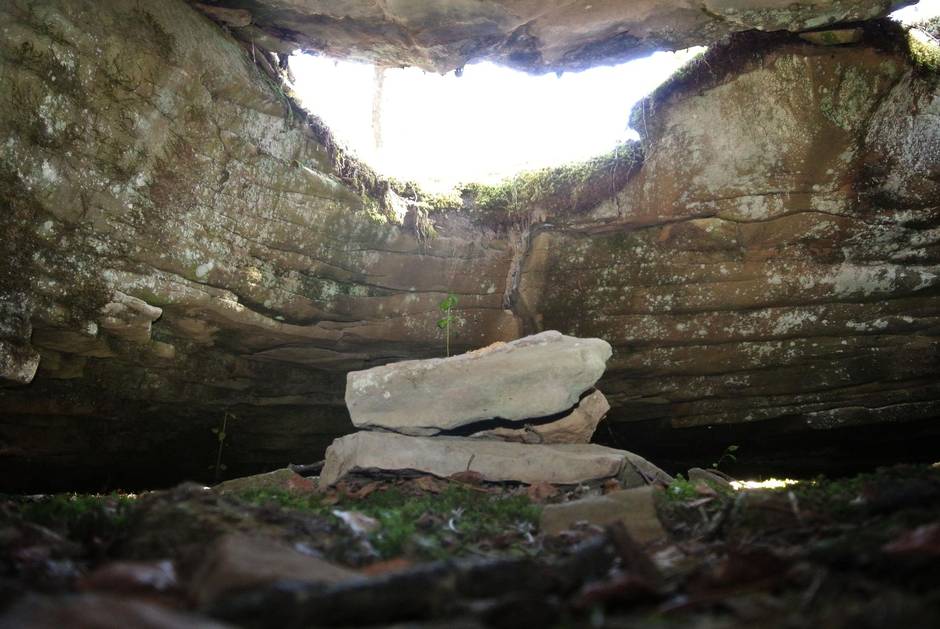 A small stack of rocks was found carefully placed inside an ancient rock shelter. (Mark Hume/The Globe and Mail)

That designation was made before he stumbled on his latest finds – discoveries that he says have astonished him.

One day last year, Dr. Helm was out rambling along a ridge high above the Murray River. “My wife kept saying, ‘I want to go down to the river.’ In the process, we found this rock overhang with blue bones in it,” he said. “Then we looked across the river and saw this remarkable geological feature and, of course, we had to explore.”

He swam across the river, hiked up to the top of a cliff and stopped in his tracks. “We found these columns, amazing rock formations, and then I found this series of potholes. What are potholes doing 200 feet above the river? This is so amazing and weird … it’s just so bizarre. You don’t have anything like it in this region,” he said. Some of the potholes were full of rainwater, others with a profusion of plants.

Dr. Helm later returned with Karen Aird, a cultural heritage adviser for the Treaty 8 Tribal Association, Jonathan Driver, vice-president of Simon Fraser University whose research includes digs at a B.C. cave where human use dates back 11,000 years, and Rémi Farvacque, director of Archer CRM Partnership, a consulting firm based in northern B.C. that does archeological research.

The group was impressed by the rock overhang with the burned bones and by the potholes, an unusual geological formation created by flowing water. Near a stone pillar that would have made an ideal lookout for ancient hunters, they found a small black flake – a chip that Mr. Farvacque said was created when someone “knapped” or chipped at a piece of stone to make a tool or arrowhead.

Then Mr. Farvacque broke away from the group to have a smoke – and let out a yell. There carved out of the rock face by natural forces was an hourglass-shaped opening, and inside was an almost perfectly round grotto. Forming a roof was a huge flat slab of stone that left a small, crescent shaped opening through which a beam of sunlight poured. And on the floor, directly in line with the advancing shaft of light, were three carefully placed rocks that formed a rough pyramid-like structure a little more than a metre high.

“We’d never seen anything like this before,” Dr. Helm said of the shelter, which has smooth, curved walls. “And right in the middle there are those three rocks piled on top of one another. That’s when you get the shivers down the spine, realizing there were people here before. There’s this amazing connection with deep time.” 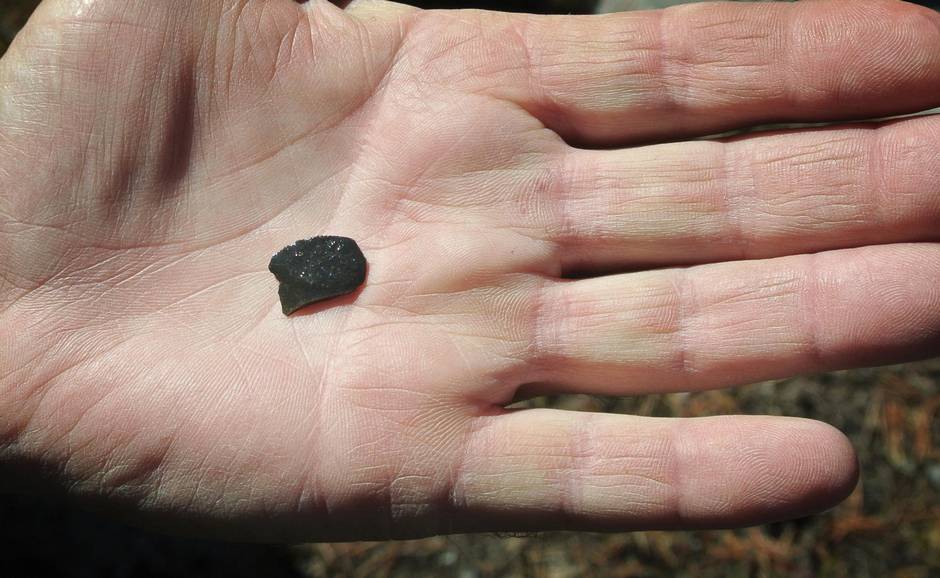 Sign of early people. Archeologists found a tiny chip of black stone, possibly thousands of years old, that was left by someone creating a stone tool. (Mark Hume/The Globe and Mail)

On the return visit with Dr. Helm, Mr. Farvacque said he is not sure what to make of the rock shelter and its small, carefully placed cairn. He agreed that it is an extremely unusual geological formation, the likes of which he has never encountered before, and that it has been used by humans.

But when and how remain mysteries. “I’m very conservative in my assessment. They [the stacked rocks] were here when we found the structure. But whether they were put here by a trapper 50 years ago, or by someone 300 or 10,000 years ago, we don’t know,” he said.

Ms. Aird said archeological research will be needed to determine how the site was used, but her theory is it was a place used for ceremonies by early people “This is really a sacred site,” she said as she sat in the small cave. “You can sense that.”

Art Napoleon, a former chief of the Saulteau First Nation and a cultural adviser, agreed. “It’s fascinating. I’d like to know more. I know where I’d start,” he said, nodding to a place in the cave where it would have been natural to build a fire.

There were no apparent markings on the shelter’s walls, but Mr. Napoleon said that if it was used spiritually, it might not have been carved or painted, nor would there be animal bones if it was a place for fasting.

Mr. Farvacque said the shelter sits in the middle of what was probably an area of high use but not high occupancy by early peoples, meaning that it was probably used by travelling hunters and was not a permanent camp.

If an archeological dig is done, he said, it should start well outside the shelter’s entrance and work carefully in. “We just don’t have sites like this, so you want to be very cautious,” he said.

Marten Geertsema, adjunct professor at University of Northern British Columbia and an expert on terrain analysis, said the potholes and the rock columns carved in the nearby cliff face were probably formed by a catastrophic flood, when a glacial lake released a vast volume of water.

“It’s special stuff,” he said of the formations.

Across North America, pothole sites are rare and are usually protected as parks or reserves.

Dr. Driver was not on the most recent visit to the site, but he said it’s a fascinating area that deserves more archeological and geological study.

“It’s a pretty neat place. I think it’s the sort of place one would want to do some very careful exploration to determine if it had been used by earlier people,” he said. “When I looked at those [stacked rocks], there was nothing there to suggest they had been there a long time, but on the other hand that doesn’t mean they couldn’t have been placed there a long time ago.” 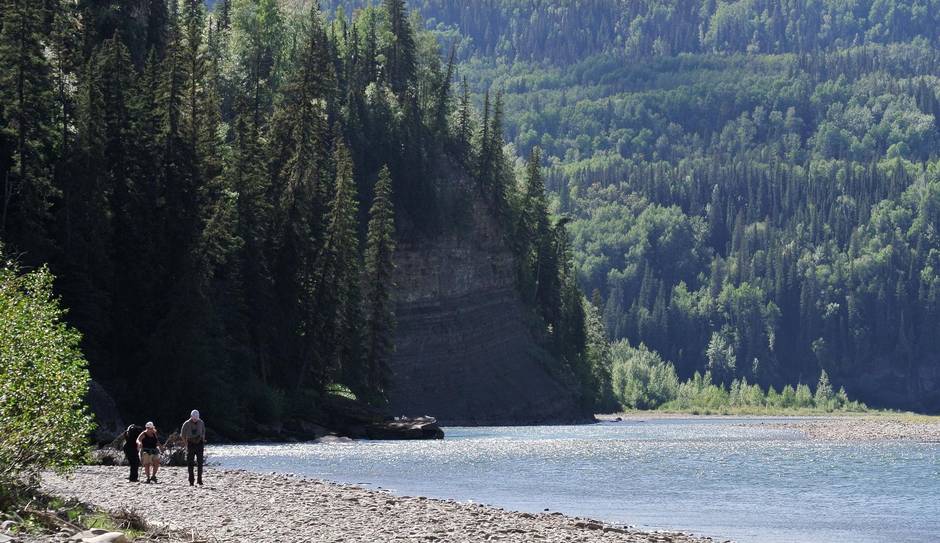 Dr. Driver said it is very difficult just from looking at a site to determine its age and how it was used. That kind of information can be stitched together only by methodical scientific research.

But he said the mysterious rock shelter, the rock overhang with burned bones and the surrounding potholes in the Murray River Canyon are definitely worthy of study.

“If I wasn’t [busy as] the vice-president of my university, I would be very interested in that as a research area,” he said. “There are some very interesting landscape features there which I suspect would have attracted [early] First Nations people for resource gathering and potentially for spiritual activity.”

He said First Nations and government approval would be needed before any scientific work could take place.

Ms. Aird said she plans to take it up with the Treaty 8 leaders and if they agree, she would look for a university or other institution to partner with on an archeological dig.

Dr. Helm said he would like to see the public get access to the remote location. “If Treaty 8 want us to build a trail [to allow public access], we will. But if they feel it’s such a spiritual place we shouldn’t, we won’t,” he said.