Two years before a pair of B.C. sawmill explosions that this year killed four workers, WorkSafeBC warned "a layer of dust as thin as a dime" in a sawmill could cause an explosion hazard.

The warning - included in an April. 27, 2010 series of guidelines on chemical and biological substances – also warns of the destructive nature of the phenomena.

"If combustible dust collects in a building or structure or on machinery or equipment, it must be safely removed before accumulation of the dust could cause a fire or explosion."

The documents note there can be a series of explosions as the pressure from the first blast dislodges additional dust fuel for a second blast from various surfaces.

"This dislodged dust then mixes with air, creating a much larger dust cloud which can then be ignited and react explosively, creating a secondary catastrophic explosion," says the document.

The second blast can be more devastating than the first, say the guidelines, which are focused on combustible dusts at sawmills and related facilities, The document offers advice on dust-collection devices, as well as a reminder of B.C. Fire Code regulations on their use.

It urges operators to asses their facilities, provide written dust-control programs for staff and train staff.

"The dust-control program should be communicated to all workers and include training on the program elements, including hazard awareness, specific safe work procedures, hazcom documentation and emergency preparedness."

Lakeland Mills Ltd. – the site of this week's blast in Prince George – was looking to upgrade its safety equipment to reduce the risk of a sawdust-fuelled explosion but hadn't yet decided how to proceed when the incident occurred this week.

While it had not yet installed new equipment, Lakeland had added staff to the mill-cleaning crew and reviewed cleanup guidelines as part of an ad-hoc response from the forest industry in recent weeks to the January blast that levelled the mill at Burns Lake.

However, the B.C. government waited until the second catastrophe this week to issue provincewide guidelines, inspection regimes, deadlines and, possibly, new regulations.

When an explosion and fire tore through the Burns Lake mill, owners of other mills across the B.C. Interior – including Lakeland – looked at housekeeping and upgrades to address the potential risk of sawdust explosions at mills working with dry wood killed by pine beetles.

"We did ramp up our housekeeping crew," Greg Stewart, president of Sinclar Group Forest, said in an interview. "We were in the process of investigating a vacuum system to install in the mill." He said he didn't know the cost of the equipment to augment the current dust-clearing system. "You're not going to install a system like a vacuum system overnight."

The RCMP concluded on Thursday that there is no criminal cause for the Lakeland mill explosion, and the investigation has been handed over to the Coroners Service and the workplace safety agency WorkSafeBC.

"The mills I have talked to have all taken steps some time ago to mitigate against potential disasters," said John Allan, president of the Council of Forest Industries. However, he said more needs to be done. "I think industry is going to have to come together to figure out a strategy to maintain the economic viability of a huge chunk of the B.C. economy," he said.

"Nobody is waiting for WorkSafe's findings," said Canfor spokeswoman Christine Kennedy. The forestry company with a string of mills in the B.C. Interior launched an extensive cleanup of sawdust and evaluated all its gas lines, she said, before the Lakeland mill explosion on Monday.

The cause of the two explosions remains undetermined, but safety experts noted the potential risk of sawdust after the January explosion at the Burns Lake sawmill, owned by Babine Forest Products. The government turned its attention to that potential hazard this week, noting it is the obvious common factor in the two explosions.

Jobs Minister Pat Bell tersely defended not responding immediately after the Burns Lake blast. "This is the appropriate way forward – it's not time to scare people," he told reporters in Victoria. "I'm not going to speculate on three months ago. I will tell you this – that everyone is very much focused on making sure employees have a safe environment when they go to work today."

WorkSafeBC has not issued a report on the Babine Forest Products explosion, but Roberta Ellis, a senior executive of the agency, said inspectors did follow up with mills that are also processing wood killed by the pine beetle.

"The very unusual set of circumstances is to have two sawmills in northern British Columbia experience catastrophic fires and explosions three months apart," Ms. Ellis said. "That's what has spurred a directive order to every employer in the sector. It's an unusual step and a forceful step."

WorkSafe and industry officials are to meet next week to discuss setting potential standards for combustible dust. Those talks will include discussion of beetle-killed wood and how dry it is.

The Interior industry has already been struggling with a massive shift since the mountain pine beetle began the widespread destruction of B.C.'s forests. Now, in addition to the economic impact, they are looking at potential new safety risks because the sawdust from the dead wood appears to be creating a more volatile work environment.

Almost half of the wood feeding B.C.'s Interior sawmills is already dead due to the pine-beetle infestation, and industry analysts expect that wood to run out soon.

"This means that sawlog availability will be dramatically less for existing sawmills. … Further industry rationalization is expected if the economics of surviving mills cannot afford the rising cost of fibre and/or the alternatives," the report states.

Since 2005, 22 mills have closed in the Interior due to economics – that does not include the two mills that were destroyed this year. What remains is an industry that still employs an estimated 140,000 people, when spinoff jobs are counted.

Although the report suggests there are reasons to hope for a turnaround, it is one based on industry survivors, not growth. "Few of these mills will likely ever reopen due to the lack of available timber."

With a report from Wendy Stueck in Vancouver 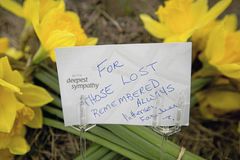 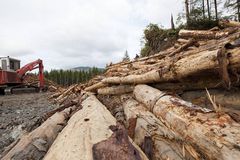 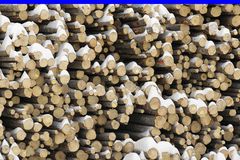 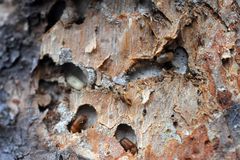 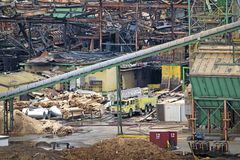 Follow Sunny Dhillon, Justine Hunter and Ian Bailey on Twitter @TheSunnyDhillon @justine_hunter @ianabailey
Report an error Editorial code of conduct
Due to technical reasons, we have temporarily removed commenting from our articles. We hope to have this fixed soon. Thank you for your patience. If you are looking to give feedback on our new site, please send it along to feedback@globeandmail.com. If you want to write a letter to the editor, please forward to letters@globeandmail.com.
Comments