A retired B.C. Supreme Court judge has been appointed to investigate allegations made against author Steven Galloway, who was suspended last month as chair of the University of British Columbia's creative writing program.

The investigator is Mary Ellen Boyd, who retired as a judge in 2012 and is now a lawyer and mediator with the Vancouver firm Singleton Urquhart. Among the areas of practice listed for Ms. Boyd on her firm's website is alternative dispute resolution.

A memo sent to students on Thursday by acting creative writing program co-chair Annabel Lyon said the investigative process is under way and the university "is proceeding as expeditiously as possible."

Last month, the university's dean of arts informed students, staff and faculty that Mr. Galloway had been suspended with pay pending an investigation as a result of "serious allegations" that had come to the attention of the creative writing program and the dean's office. Details about those allegations were not disclosed.

The memo promised a confidential investigation – and offered information to students, staff and faculty on how to seek counselling and support, if needed. It also stressed that no findings of wrongdoing had been made against Mr. Galloway, who is also a well-known novelist.

Thursday's memo refers students who have questions about the process to Kathryn Harrison, the associate dean of faculty and equity.

Efforts by the Globe to reach Prof. Harrison, Ms. Lyon, Ms. Boyd and Prof. Averill (who is out of the country attending a conference) were unsuccessful on Thursday afternoon.

The university had earlier said it would no longer speak to the media about this issue and on Thursday evening, UBC's managing director of public affairs Susan Danard told the Globe that UBC is still not doing media interviews "to maintain the integrity of an impartial, independent investigation and to protect the rights of all parties involved."

The faculty association has taken issue with the process, saying the suspension and the fact that allegations had been made against Mr. Galloway should not have been made public. 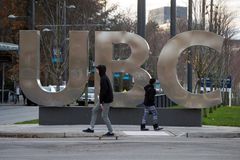