There are grand, formidable creatures in this world, but the skeleton in the main atrium of the Beaty Biodiversity Museum is a sight to behold.

The 26-metre skeleton of a blue whale – in an eternal kind of lunge-feeding pose that would have been routine for this particular creature in life as it roamed the ocean depths – is an inescapable presence for the 30,000 visitors who visit the natural history museum at the main campus of the University of British Columbia each year.

The Beaty museum – named after UBC alum and mining magnate Ross Beaty – opened in 2010, with more than 20,000 square feet of exhibition space. Other lures in the complex include six major collections covering mammals, birds, amphibians, plants, fungi, insects, molluscs and fossils. All told, there are 500 exhibits on display, drawn from a collection of two-million specimens. The museum was intended to bring six research collections into one location.

But for the average visitor, nothing quite compares to staring into the jaws of the largest creature ever to live on Earth.

"The whale tends to get people's attention, but when they come here, they are blown away by all the other stuff, so it's a great hook," says zoology professor Eric Taylor, the museum director.

But Prof. Taylor notes that the skeleton is a distinct piece. Other museums may have such blue-whale skeletons in storage, but none on display like this, he says. "It's certainly the biggest in Canada. It's quite rare."

Prof. Taylor describes the skeleton as fairly simple and elegant.

"If you look at the head, there's really not that many bones in it so it's rather sort of efficient but at the same time so massive."

It's easy to access believe-it-or-not facts about the blue whales. Their hearts are the size of small cars. Arteries in that heart are big enough for human babies to crawl through. Their calls are louder than decibels produced from jets. And so on.

But the skeleton brings the whales from concept to life, says Prof. Taylor.

"Although it's a skeleton, people do very quickly relate it to a living creature. You can see something on TV. Someone can tell you a fact about how many buses you can fit in the mouth of the thing.

"But because you can actually walk underneath the thing and walk the whole length of it, that has a powerful impact on people."

The life of this particular whale ended when it washed up on a Prince Edward Island beach in 1987. Over two days, the remains were buried and forgotten until a little more than a year before the Beaty complex was opened.

When Andrew Trites, a professor in UBC's Fisheries Centre and Director of the Marine Mammal Research Unit, heard stories of the buried whale, he began a search on site in PEI for the remains to secure them as a display for the new museum. The initial plan was to have small skeletons, but the prospect of a blue whale allowed for one massive, dominant piece.

Eighteen months ahead of opening day, the whale's shoulder blade was found, sparking an effort to dig up the full skeleton and ship it to the Pacific coast.

"What's that famous expression? Success is the intersection of preparedness and opportunity – or something like that," says Prof. Taylor. "We were extremely lucky." 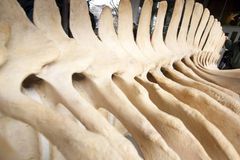