Uber's economy driving service appears to have reduced drinking and driving deaths in California cities where the service is offered, says a new study that comes as many Canadian municipalities are trying to keep the service from expanding in their cities.

The research, conducted by Philadelphia's Temple University business professors Brad Greenwood and Sunil Wattal, will be presented at the Academy of Management conference next week in Vancouver. The study analyzed data from 2009 to 2014 and concluded the UberX service resulted in a decrease in drinking and driving deaths of between 3.6 and 5.6 per cent in the Californian cities where the service is offered.

The researchers speculate the cheaper price of Uber and its easy access, compared to regular cabs, make people more likely to call the service when they have been out drinking. On weekends, there is no difference in deaths. Prof. Greenwood speculates it's because prices for the service are higher then.

The study comes as the City of Vancouver is evaluating whether its "vehicle for hire" bylaw could eventually cover Uber. It was prompted by council to do so last fall after a petition to allow Uber in the city was signed by 27,000 people.

The ride-sharing service has faced pushback from government and cab companies in the six Canadian cities where it operates; Vancouver and Calgary are the only ones to successfully keep the service from starting up in their municipalities.

Carolyn Bauer, who heads the Vancouver Taxi Association that campaigns against Uber on a website called TaxiTruths.ca., said drinking and driving rates dropped by 54 per cent in B.C. from 2010 to 2014 following tougher laws and without Uber.

"[Taxi drivers across Canada] pay their dues here and insurance is not cheap, so is it fair for someone to come and not be on a level playing field?" she said.

Still, some said that the study points to potential benefits of the service.

"Sometimes taking a cab can be expensive and it can take a while, depending on the time of night and if it's busy and you don't know where they are … so basically, if you make it easier and cheaper for people to hire a ride, more people will use it when they need it, right? And that leads to less drinking and driving," said David Hardisty, associate professor of marketing and consumer behaviour at the University of British Columbia's Sauder School of Business.

Prof. Greenwood said the 3.6 per cent finding is a result of comparing quarterly changes in the number of alcohol-related vehicle deaths in cities that have Uber and the rest of the state. The 5.6 per cent estimated drop came from comparing rate statistics in cities that have Uber and similar cities that don't. The study notes that more than 13,000 deaths occur in the U.S. each year due to drunk-driving accidents at a cost of $37-billion (U.S.). If the results of their study hold nation-wide, it would save 500 lives annually, the paper argues.

Until the City of Vancouver releases the results of its bylaw evaluation this fall, "it is unlikely that the City would consider issuing any new licences [under the bylaw that covers all service vehicles, from horse-drawn carriage to taxis and bike couriers]," said an e-mailed statement from spokesman Jag Sandhu.

Montreal and Toronto are also re-evaluating their bylaws, but Uber continues to operate there in the meantime. Toronto's application for a court injunction that would ban the service was thrown out by a judge. A transport spokeswoman for the city, Tammy Robbinson, said the city was not aware of the Temple University study and would consider it in Toronto's assessment of Uber's safety and legality.

The benefits found by the study could wear off over time, however, said Simon Fraser University business professor Mark Wexler. That's because the differences between Uber and existing cab services would shrink as the service becomes increasingly regulated.

"Any time that you flood the market with a new idea, it's just a matter of time until the old problem presents itself," he said. 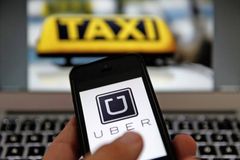