British Columbia is edging closer to witnessing the launch of the liquefied natural gas industry, but the government will be patient before counting on LNG revenue, the province's Finance Minister says.

"Though we have seen important and substantive progress in the development of an LNG industry in B.C., we have not included LNG projects in our revenue projections at this time, pending the announcement of a final investment decision," Mike de Jong said during Tuesday's budget speech.

Low LNG prices in Asia and a looming glut of supplies have rendered most of the 20 B.C. LNG proposals uneconomic. The two leading proposals, Pacific NorthWest LNG and LNG Canada, aren't in a position to start exporting the fuel until 2020 or 2021 at the earliest.

The creation of a B.C. Prosperity Fund is slated to be financed with $100-million from a surplus that is forecast for the 2015-16 fiscal year. "Future government surpluses, which will include LNG revenues, will help grow the fund over time," according to budget documents.

Originally, the B.C. Liberal government sought to generate LNG revenue first before earmarking money for a long-term legacy – dubbed a fantasy fund by the Opposition NDP.

For now, there is uncertainty about whether even one LNG project might be constructed in the province.

"Three years ago, there was a lot of LNG exuberance and projects were on the bubble of being viable. Now, the economics are clearly worse," said Matt Horne, B.C. associate director at the Pembina Institute, a clean-energy think tank.

Budget documents outline the steps that the province has taken to lure LNG projects, including introducing the framework last year for project development agreements.

"Where you have depressed energy prices, you have a very competitive environment globally for LNG," said Iain Black, president of the Vancouver Board of Trade. "If there are going to be some significant decisions by any of the major players, Canada and in particular British Columbia have laid the necessary groundwork to make us as attractive as possible."

As oil and gas companies watch their finances weaken, that in turn is forcing them to vastly scale back capital spending.

In early February, Royal Dutch Shell PLC said a final investment decision on the LNG Canada joint venture in Northern British Columbia is being delayed by about nine months.

Mr. de Jong said the Liberal government remains confident, despite some setbacks in the industry. "We may continue to say with confidence that the advent of this generational opportunity, and all of the benefits that go with it, is not a question of if but when," he said.

A chart in budget documents cited a Wood Mackenzie study that forecasts global LNG demand will double from 2014 to 2030. "With its close proximity to Asia, LNG facilities in British Columbia would be well-positioned to help meet this growing demand," the province said in a two-page LNG budget update.

Some aboriginal groups have raised environmental concerns about LNG exports to Asia, but the province said it and LNG proponents have negotiated more than 105 agreements with First Nations. "The province is continuing its consultations with First Nations, local and federal governments as each of them have an important role in the province's LNG future," the update said.

Pacific NorthWest LNG, led by Malaysia's state-owned Petronas, is awaiting a regulatory decision by the end of March from the Canadian Environmental Assessment Agency.

B.C. budget to include ‘prosperity fund’ without LNG income
February 15, 2016 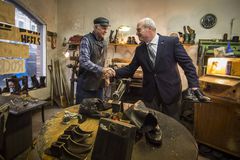