On Haida Gwaii this September, students from universities across the country will begin a semester in Reconciliation Studies. The course, offered by the Haida Gwaii Higher Education Society (HGHES) and accredited by the University of British Columbia, is the first of its kind in Canada. It is offered to students studying in any discipline.

"We get a little bit of everyone, and ultimately, I think we see them as becoming the next decision makers in whatever field they may be in," HGHES operations manager Emily-Sky Collins said. "For them to have a different and more broad perspective on some of these things is ultimately serving a bigger purpose."

The HGHES has a mission statement: shaping the future by sharing Haida Gwaii with the world. It has been offering courses in natural-resource science and studies since 2010; there are more than 230 alumni – a handful of them have remained on Haida Gwaii (formerly the Queen Charlotte Islands). Reconciliation was always weaved into the program, but it came up repeatedly and the organization felt it needed a semester that puts the issue at the forefront.

"We discovered through talking with our students and some of our faculty that [themes around reconciliation] could really be unpacked and we realized that it could be unpacked into an entire semester," said Ms. Collins, who was a graduate of the first Haida Gwaii semester in 2010.

As the Truth and Reconciliation Commission hearings came to a close in 2015, the HGHES brought together some 30 people including First Nations scholars and academic, industry and government officials to discuss what form a semester in reconciliation studies might take. The curriculum was co-developed by Indigenous (many Haida, but not exclusively) and non-Indigenous contributors. The courses are also co-taught by academics and community educators.

"That community connection is definitely the highlight for all of the students," Ms. Collins said.

"I would say that's what makes us who we are," added Carlos Ormond, executive director of the HGHES. "It's dramatic, but we wouldn't be who we are if it wasn't for the community."

"I think that it's just an important thing to learn. … It's a huge part of Canada that gets overlooked a lot and especially in our history," said Emma Eslake, 20, an anthropology student at the University of Victoria who is not Indigenous and hopes to go into journalism. "I think especially were I to be writing about Canadians and Canada … if I were to go into journalism, that's a really important thing to take into consideration – how the Indigenous groups have been treated and what they're looking for now."

While the HGHES is based in Skidegate, B.C., this course will be taught further north in Masset and Old Massett, with students living in various set-ups. Ms. Eslake, who is originally from Pemberton, B.C., will be staying in a hostel. Other living options available to students include renting a house or cabin together or living in a homestay.

"It puts them in the community instead of in a dorm, so that's a big piece of their experience, too," said Ms. Collins, who is not Indigenous but grew up on Haida Gwaii, moved away and later returned.

Dr. Ormond, who is not Indigenous either, says the courses inject about $200,000 into the community every semester.

"In a sleepy, little, sort of resource-dependent community, that has impact," Ms. Collins said.

Further, it exposes high-school students on Haida Gwaii to university students, allowing for interaction that wouldn't happen otherwise as there are no universities on the islands.

Reconciliation Studies, initially a one-semester course, will be offered again in September, 2018, possibly expanded into two semesters – and possibly with a different name.

"Currently, [reconciliation] is the best term to use right now for what we're imagining for this program," Dr. Ormond said. "But as a community – as a local community as well as the instructing community and the student community, if over … the inaugural semester, we all realize that there might be a better term for what it is that we're doing, then we're open to that."

Ms. Eslake – who learned about the course from her older sister, who took the natural-resources semester – moved to Haida Gwaii at the end of August.

She's excited to have the experience "in my knowledge bank, just having more information and being more aware of certain issues," she says. "There's a lot that I know that I have to learn."

For Haida, this wooden chest represents the promise of a reunion with cultural treasures
November 12, 2017 On B.C.’s Haida Gwaii, history is being made with a film in a language very few people can speak
November 12, 2017 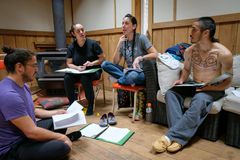 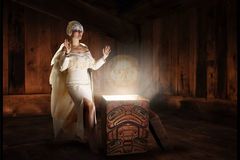