British Columbia's decision to only allow local wines on grocery store shelves has rankled the United States, which is launching an international trade complaint over the policy.

A year ago, representatives of Argentina, Australia, Chile, Mexico, New Zealand, the United States and the European Union sent an open letter to Premier Christy Clark questioning whether her government's move to force B.C. supermarkets to sell wine from other provinces or abroad in designated areas with separate cashiers violated Canada's commitments to the World Trade Organization.

Now, the United States has filed a challenge with the international trade body asking British Columbia to amend the relevant regulations in order to ensure that the sale of wine in grocery stores is permitted on a non-discriminatory basis.

"Canada and all Canadian provinces must play by the rules," Mr. Froman said in a news release from the executive office of outgoing U.S. President Barack Obama.

"When U.S. wine producers have a fair shot at competing on a level playing field, they can compete and win in markets around the globe."

The United States has sent a letter to the Canadian government asking for consultations as a first step toward resolving the dispute. If that fails, the United States may request the WTO establish a dispute-settlement panel, where, the Obama administration has won every one of 26 complaints it has brought that have been settled, according to the press release.

The B.C. government said it is confident the province is complying with international trade obligations "Trade agreements such as [the North American free-trade agreement] allow for a number of private wine outlets that sell only B.C. wine and we are confident in the approach we have taken," Shirley Bond, the minister of jobs, tourism and skills training, said in a news release.

British Columbia amended legislation in April, 2015, to allow wine sales in grocery stories and held an auction for licences about a year later.

To date, 14 stores from the Loblaws and Save-On-Foods chains have received licences to sell wine. None operate in Vancouver – where city council is reviewing the provincial rules – and the majority are located in Surrey or the Okanagan region. The government has said it will cap the eventual number of these licences at 60.

All 14 supermarkets are selling only B.C. wines on their shelves and none have opted for the more costly option of creating a separate area for local and imported wines.

"This is entirely consistent with how the whole [reform] program was rolled out: They hold the photo op first and then they ask the questions afterward about how they can fix the mess their policy created," Mr. Eby said.

He added that a B.C. loss would hit its small- and medium-size local wineries hard because they will have to compete at supermarkets with much cheaper import brands. Plus, these smaller producers no longer have many specialty private stores allowed to sell just B.C. wines because many of these shops transferred their liquor licences to the grocery stores, Mr. Eby said.

Canadian trade expert Peter Clark said the American complaint is serious and it is "definitely worth fighting" for Canada. He said Canada has several counter-arguments to the U.S. complaint, including that many small wine producers in the United States are granted subsidies to stay in business. Those subsidies can make up to 90 per cent of their volume sales.

But Mr. Clark said he's concerned the U.S. action could result in widespread changes to Canadian wine sales and distribution. The action could also see international wines, and not just wines from California, end up in Canadian grocery stores. 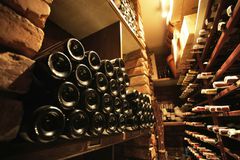