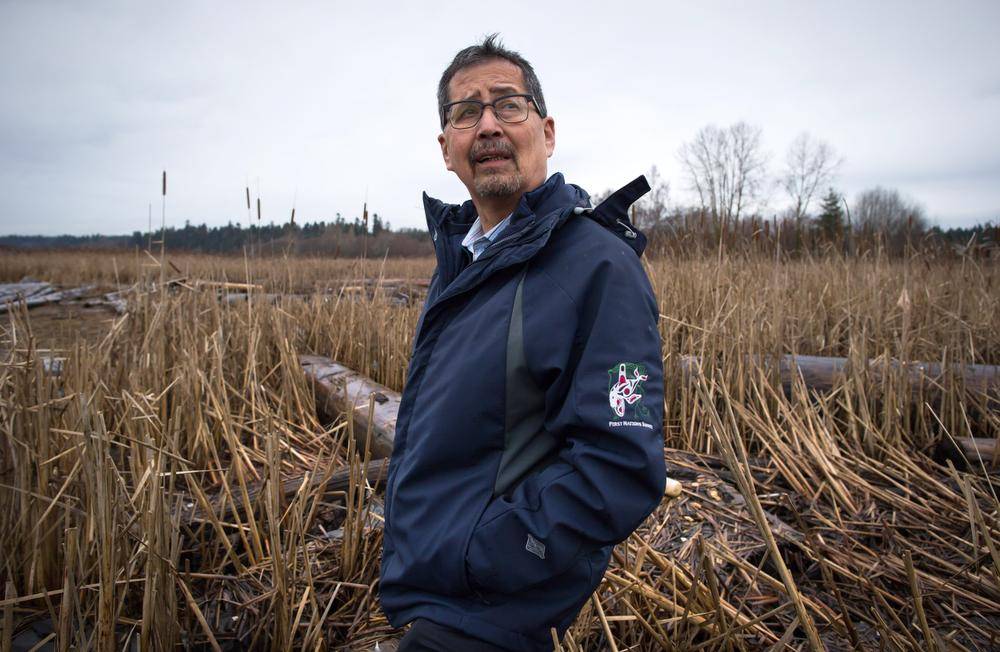 Musqueam First Nation councillor Howard Grant along the banks of the north arm of the Fraser River in Vancouver. (Darryl Dyck for The Globe and Mail)

When guests visit the Museum of Vancouver’s newest exhibit beginning next week, the first thing they will see is a nail protruding from the wall beside its entrance. A Musqueam tradition advises visitors to someone’s home to “hang” any preconceived thoughts on a nail like this so people enter the space with an open mind and an open heart.

That’s what museum-goers will be asked to do as they enter the exhibit that tells the story of c̓əsnaʔəm, one of the largest ancient Musqueam villages and burial sites upon which Vancouver was built. One of the exhibit’s aims is to encourage guests to revisit assumptions that Vancouver is a new city of immigrants and offer instead a view of a city built from and alongside a vibrant Musqueam community that still exists.

The Musqueam are one of the original inhabitants of what is now Vancouver. One of their band councillors, Howard Grant, recalls learning about Vancouver’s history as a young boy during visits to the original City Museum, located on the top floor of the Carnegie Centre. Along with his older sister, he would spend hours scouring the collection of West Coast aboriginal items.

Given the unusual spelling and punctuation in the name of the place, curators offer a guide on how to pronounce c̓əsnaʔəm.

“The first letter /c̓/ sounds very much like the underlined letters in the word nuts. Note also the apostrope, which causes /c̓/ to have a slight popping sound.

“The first syllable /c̓əs/ rhymes with the underlined syllable in ‘resuscitate’ – remember the description of ‘c̓’above.

“The second and third syllables ‘naʔ’ and ‘əm’ can quite correctly be pronounced as one syllable with one long vowel in the middle and which rhymes perfectly with ‘Naam’, the slang pronunciation of Vietnam.”

“I always saw [the museum] as a dead place. It felt like I was looking at something that was long gone, no longer existing, a tribe forgotten,” reflects the 68-year-old, who served on the advisory group for the new exhibition. “But we were thriving, we were living, we were still there.”

The exhibition opens in three parts next week, at the Museum of Vancouver, the Museum of Anthropology and the Musqueam Cultural Centre, and in part it chronicles how that idea – that Vancouver’s aboriginal people were of the past rather than the present – came to be.

The locations will explore different aspects of the ancient village of c̓əsnaʔəm, founded about 5,000 years ago atwhat was then the mouth of the Fraser River and is today in the Marpole area. Mr. Grant recalls stories passed through generations of salmon runs so large that villagers could “walk on water” and of such plentiful natural vegetation that farming was unnecessary. But as the river delta moved west, so did the people, leaving behind vast fields of artifacts and ancestral remains.

Beginning in the late 19th century, archeologists, collectors, and treasure hunters began mining those fields at the same time as the growing new city expanded toward the river. The American Museum of Natural History undertook an extensive dig and brought a number of objects and ancestral remains to its museum in New York City. But the majority of artifacts were collected in the 1920s and ’30s, led by the local historical association, the precursor to the Museum of Vancouver.

Historian Susan Roy has researched the archeological work done during that time, and how the site and its original inhabitants were interpreted and portrayed to the public. She found theories suggesting those inhabitants were of a different race from the Musqueam, ideas derived in part by analyzing skulls.

“A lot of those kinds of pseudo-scientific ideas at that time really worked to disassociate the Musqueam from that place,” she said.

Ms. Roy, who is also a co-curator of the Museum of Vancouver’s exhibit, said part of the current undertaking involves addressing some of the museum’s earlier practices, including the indiscriminate display of artifacts and ancestral remains.

“I felt like I was the tourist coming to the museum and learning from the knowledge experts. It was amazing. I will live with the experience for the rest of my career.”
Viviane Gosselin, museum curator

Just days before the exhibition opens, workers are delicately attaching artifacts – which are being called “belongings” in acknowledgment of their former possessors – to mounts. A new coat of red ochre paint, which represents Mother Earth in Musqueam culture, and the fresh smell of cedar woodwork bring to life a room that has sat empty for several years.

Until now, visitors to the museum began their journey through the history of Vancouver with a permanent exhibit highlighting the city’s “golden years,” when settlers arrived in droves in the early 20th century. Viviane Gosselin, a curator at the museum, says museum staff had known for quite some time that the vacant room needed to extend that history.

“This is a big statement,” she said. “As people come in and get acquainted with the history of Vancouver, we wanted the first segment to be about aboriginal groups of Vancouver.” 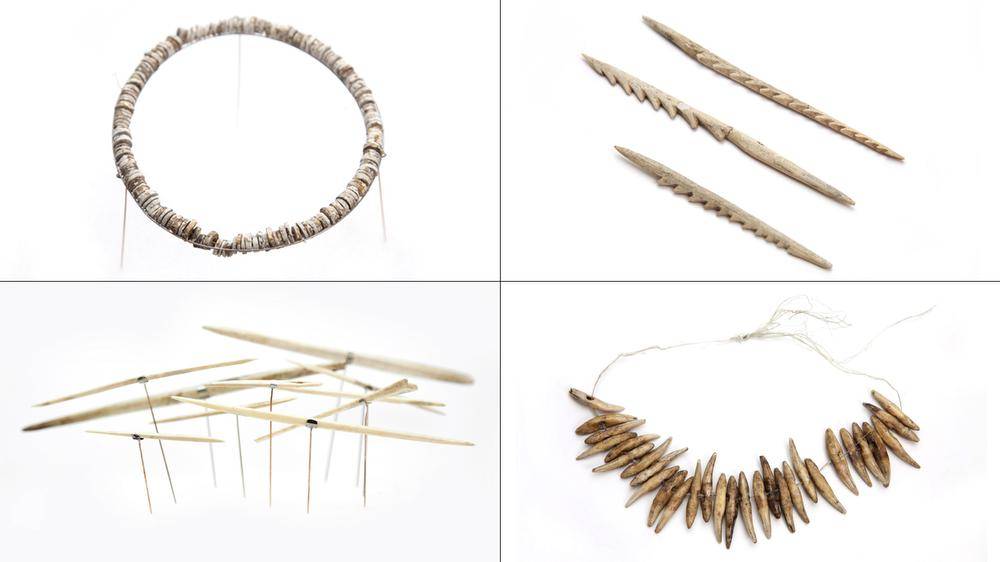 Clockwise from top left: Shell beads would have signified wealth, barbed harpoon tips made from antlers, a necklace made from canine teeth and needles likely used to make nets from plant fibres. (Courtesy Museum of Vancouver)

An exhibit about c̓əsnaʔəm was a perfect fit, given the large collection of artifacts from the ancient village – some 1,500 – in the museum’s vaults. A 2012 Musqueam vigil aimed at protecting part of the site in the face of a looming condominium development served to invigorate the exhibition’s organizers.

A group of elders was assembled and was involved in all areas of the project, from determining which artifacts to display to writing the placards that will accompany them.

Ms. Gosselin, who has worked in museums for over 15 years, said it was the most collaborative project she’s ever been a part of, with community members continuing to provide input even in the final days before the opening. “I felt like I was the tourist coming to the museum and learning from the knowledge experts,” she said. “It was amazing. I will live with the experience for the rest of my career.”

Also important to Ms. Gosselin was the groundbreaking collaboration between the three organizations that will host the exhibition. She noted that museums often work together on staging projects, but rarely in the same city. For this exhibition, each site will present the story of the ancient village of c̓əsnaʔəm in a unique way.

“Think of it like a choir. You have these three organizations that are talking about Musqueam society and c̓əsnaʔəm at the same time,” said Ms. Gosselin. “I think it will make a huge statement and Vancouverites will be better informed because of it.”

As the city rapidly grows and new towers and homes are erected, the fight to preserve what’s underground at the site of c̓əsnaʔəm has never been more important, Mr. Grant said. 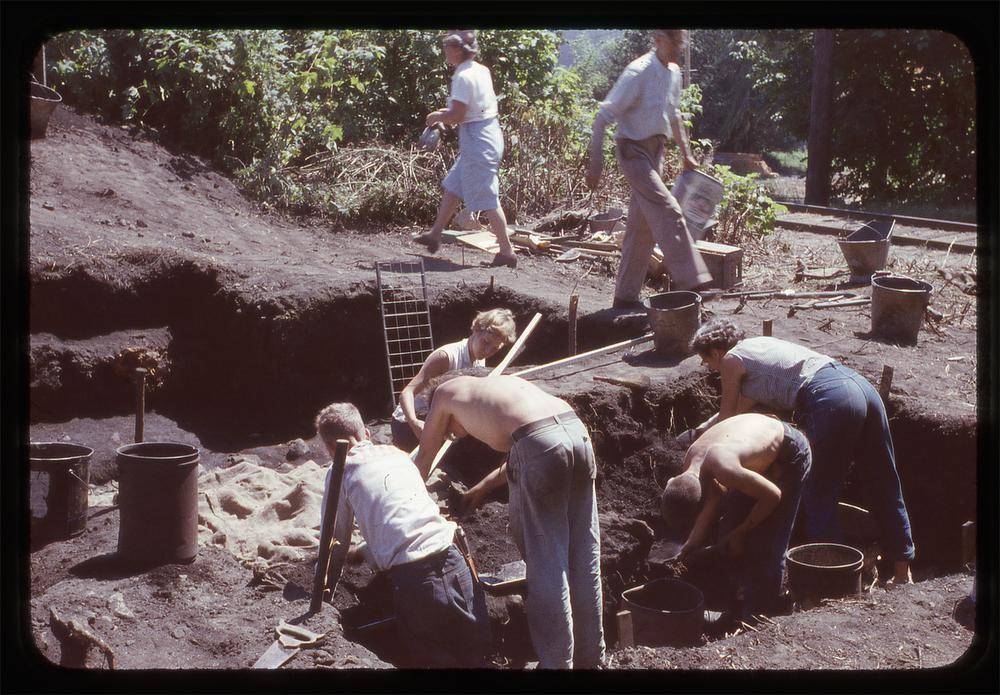 During the 1950s, Charles Borden of the University of British Columbia organized a series of archeological digs at c̓əsnaʔəm, also known as the Marpole midden, when the site was threatened by urban development. ( Courtesy the UBC Laboratory of Archaeology and the Musqueam Indian Band)

c̓əsnaʔəm, the city before the city

He laments that visitors arriving in Vancouver from the airport often drive right through the ancient village without ever noticing. The only marker is a lone cairn in a small park, indicating the “Marpole Midden,” as it was called when it became a national historical site in 1933.

The Musqueam band has been fighting to preserve what is left, and Mr. Grant would like to see an interpretive centre that would welcome visitors to the site of c̓əsnaʔəm. But equally important is preserving the space for future generations of Musqueam, he says, who must have a place to understand who they are and where they came from.

“Without that, they will indeed become what I hated when I went to the museum as a boy: a dead society, gone and forgotten,” he says.

“It’s my responsibility to try to ensure that day will never come.”