A lawyer representing a filmmaker who produced a documentary about the Vancouver Aquarium's captivity of beluga whales and dolphins says the aquarium is trying to have the film removed from the Internet.

But counsel for the aquarium says its aim is not to keep the filmmaker from expressing himself.

The two sides were in B.C. Supreme Court Wednesday as the aquarium sought an injunction against Gary Charbonneau's documentary, Vancouver Aquarium Uncovered.

But the filmmaker denied violating copyright, and said the material could fairly be used for the purpose of research and education.

The aquarium did not file a claim for defamation.

On Wednesday, Daniel Burnett, the lawyer representing the aquarium, said its aim is not to silence Mr. Charbonneau.

The aquarium's notice of application had called for an order requiring the video to be removed from the Internet. But Mr. Burnett said at the hearing that Mr. Charbonneau could simply edit out the material in question.

"The defendant has at all times had the option of continuing with his message, however it may be, without having to illegally use the aquarium's material to do so," he said. "… He doesn't want to."

Arden Beddoes, Mr. Charbonneau's lawyer, told the court that "the aquarium's true motive on this application is to silence this documentary."

He said the aquarium only launched its lawsuit after being told by the website Vimeo, which had posted the documentary, that it could not be removed unless a court action was filed. The film remains available on YouTube, as well as a website set up by Mr. Charbonneau.

Mr. Beddoes denied the film was created for commercial purposes, arguing Mr. Charbonneau did not develop it to make money and was out of pocket.

The aquarium has noted that people who attended a screening of the film at the Vancouver Public Library last September were charged $10 and that Mr. Charbonneau raised more than $12,500 through the film.

Mr. Beddoes also challenged whether the aquarium holds the copyright on some of the material, such as photographs, it has flagged.

The aquarium's notice of civil claim says Mr. Charbonneau and Evotion "have each been guilty of reprehensible, insulting, high-handed, spiteful, malicious and oppressive conduct, and such conduct by the defendants justifies the court in imposing a substantial penalty of exemplary damages on the defendants, imposing an award of aggravated damages."

The aquarium, in its application, said it "will suffer irreparable harm if the defendants are permitted to continue to use the copyrighted works."

"The aquarium has expended significant resources, including time and expense, designing, creating and maintaining its copyrighted works, including promotional, marketing and educational materials, which includes the contents of the aquarium website," the application says.

The aquarium said there would be "no inconvenience to the defendants if an injunction is granted while the issues are determined between the parties."

Mr. Charbonneau's statement of defence says he had an agreement with the aquarium on when he could shoot video at the facility, but the aquarium breached it by refusing to allow him to film the belugas and dolphins. He said it also failed to provide him with enough interview time. 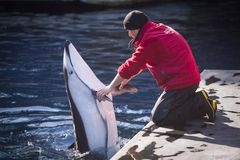 Hana the dolphin dies at Vancouver Aquarium despite groundbreaking surgery
May 25, 2015 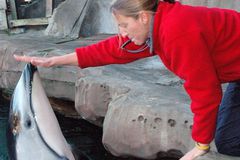