The Dr. Peter Centre in Vancouver has applied for an exemption to federal drug laws that would allow the facility to continue offering supervised injection services to its clients.

Nurses at the centre, which provides care to people living with HIV, including many who are poor and homeless, have been quietly providing supervised injection services since 2002 without a formal exemption to Canada's Controlled Drugs and Substances Act.

The Dr. Peter Centre started the service after the College of Registered Nurses of British Columbia said that it was within the scope of nursing practice to supervise injections for the purposes of preventing illness and promoting health.

But a groundbreaking 2011 Supreme Court of Canada decision related to Insite, a high-profile clinic in Vancouver's Downtown Eastside, has cleared the way for the Dr. Peter Centre to formalize the practice – with full backing from provincial and city governments.

The application was submitted by the Dr. Peter Aids Foundation and Vancouver Coastal Health, the regional health authority that funds and oversees the centre.

"The Dr. Peter Centre provides a variety of effective care and treatment services for those living with HIV/AIDS including access to supervised injections," B.C. Minister of Health Terry Lake said Thursday in a statement about the application.

"Our government is committed to providing the best evidence-based support and care for British Columbians with substance use problems and addictions, and we support Vancouver Coastal Health and the Dr. Peter Centre in their application."

Vancouver Mayor Gregor Robertson also endorsed the application, saying in a statement that supervised-injection services at Dr. Peter Centre and Insite "have become an indispensable public health resource in our community."

The Dr. Peter Centre is seeking an exemption similar to one obtained by Insite, whose supporters went to court to maintain an exemption that was first granted in 2003 for a three-year term.

Throughout that court battle, which lasted years and wound up in the Supreme Court of Canada, the federal government fought against maintaining the exemption for Insite on grounds that included health care falling under federal jurisdiction.

In 2011, however, the Supreme Court of Canada ordered the federal government to grant the exemption and allow Insite to keep operating, saying that to do otherwise would infringe on clients' rights under the Charter of Rights and Freedoms.

The Supreme Court found that Insite provided health benefits with no discernible harm to the community.

"The effect of denying the services of Insite to the population it serves and the correlative increase in the risk of death and disease to injection drug users is grossly disproportionate to any benefit that Canada might derive from presenting a uniform stance on the possession of narcotics," the ruling said.

The decision, which was heralded by supporters of the "harm-reduction" approach to drug addiction, was widely seen as opening the door to other legally-sanctioned, supervised injection sites in Canada.

The two machines, which have been operating for about six month and are located in a drug users' clinic and a single-room-occupancy hotel, provide sterile crack pipes for a quarter. The machines – which complement free crack pipes distributed by Vancouver Coastal Health – are an attempt to steer users away from makeshift pipes, which can splinter and increase the risk of diseases including HIV.

Portland Hotel Society, which is one of the key players behind Insite, is also behind the crack pipe vending machines.

In a statement, Mr. Blaney said the federal government supports " treatment that ends drug use, including limiting access to drug paraphernalia by young people."

Supporters of the harm-reduction approach say such programs can help connect users to other health services while reducing the risk of overdose deaths and the spread of disease.

Up to 63 per cent of the Dr. Peter Centre's supervised-injection clients have received addiction counselling and about 30 per cent have been referred to withdrawal management or other long-term programs, the centre says.

The centre did not say when it expects a decision on its application. 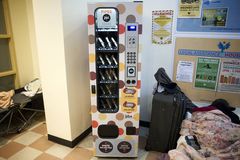 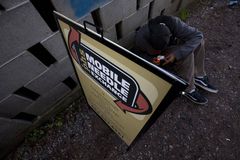 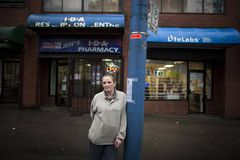 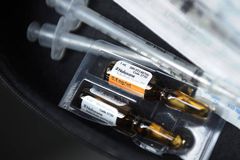 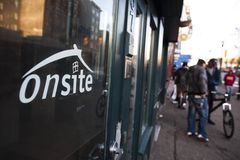