The lot near the corner of Keefer and Quebec streets is no historic gem. Once the site of a garage, it is now covered with gravel and a smattering of parked cars.

But it has turned into a Waterloo for Vancouver's Chinatown, with a wide range of groups viewing whatever is built there as the indicator species for the future of this small historic neighbourhood.

At the heart of the debate are these questions: Are some buildings just too big for Chinatown? And what will do more to improve this beleaguered area, which has been losing businesses and vitality since the 1970s – more social housing for the poor or more market condos to attract the middle class?

Those larger issues have transformed what seemed like a simple development project for one of the region's most successful businessmen, Ryan Beedie, into a tangle of community opposition, behind-the-scenes skirmishes among different interests and a series of rejections at various levels of the approval process.

The latest obstacle occurred when the design for the 13-storey, 144-unit tower was rejected last month by the city's urban-design panel, the second time it's been turned down.

The Beedie project's design included 25 units of social housing, which BC Housing has promised to run and rent at the lowest possible rates to Chinese seniors. There would also be a community meeting room for Chinese cultural groups and architectural touches aimed at helping the building fit into the area.

But the design panel rejected it by a vote of 6-4, saying the project failed to capture the spirit of Chinatown or provide a contemporary take on Chinese architecture. The panel also said the building – designed by Merrick Architecture – was too bulky in the middle of a historic area characterized by narrow buildings and modest heights.

"This is a pivotal, key site in Chinatown," the panel's chair, architect Roger Hughes, said. "This is a better design [than the last submission], but I think we've got to get this one right. We have to preserve the important cultural heritage of this place."

A sign of the tension over the building is the fight that went on backstage about a letter that architect Bing Thom sent to one panel member days before the meeting. The letter was then distributed to the other members. Mr. Thom opposed the latest design, saying that "preservation of Chinatown's heritage and cultural character will be completely sacrificed on this important site by this development proposal."

Mr. Hughes said that kind of private lobbying, which members of the design panel are prohibited from considering, made some people in the group "a little bit upset."

Mr. Thom said later it might have been better to issue an open letter, rather than a private one, but he was pressed for time. And, he said, "the issue is bigger than the property."

When the plans for 105 Keefer St. were first proposed five years ago, there were few signs it would become so controversial. It was just one of several projects proposed under new zoning the city had approved for a select number of sites away from Chinatown's most historic street, Pender.

But in the meantime, two other large condo projects went up on Main Street, and a group of young people, who had roots in Chinatown through their parents and grandparents, became active.

Many others weighed in, including Carol Lee, daughter of one of the city's first prominent Chinese businessmen, Bob Lee; university professors; architect Joe Wai; and a group of ex-planners and ex-politicians – Mike Harcourt among them – who have been active for years in trying to improve life in the Downtown Eastside.

They all bemoaned either the generic look of the Main Street condos or the lack of community benefits they provided, or both. And they mobilized to ensure the same didn't happen with the Beedie project, estimated by the B.C. government to cost $22-million in December, 2014.

What will happen now isn't clear. For some, the problem is just the design and bulk of the building. But community activists simply want dramatically more subsidized housing.

"It's not correct to build expensive condos there," said 73-year-old Godfrey Tang, who lives in the area and has joined the opposition organized by young activists. They also say the project is contributing to the area's gentrification, which is forcing out long-time existing businesses that serve low-income residents.

That's pretty much the polar opposite of how various business groups and even architect James Cheng, who is on the design panel, view the project. Although Mr. Cheng voted against the current proposal because of its unsatisfying design and bulk, he said the community needs this kind of condo project.

"Part of the blight in Chinatown today is because we used to dump all the social housing there. But people there don't spend a lot of money and the merchants die," he said.

Mr. Cheng said the area needs people such as his wife's parents, who now live in a single-family house near 41st Avenue and Victoria Drive – a neighbourhood with the highest concentration of Chinese residents in the city – and would like to downsize and move back to Chinatown.

"But they can't find anything," he said.

Beedie Development Group vice-president Houtan Rafii said for now, the company is not giving up and is considering its next move. "We're regrouping and collectively discussing the options." 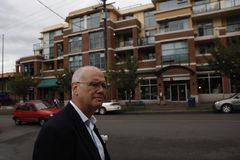 Vancouver’s skyline to rise amid an office-tower building boom
March 28, 2016 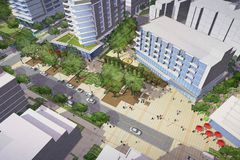