Vancouver has adopted a new policy to support transgender residents that includes the introduction of gender-neutral bathrooms, sensitivity training for staff and a new team in charge of overseeing the changes.

City council voted unanimously on Wednesday to adopt a series of recommendations contained in a report prepared by a pair of consulting groups that specialize in transgender issues, TransFocus Consulting and Equity Labs. The new policy comes a year after Mayor Gregor Robertson called for transgender residents to have equal rights under Canadian law and to have safe access to city space and events.

The city's policy expands similar measures already in place at the Vancouver Board of Parks and Recreation and the Vancouver School Board, both which have taken steps to adjust their programming and venues to be more inclusive for the city's trans community.

"Our purpose was to take what was at the Vancouver Park Board – which is very specific to recreation – and translate it to the city," said Kai Scott of TransFocus Consulting, who worked on a report presented to city council outlining the recommendations included in the new plan.

Mr. Scott said the policy aims to make sure that the transgender community is considered in the many sectors under the city's jurisdiction, such as municipal services, housing, grants, neighbourhood and transportation planning and facilities management. "To make sure that whatever plans made going forward cover the very unique needs of trans and gender-variant people," he said.

The city will begin with five "quick start" recommendations that will be put in place over the next year and a half. These include revising grant priorities to consider the transgender community and updating city event protocols, and then allocating staff to figure out next steps and outline a budget.

In the long term, the report says, the city should ensure that data collection and city communications take the trans community into account, while also leveraging its influence over entities it does not own or operate.

Mr. Scott said that while initially the city will focus on changes that can be implemented quickly and at a low cost, deeper change will come only if the report's recommendations are heeded over time.

Park board chair Sarah Kirby-Yung said she is happy the city is addressing this issue, and that working and listening to the transgender community will be crucial.

A 2014 report presented to the park board made 77 recommendations to make its services and facilities more accessible and inclusive for transgender people, and the board has since began acting on these suggestions. The city's new policy draws on that report.

Ms. Kirby-Yung said the city needs to take its time and pace itself as it moves forward. "It takes a little while to effect changes across systems, processes, facilities and things of that nature," she said. "So I think you want to maintain the momentum but you also have to temper that with some realism – that sometimes things are going to take a little time because you want to take the time get them right."

Brenna Bezanson, a community liaison officer at PACE Society in Vancouver, an organization that supports the safety and rights of sex workers in the city, said transgender people are overrepresented in marginalized groups.

"Breaking down that marginalization through visibility, through eduction and cultural competency, will go along way in not only reducing the barriers that trans folks face, but in also changing some of of the damaging effects that marginalization has created," Ms. Bezanson said.

She said she hopes that the report and plan can set a precedent for other cities around the country, maybe even around the world.

Ms. Bezanson, who was consulted as a representative of PACE but also as someone who is transgender and a former sex worker, praised the report's authors for reaching out to people who understand the issues from a first-hand perspective – something she hopes to see more of in the city.

Originally from Nova Scotia, Ms. Bezanson has lived in Vancouver for the past six years. "I can say that I moved here because I felt safer here. And that's not to say that Vancouver is perfect, but on a daily basis I see the efforts being made here, whereas I haven't seen that in other places I've lived, at least not in the scale they are happening here." 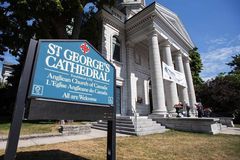