Bobbi O'Shea's voice rose as she accused a defence lawyer of lying on Tuesday, denying his claims that jail guards were forced to restrain her because she spat on a camera and kicked a cell door.

The 44-year-old First Nations woman is suing the City of Vancouver and four police officers for allegedly binding her feet with a strap and yanking it hard under a cell door for an hour, causing her excruciating pain.

Iain Dixon, lawyer for the city and police, said officers' notes show she was restrained after she obscured security cameras.

"Those are lies," O'Shea said in B.C. provincial court. "I was being tortured and no one helped me."

O'Shea is seeking $25,000 in damages for alleged physical injuries and emotional trauma caused during the March 2008 incident. She alleges she suffered a panic attack after smoking a $5 hit of crack cocaine and was taken to a Vancouver jail, where she was placed in a restraining device.

Her lawyer, Doug King of Pivot Legal Society, entered the device as an exhibit. Called a modified restraint system or "hobble," it's a black nylon strap that can be tightened around the ankles and tethered to an object.

Sgt. Matt Clarke, who was overseeing the jail that day, testified that O'Shea was placed in the device because she posed a danger to herself. He alleged that spit smeared on a camera meant guards couldn't see her to monitor her breathing.

"You're faced with the decision of not monitoring her well-being or taking steps to ensure you have the ability to monitor her well-being."

He said he had been in the device himself and described it as "horrible" and "intensely unpleasant." But he stopped short of calling it painful, instead insisting it was uncomfortable and one's feet could fall asleep.

O'Shea had earlier testified it was the worst pain she had felt in her life.

"I felt like they were all tugging on it, trying to rip my feet off my legs," she said through tears. "I didn't know if I was going to make it out of there."

She said guards placed her in the device after she covered up a glass cell window with toilet paper, and after she moved her cuffed hands in front of her body twice to wipe her nose.

O'Shea said she covered up the window because a male guard was constantly checking on her and she needed to use the toilet. But Clarke testified that observation logs show she was only checked every 15 minutes.

He said several cells in Vancouver Jail had video cameras at the time, but the footage is only saved if someone reports an incident relatively soon afterward.

O'Shea testified she filed a police board complaint a year later because she struggled with homelessness and addiction following the alleged incident. Her complaint was dismissed and she filed her lawsuit in 2010.

The trial is expected to continue through Thursday. 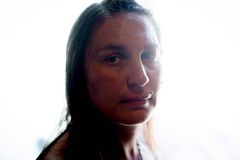 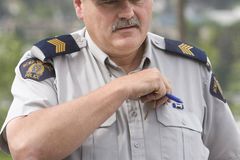