The city of Vancouver may revamp its approval process for public art as a result of complaints about a light installation in a high-end residential neighbourhood.

"One of the things we are looking at as we move forward, is when you have a piece of this type – and this is the first piece we've had of this significance – are there enhanced or augmented techniques we need to do to engage neighbours?" said director of planning Brent Toderian.

But while opening the door to more detailed consultation, Mr. Toderian appeared to slam it on the possibility that the city might order the installation – at West Pender Place, a new residential complex at 1499 West Pender St. – turned off or removed, saying it was approved according to the city's existing guidelines and that steps have already been taken to address residents' concerns.

"The art piece plays a role both artistically and architecturally and we think it would be over-steering to turn it off," Mr. Toderian said on Friday. "But we think there is ample opportunity to improve its performance, improve its neighborliness, while still keeping the integrity of the artist's original vision."

As an interim measure, the city and the building's owner have agreed to have the lights – low-energy LEDs designed to run 24 hours a day – turn on at dusk and go off at 10 p.m.

That measure doesn't satisfy some nearby residents, who say the manual turnoff is sometimes late and that the installation has disrupted their sleep and living routines.

"There's a big difference between walking by and admiring pretty lights and living with them 24 hours a day in your living room," said Giuseppe Cuzzetto, whose fifth-floor, north-facing apartment in the Palais Georgia faces the installation.

Mr. Cuzzetto, who serves on the strata council for his building, said the council has been swamped with light-related complaints.

Don Sihota, who lives in a nearby building on Broughton Street – also in a north-facing unit – has been soliciting feedback from area residents and lobbying city hall in the hopes that the installation would be removed.

"I love the place and I love the view and this intrusive light show basically destroys the view," said Mr. Sihota, who maintains the city didn't adequately consult residents or fully consider the impact the light installation would have.

The installation, designed by Dutch artist Tamar Frank, was turned on July 13 and is installed on two buildings, a 36-storey west tower and a 10-storey east tower. The $400,000 project was commissioned by building developer Reliance Properties and is designed to change colours at preset intervals, representing the changing light of days and seasons.

The installation addresses concern about a "blank wall condition" that came up during the review process for the building and also meets the city's public art requirement, Mr. Toderian said.

Fans of the installation see it as an antidote to Vancouver's often-dreary skies and a throwback to the city's days as a neon capital.

Others see the glow as anything but welcoming.

"Whenever it gets dark outside, you kind of fear the darkness, because you know these lights are going to come on and invade your home," Mr. Cuzzetto said. "There's lots of public art around the city I don't like, but I don't complain about it because I can walk away from it – I don't have it staring into my suite." 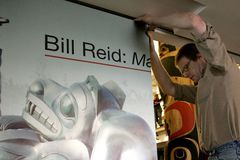 Royal BC Museum teams up with condo king to create Vancouver satellite
September 15, 2011 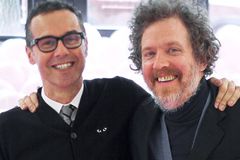 Children's book too hot for U.S. publishers warmly received in Canada
September 13, 2011
Follow Wendy Stueck on Twitter @wendy_stueck
Report an error Editorial code of conduct
Due to technical reasons, we have temporarily removed commenting from our articles. We hope to have this fixed soon. Thank you for your patience. If you are looking to give feedback on our new site, please send it along to feedback@globeandmail.com. If you want to write a letter to the editor, please forward to letters@globeandmail.com.
Comments