We haven't heard much about art or artists in this election campaign. Yet one of the most important things to happen to this city over the next term – equally as significant if it doesn't happen – is breaking ground on a new Vancouver Art Gallery.

With a municipally imposed deadline looming for VAG funding, each of the three main mayoral candidates in Vancouver was asked about the issue during recent meetings with The Globe and Mail's B.C. bureau.

Front-runners Gregor Robertson and Kirk LaPointe believe the VAG needs a new facility. Both vow to fight for funding from the federal and provincial governments, as does COPE's Meena Wong.

Some key background: The VAG, stuck for space, has been working for more than a decade to build a new facility. With a larger, purpose-built gallery, it would be able to exhibit more of its permanent collection. A new gallery would also provide more space for large-scale contemporary art, like some of the works featured in the spectacular Unscrolled: Reframing Tradition in Chinese Contemporary Art, which opens at the VAG on election day.

In spring, 2013, city council approved a 99-year lease that would see the VAG get the land for its new gallery – two-thirds of the block known as Larwill Park.

But there were conditions attached. Most urgently, the VAG would have to raise $150-million from government sources – $100-million from Ottawa and $50-million from the province (in addition to the $50-million earlier pledged by then-premier Gordon Campbell) by April 30, 2015.

That money does not appear to be forthcoming. The Ministry of Canadian Heritage has been clear this is not a priority. "This project is simply too expensive," the ministry said in an e-mail to The Globe on Thursday.

The indications from the province are similar. "We … must ensure that we live within our means," the Ministry of Community, Sport and Cultural Development wrote in a statement to The Globe Thursday. "B.C. residents expect our government to balance the budget and remain fiscally responsible."

The VAG has said it is waiting for a conceptual design, expected in early 2015, before launching an official capital campaign.

But the city-imposed deadline is less than six months away. So if that money specified by the conditional council approval does not arrive by the deadline, what happens to the land? Would it revert back to the city? Would council grant an extension? Would the condition be satisfied with money from private donors?

We asked each of the candidates how they would proceed if the government funding does not materialize by the council-imposed deadline.

Ms. Wong, COPE's mayoral candidate, did not have an answer during The Globe meeting. When reached Thursday, she said she was in favour of building a new VAG, and promised to extend the deadline. She says she would "champion" the VAG's cause with the federal and provincial governments.

NPA mayoral candidate Mr. LaPointe agreed "it's looking doubtful" that the VAG will meet the deadline, but he believes the city needs a new art gallery. "We need a better space than what we have now," he said. He said he would make it a priority to attract funds from senior governments. "I'll make it a mission to encourage both Ottawa and Victoria to kick in what we believe is necessary." In a follow-up e-mail, he said if the deadline isn't met "we will deal with alternatives then."

Mr. Robertson has positioned himself as a strong advocate for a new VAG, and has said he would help fight for that funding. "I'm certainly going to play a key role in achieving the targets," he said after the 2013 council vote granting the gallery the land. "It's an aggressive timeline, but it's a really strong case for the new gallery and I'll be putting my shoulder to the wheel on it."

When asked last week about the possibility of achieving those targets and what would happen if the VAG doesn't, Mr. Robertson said council will review the situation next spring and gauge support from the community and private donors in determining next steps.

"The next mayor and council will need to weigh the progress the art gallery's made on building a strong donor base and making inroads in Victoria and Ottawa. Given their budget circumstances, nobody expected big cheques to arrive when both are so far into the red. But that's now starting to shift, so I think the nature of the conversations with the federal and provincial ministers will be important next spring."

So Mr. Robertson, Mr. LaPointe and Ms. Wong all support a new art gallery, and say they will advocate for funding to support it. So if you want a new art museum in Vancouver, an important consideration at the ballot box should be: Who do you think will be most effective at raising the funds to build it? 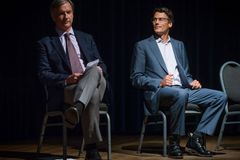 Why British Columbians vote on Saturday, and three other things that stand out about Vancouver civic politics 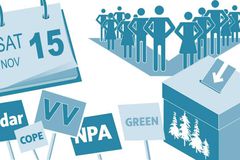 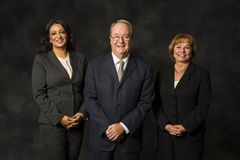