Vancouver's mental-health situation has escalated into a public health crisis, says the city's mayor, who is calling on senior levels of government for urgently needed resources.

At a joint news conference with Vancouver Police Chief Jim Chu on Friday, Gregor Robertson likened the city's current mental-health situation to the HIV/AIDS epidemic of the 1990s, which was brought on by high incidence among injection drug users.

"We are now in a situation where there are hundreds of people with severe but untreated mental illnesses that are at a high risk to both themselves and residents of the city," he said. "This is on par with, if not more serious than, what Vancouver faced over a decade ago."

The emergency room at St. Paul's Hospital has seen a 43-per-cent increase in individuals with severe mental illness and/or addiction within the past three years, according to a new report by Vancouver police.

Similarly, apprehensions by police under Section 28 of B.C.'s Mental Health Act – which allows an officer to immediately take a person to a doctor for examination if the officer believes that person has a mental illness and could be a safety risk to self or others – increased by 16 per cent from 2010 to 2012. With a 23-per-cent increase year-to-date, police expect the figure to climb.

The city and VPD outlined five recommendations: 300 more long-term and secure mental-health treatment beds; more staffing at B.C. Housing buildings to support tenants with psychiatric issues; a crisis centre at a Vancouver hospital for psychiatric emergencies; more support for Assertive Community Treatment (ACT) teams for patients living in the community; and the creation of a joint VPD-Vancouver Coastal Health Assertive Outreach Team for people who don't yet quality for ACT teams.

The city and VPD have invested in mental-health units, staff training and new supportive housing, but need the help of the provincial and federal governments to move forward, said Mr. Robertson, who wrote to Premier Christy Clark, Health Minister Terry Lake and Justice Minister Suzanne Anton about the issue last month.

Reached for comment Friday afternoon, B.C. Health Minister Terry Lake said senior officials from several ministries, including health and justice, will meet with the city on Monday to discuss next steps, but further research will be needed to determine exactly where resources should go.

"You have to respond to the changing needs of the population and provide the appropriate care where and when it is needed," he said in an interview. "I think this particular problem, we need to allocate resources once we understand the nature of the problem and the best way to use taxpayers' money."

Regarding recent calls by some B.C. mayors to re-open Riverview Hospital, Mr. Lake acknowledged there is a population that needs more than the community-based mental health care treatment the province started shifting toward decades ago. He echoed the observations of doctors, who noted drug abuse has significantly changed the makeup of patients seeking mental-health treatment. But, Mr. Lake said, it will take further research to determine what that treatment should look like.

"What we're asking ourselves now is, 'Is there a population, due to permanent damage to the brain, through the use of drugs, that may not be able to be rehabilitated?' Is there a need, then, to look at how we manage that population if, in fact, that's the case?"

Since January 2012, there have been 96 serious incidents, ranging from suicides to violent attacks, involving persons with mental illness, according to the new VPD report. The department estimates mental illness contributes to about one fifth of incidents handled by officers and one quarter of the total time spent on calls where a report is written.

"The chief and I want to make clear the gravity and urgency of this crisis, without unfairly stigmatizing people," said Mr. Robertson, who is also chair of the Vancouver Police Board. "So it is important to put this in context: This is a very, very small segment of the growing population of people who deal with mental illness."

Added Police Chief Jim Chu: "The police are becoming the first point of contact for those who are severely mentally ill, and that is wrong. These people require health care, support and medical treatment – not the criminal justice system. If we truly want a community that is safer for everyone, we must find more resources and medical professionals to help those who are suffering from severe mental illness." 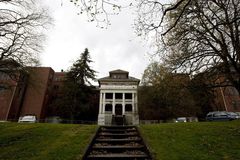 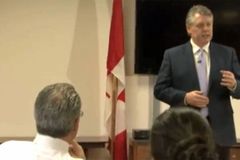 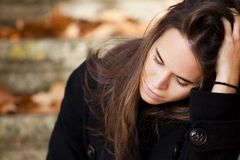 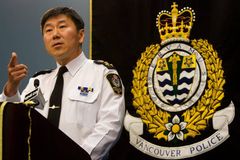