The City of Vancouver has hired an outside lawyer to pursue a possible lawsuit over the bunker-fuel spill in its harbour last week, to ensure it recovers the money it has had to spend.

And that's apparently not the only lawsuit on the horizon.

"The lawyers are starting to arrive on the scene," city manager Penny Ballem said, and agencies are doing as much as they can to collect the maximum amount of data before the fear of litigation stops the flow of information.

Ms. Ballem said the city is determined to get repayment for what it has spent on its own part of the response, as she briefed Vancouver city councillors Tuesday on the events since the freighter MV Marathassa began leaking oil in English Bay sometime last Wednesday. She did not have a figure for how much the incident has cost the city so far.

That leak has resulted in globules of the heavy bunker fuel washing up on beaches from the West End to the east side in Vancouver and along the shore in West Vancouver. About three dozen birds came into contact with oil, and no one knows yet what the fisheries impact might be.

Ms. Ballem noted that the Greek company managing the ship at the time of the mishap has a liability cap of $28-million. The Canadian Ship-source Oil Pollution Fund, created and maintained by the federal government, provides up to $162-million for damages caused by oil pollution from international shipping.

That promise of litigation comes as questions are still swirling in Vancouver about how much fuel was actually spilled, whether the response time was too slow, how much oil has been recovered, and what long-term impacts there will be.

The Canadian Coast Guard, the designated lead agency for incidents like this, has estimated 2,700 litres of fuel were spilled. But Ms. Ballem said that figure is likely low and that Transport Canada is trying to get a better estimate, possibly by looking at how much fuel the tanker was carrying before the spill started.

She said the kind of fuel that spilled doesn't stay on the surface but sinks. As well, the estimates she has had from the agencies the city is working with indicate there is still 40 square metres of oil under the hull of the boat.

Deputy city manager Sadhu Johnston noted that San Francisco, another major West Coast port, has found pockets of oil "under rocks and in nooks and crannies" for years after spills.

"The Coast Guard was on the water, managing the spill, looking for the source, and working with [Western Canada Marine Response Corporation] and Port Metro Vancouver to skim the surface of the water. Thursday morning an incident command was set up and continued through the day into today," Ms. Thomas said.

But in an interview in Victoria on Tuesday, Ms. Polak said there was a "high degree of frustration" that the Coast Guard was largely absent from the emergency operations centre until Friday morning.

The minister said while officials from dozens of agencies were gathered throughout Thursday to co-ordinate the response, a junior official from the Coast Guard was only intermittently present.

"That's where we have concerns. Their view of what constituted running it was not satisfactory to us. They had deployed a person. In the view of our staff it was too junior a person, and in addition to that they were gone for significant amounts of time," she said.

The spill was first reported through a 911 call around 5 p.m. last Wednesday.That was put through to the Coast Guard, and a Port Metro Vancouver boat appeared on scene around 6 p.m.

The Western Canada Marine Response Corporation, the private company responsible for handling any harbour spills, was notified around 8 p.m.

The Coast Guard has offered shifting timelines on its response. The spill was first reported by a person on a sailboat around 5 p.m. Wednesday. The Coast Guard initially said a boom was set up after 2 a.m. Thursday. It later said the boom was in place around midnight. It now says the boom was completely secured around the affected vessel at 5:53 a.m.

When asked about the discrepancy, a Department of Fisheries and Oceans spokesman in an e-mail said Coast Guard officials may not have had the most recent information when they initially spoke with reporters.

City officials were not notified of what had happened until around 5 a.m. On top of that, it took 48 hours for the spill to be identified as Bunker C, an extremely heavy, toxic and viscous form of fuel that most freighters use.

Commissioner Thomas said Tuesday that "90 per cent of the job is done." She said crews were still cleaning the shoreline, as well as the bottom of the affected vessel. She said water-monitoring efforts were also continuing

City of Vancouver staff examined the response to the fuel leak in English Bay, which released thousands of liters of Bunker C oil into the water that surrounds downtown. City manager Penny Ballem gave the following presentation to city council: 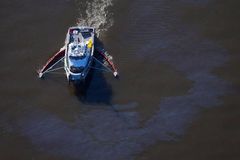 Coast Guard budget cuts roil the water in B.C. oil-spill controversy
April 12, 2015
Follow Frances Bula and Sunny Dhillon on Twitter @fabulavancouver @TheSunnyDhillon
Report an error Editorial code of conduct
Due to technical reasons, we have temporarily removed commenting from our articles. We hope to have this fixed soon. Thank you for your patience. If you are looking to give feedback on our new site, please send it along to feedback@globeandmail.com. If you want to write a letter to the editor, please forward to letters@globeandmail.com.
Comments