Vancouver police officers will – for the first time in the municipal department's history – wear body cameras as the tent city at Oppenheimer Park is dismantled.

And though the department will not provide body cameras for all patrol officers at all times, it says Vancouverites can expect to see the technology at certain events.

A B.C. Supreme Court judge has said tents and campers must be out of the park by 10 p.m. Wednesday. The city applied for an order to clear the Downtown Eastside park last month.

At a news conference Tuesday, Vancouver Police Chief Jim Chu publicly urged the campers to obey the court order. He said police will assist city staff in clearing out the park and anyone who interferes could be subject to arrest, though he added arrests would only be a last resort.

Chief Chu, without specifying, said there have been past incidents in which a video that surfaced did not provide the full context of a police incident. He said the body cameras would help provide that context.

The department has purchased eight small cameras at retail. The police chief said they'll be worn by officers "who occupy key positions of communication."

The department is not ready, Chief Chu said, to provide all patrol officers with body cameras. He said it is awaiting the results of several studies on the issue, and the cost of video storage remains a significant hurdle.

When asked if the force would use the body cameras it has purchased at other events moving forward, Chief Chu said yes. He noted the department has used hand-held cameras for events, such as the Celebration of Light, for years.

DJ Larkin, a lawyer for the Pivot Legal Society, which represented the campers in court, expressed concern Chief Chu was turning a housing issue into a police enforcement issue.

"There's a risk here that this could exacerbate an already destabilizing and sensitive situation for people," she said in an interview. "There will be people there who may be quite emotional and quite upset when the order is enforced."

Ms. Larkin said she saw several people leaving the park Tuesday, but worried where they would go. Some were not accessing services offered by the city, and others would not be welcome at shelters due to addiction or mental-health issues, she said.

Jeffrey Caldwell, one of the campers, said he would wait until the very end before he left the park. He said he did not know where he would go.

Mr. Caldwell said the use of body cameras was an attempt to portray the campers as a problem, when they've actually been part of a "great community."

He predicted there would be at least some arrests of people refusing to leave.

A few dozen people started the tent city in mid-July to highlight what they said was a lack of affordable housing. Since then, up to 200 tents and hundreds of people have been at the site.

On Sept. 25, the city applied for a court order to clear the camp, citing worsening weather and safety concerns for people at the park.

In affidavits filed as part of the court action, police and fire officials cited fire hazards and illegal activity, including theft, assault with a weapon, cocaine trafficking, and pointing a firearm.

On Sept. 30, B.C. Supreme Court Justice Jennifer Duncan granted a one-week adjournment and issued an interim order that required campers to get rid of open flames at the site. Fire officials subsequently said that order was not followed.

Mayor Gregor Robertson, who is seeking a third term in the November civic electrion, previously campaigned on a pledge to end street homelessness by 2015.

In recent weeks, the city has announced significant investments in shelter and interim housing, including a plan to lease a hotel for two years to provide 157 units of interim housing before the site is redeveloped.

Mr. Robertson on Tuesday said he hoped the clearing out of the park would be peaceful.

The Toronto Police Service last month announced its frontline officers could use body cameras as early as November, for a one-year pilot project.

With reports from Wendy Stueck and Frances Bula

With reports from Wendy Stueck and Frances Bula 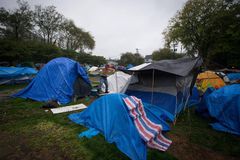 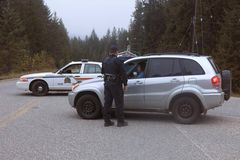 Police arrest dozens of people as four-day protest draws to a close in St. Louis
October 14, 2014 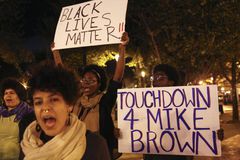