The official opening of Vancouver's Trump International Hotel and Tower today will spark protests on the city's main thoroughfares and deliberate no-shows from some local politicians and community leaders, but at least one prominent business executive will be delighted to be at the launch.

"I really, really like him. I predicted he'd win and I thought he should win," said Mr. Wall, who is a major financial supporter of B.C. Liberal Premier Christy Clark. "There's such a malaise in the world and … he's paying attention to the people who are workers, I think. This is an amazing man, whether they like him or not, to stand up to so much duress. I like this guy."

Mr. Wall is the founder of Wall Financial Corporation and a major builder, whose projects stud the city. One of his proudest accomplishments is the black Wall Centre – a Sheraton hotel – that he built on Burrard Street in defiance of what the city wanted. He said he thinks having a Trump hotel in the city will enhance Vancouver's reputation, just as the Wall buildings did.

But the flamboyant Mr. Wall is out of step with many others in the city.

Neither the mayor nor any of the Vision Vancouver council members are planning to attend the opening of the 69-storey tower, according to the mayor's office and councillors.

Although some of them have had good relations in the past with Joo Kim Tiah, the Malaysian-born owner of the tower, things took a turn after Mr. Trump entered the U.S. election campaign.

"I wrote to Joo Kim in December, reinforcing my support for the mayor's position that the name [of the tower] is at odds with the values of the city," said Councillor Geoff Meggs, who went to an event at the building before Mr. Trump entered the election. He said Mr. Trump's racist and misogynist messages are unacceptable.

"I don't think it's a good idea for anybody to go."

That is also the position taken by the city's former director of planning, Brent Toderian, who has conducted a one-man campaign for more than a year against having the Trump name on a Vancouver building.

Mr. Toderian said several people going to the event, "government leaders" and "significant folks in the region" whom he would not name, have asked him to come along with them as a guest.

But that will not happen.

"I've said, 'Your presence makes a statement,' … I won't set foot in the building while his name is on it."

Mr. Toderian, who still lives in Vancouver but works as an urban-planning consultant internationally, said that everything Mr. Trump stands for goes against Vancouver values.

"It's an anathema to Vancouver's image of progressive city-making. It's important for people in Vancouver to keep speaking out and reject his message."

The tower, designed by Vancouver architect Arthur Erickson, was originally intended to carry the Ritz-Carlton name, but the agreement collapsed during the global recession.

Mr. Tiah's company, the Holborn Group, came to an agreement with the Trump empire in 2013 on both branding and management of the hotel portion of the tower.

The site, near Georgia and Thurlow streets, has become the focus of protests since Mr. Trump won the U.S. election in November.

Mr. Toderian said he had some sympathy for Mr. Tiah at first, but has been dismayed at how he has recently taken to defending the Trump name vigorously.

"He's doubling down on the relationship."

Police are anticipating significant protests on Tuesday. Two are being publicized on Facebook. One is billed as a "Trump Welcome Party," set for for 10 a.m. to 6 p.m. on Georgia Street. A second, a "Resist 4 Peace March," is set for 4 to 7:30 p.m. at Jack Poole Plaza. About 2,000 people have indicated on each site they are interested in attending. 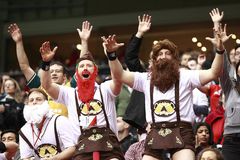 Lower mainland mayors say homelessness is in a ‘state of crisis’
February 27, 2017