British Columbia's largest real estate board is tripling the maximum fines it can levy on unethical Realtors at a time when the industry and its members are facing increasing scrutiny amid concerns some are taking advantage of the region's housing market.

During the Real Estate Board of Greater Vancouver's annual general meeting earlier this week, the 300 members in attendance overwhelmingly voted in favour of immediately increasing the potential penalty for any new misconduct cases from a maximum of $10,000 to $30,000. In a single case, the board can go after either the Realtor, their managing broker, their firm or all three – meaning a single case can generate fines of up to $90,000.

Newly elected president Dan Morrison said the board began contemplating the stiffer fines last year, before the increased public and political attention on the profession.

"It's not like we did this as a knee-jerk reaction; we thought this was long overdue," Mr. Morrison, who was elected during the same meeting, said in an interview.

The real estate board is an association run by its member Realtors and maintains local access to the Multiple Listing Service database.

It has a different role than the Real Estate Council of B.C., which is a self-regulating body that oversees profession, including licensing. The council's maximum fines remain at $10,000, though most cases in which the council disciplines agents end in a reprimand, with only some resulting in fines or suspensions.

The practices of real estate agents and how they are regulated have been the subject of intense public and political debate in recent months, in part due to investigations by The Globe and Mail.

A Globe investigation earlier this year examined the practice of so-called shadow flipping, which Premier Christy Clark vowed to ban last week. Formally known as contract assigning, shadow flipping involves sales contracts for single family houses being flipped quickly by legally assigning them to new buyers for a higher price before an initial deal closes. Typically, the profits go to speculators and real estate agents involved, not the original sellers.

Earlier this week, Darcy McLeod, who until the AGM was president of the Real Estate Board of Greater Vancouver, sent a letter to the Premier objecting to her announcement.

"The housing affordability debate in Metro Vancouver is at a fever pitch today," says the letter, which was copied to the board's 12,500 Realtors – more than half the agents in the province. "It's become emotional and political. Amid this climate, it's important to remember that market cycles come and go, but government intervention is permanent."

Mr. McLeod's letter also condemned the media for heir coverage of the issue.

"We are concerned that the media hyperbole on this topic may lead to changes with unintended consequences once the market changes, as it inevitably does," his letter says.

Mr. McLeod says media outlets have been unwilling to report that the board has yet to receive a formal public complaint about shadow flipping. However, the board typically engages in disciplinary action in instances involving disputes between Realtors, while the Real Estate Council of B.C. focuses on consumer complaints. A search of the council's website shows several cases involving misconduct related to assignment clauses have been completed in the past five years, while the real estate board does not make its disciplinary decisions public.

Mr. Morrison said he the board's decisions aren't public because they involves "issues of private membership." The board can cancel or suspend a membership, which outlaws an agent from using the MLS system, while the council can effectively kick someone out of the profession by cancelling their licence.

The board's penalty limits were last increased from $5,000 in 2004 to provide a "greater disincentive for sacrificing professionalism and ethics," the motion that passed Wednesday stated. The motion acknowledged rising housing prices, which mean higher commissions, have eroded the effectiveness of those fines.

David Eby, a Vancouver NDP MLA and opposition housing critic, said these increases are a good step, but still pale in comparison to the $200,000 in commission that unethical agents can stand to make selling just one house in his riding.

"The industry is so tone-deaf right now to what's happening in the broader community and unfortunately the [board] is also a little bit deaf to the concerns of some of [its] members," Mr. Eby said of the board's reluctance to outlaw shadow flipping. "I have real estate agents contacting me regularly saying that their reputations are being ruined by these bad actors.

"And instead of their advocacy group saying 'We need to fix this, we need to strengthen the professionalism of Realtors,' they're saying 'There's no problem and everything's been blown out of proportion.'" 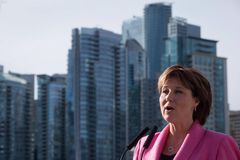