Some Vancouver residents are contributing funds to help pay for legal action against the city over the approval of a temporary modular-housing development for the homeless on Vancouver's south side.

On Dec. 6, a group of residents from Marpole filed a petition asking for a judicial review after the city granted permission to house 78 homeless people in the community.

The hearing in response to this filing will take place in B.C. Supreme Court in early January.

As they await their day in court, the residents have begun raising money to pay legal costs. Fundraising efforts began last month and have so far raised more than $60,000 – two-thirds of their goal of $90,000.

The group's anger stems from their belief that the city did not properly consult with residents about the housing development.

"There should be an injunction and they need to stop the project."

When contacted on Tuesday, a city official said Vancouver is reviewing the petition that was filed and then referred The Globe and Mail to a statement that was issued earlier in the month that states the city has held four community-information sessions in the Marpole neighbourhood with 650 people attending. It adds that the city has met with business people, community representatives and parents living in the neighbourhood.

In addition, a recent bylaw change removed the requirement for temporary modular housing – such as the project in Marpole – to go before a public hearing as long as the land does not require rezoning.

Gloria Liu, a Marpole resident, has donated $300 to the fundraising effort. She said she is hoping that if the legal action is successful, the city will relocate the site of the development.

"The location is inappropriate … the city needs to take every group's voice into consideration," Ms. Liu said.

The project, which is set for completion in February, is across from an elementary school and a small secondary school.

Ms. Liu said her child goes to the secondary school and the placement of the modular housing makes her concerned about her child's safety.

Like Ms. Liu, many opponents have expressed their concerns over safety in the community, especially since the project is proposed to include tenants who are described as "service level 3." These individuals, according to a city document, could have mental-health issues, a history of property damage and an extensive criminal background with a high risk to reoffend.

The city acknowledges the concerns from Marpole residents and says it's committed to working with the community to ensure good stewardship of the housing site.

The Marpole development is part of a $66-million commitment from the B.C. government toward building a total of 600 temporary modular-housing units throughout Vancouver.

In addition the the court filing, Marpole residents have also initiated an online petition against the development. And last month, a day after the city approved the project, a few protesters blocked driveway entrances to the property as they tried to delay construction. The B.C. Supreme Court, however, issued a ruling at the beginning of this month ordering protesters to stop blocking the site. 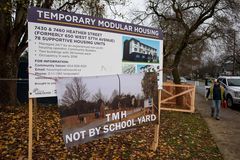 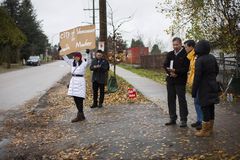 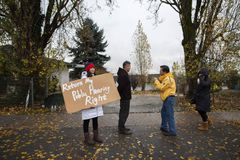