More than 300 city employees in Vancouver have been commandeered from other jobs to help with salting and sanding roads, as well as picking up garbage and ticketing people for failing to shovel sidewalks, as the region enters its fourth week of an unusually cold and snowy winter.

That's the most extreme response in the Lower Mainland, where staff and politicians from Port Coquitlam to Surrey acknowledge that this has been a particularly difficult year because of alternating freezing and thawing that has turned many roads and sidewalks into sheets of ice.

Temperatures are forecast to hover around zero for the rest of the week.

Social media and complaint lines in various areas have filled up with people concerned about elderly people they've seen falling on the street, iced-over sidewalks, and in Vancouver, weeks without recycling pick-up.

Vancouver's head of engineering, Jerry Dobrovolny, said the city has already used 7,000 tonnes of salt this year, compared with 1,000 in the two previous years.

To catch up on missed garbage collections and to help the private contractor responsible for recycling to do pick-ups, Mr. Dobrovolny's team has shifted staff away from construction projects and other tasks to do things as basic as haul household garbage bins from lanes out to main roads where trucks can access them.

"The response is changing almost daily," said Mr. Dobrovolny, who estimated the city has spent $2.5-million already on dealing with the snow and ice accumulations since the first week of December.

Vancouver appears to be the worst off.

That's in part because it's the city in the region that has the highest proportion of laneways, where garbage and recycling are collected, and the laneways don't get plowed normally.

It also is one of only three of 21 municipalities in the region that turned over its recycling pick-up to a private contractor chosen by the new industry group, Multi-Material B.C., that is now responsible for the costs of getting rid of consumer packaging and discarded products.

Allen Langdon, the executive director of MMBC, acknowledged that the private contractor MMBC hired, Smithrite, has had some problems that will need to be addressed.

Although the company has pulled in trucks and drivers from other areas to try to deal with the backlog, he concedes there are troubles.

"The main thing is they're a lighter truck that's more susceptible to sliding. The trucks are also collecting lighter types of garbage – cardboard, cans, glass – that don't provide the heft that regular garbage does."

He said the goal now is to get everything back to a normal schedule, and then sit down to discuss a better strategy for whenever Vancouver gets its next blast of winter.

As well, Vancouver has a population that is more accustomed to walking and cycling, often on side streets, to get around.

In Surrey, the District of North Vancouver, Coquitlam and Port Coquitlam, mayors and staff say they feel like they are managing to stay ahead of the problem.

Port Coquitlam Mayor Greg Moore said the city crews have not missed a single garbage, recycling or organics pick-up. His council chose several years ago not to use a private contractor for any of those services.

As well, he said, every road, even local roads and the few laneways that have garbage pick-up, have been plowed.

Most other municipalities' staffs said plowing local roads is just generally not possible.

However, they said they significantly changed some of their practices after the 2008/2009 winter, when Vancouver had a series of snowfalls during a period of about six weeks.

"We learned big lessons then," said Rob Costanzo, Surrey's manager of engineering. The city moved to a system of being more proactive and it now brines major roads ahead of a snowfall, which prevents ice from forming.

The city expanded the amount of equipment that could be used for snow conditions and now has four times the amount of trucks – 62 pieces in all – that can be deployed for the 2,700 lane-kilometres of road it designates as high priority. Vancouver, a much smaller city, has 44 pieces of equipment.

As well, Surrey has installed cameras at major intersections, which allows staff to direct plows to the worst-hit spots in Surrey's huge territory. And it has expanded its salt-storage capacity by triple, to 14 tonnes.

For recycling, it has a contract with a private company, but it manages that contract directly, not through MMBC.

In the District of North Vancouver, staff made a number of changes after the snowy winter eight years ago, including restricting parking on some streets to ensure there would be room for plows. 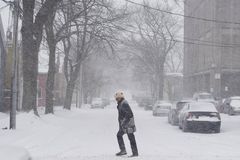