The unexplained deaths of two belugas at the Vancouver Aquarium last fall were a "tipping point" in the city's debate over cetacean captivity and helped lead to a historic vote to ban the practice, says a park board commissioner.

Sarah Kirby-Yung, a commissioner who previously worked as the aquarium's spokeswoman, said after two nights of emotional hearings and thousands of public submissions it became clear that banning cetaceans at the aquarium was "the will of Vancouverites."

"Our job is to listen to the public," she said Friday. "This is an issue where public sentiment has been changing and, progressively, people have been feeling more and more uncomfortable."

The board voted unanimously Thursday night to ask staff to bring forward a bylaw amendment to prohibit the importation and display of live cetaceans in Vancouver parks. Staff will now consult with legal counsel and report back with an amendment by May 15.

Cetacean captivity has been hotly debated in Vancouver for years, but the deaths of beluga Aurora and daughter Qila last November thrust the issue back into the spotlight. While the cause of the whales' deaths just weeks apart is still not known, the aquarium said it hasn't ruled out a toxin in the water or a "malicious action."

The park board's decision comes as the aquarium is undergoing an $100-million expansion. Last month, it announced plans to bring in up to five belugas in 2019, when larger enclosures were set to be completed, and to ultimately phase out its cetacean program 10 years later.

On Friday, the aquarium said the plan was now in jeopardy and it is "deeply disappointed" with the board's vote. The plan would have allowed it to continue to provide a home for rescued and non-releasable animals, and included an expanded cetacean research program, it said.

"A ban on displaying all cetaceans at the Vancouver Aquarium will have a deep impact on the research we do and devastate our marine mammal rescue centre," president and CEO John Nightingale said in a statement.

The aquarium said the rescue centre is the only marine mammal hospital of its kind in Canada and under an amended bylaw, it may no longer be able to rescue stranded whales, dolphins and porpoises that are injured or sick.

Peter Fricker of the Vancouver Humane Society said the aquarium's research was not substantive and did not outweigh the negative impacts of captivity on animal welfare. The facility has only published 13 peer-reviewed scientific papers on its cetaceans in 30 years, he said.

"We don't believe the aquarium when it says all of a sudden that now this beluga research is vital. It just wasn't credible to us that having a relatively poor record on producing research on belugas, that it would suddenly be so important."

A 2014 park board report found the aquarium had published 20 scientific papers on cetaceans, but it included masters' theses and PhD dissertations.

An industry group joined the aquarium on Friday in opposing the park board decision. Dan Ashe of the Association of Zoos and Aquariums said it was "troubling" and his group would work with the aquarium to influence the policy.

But the park board's general manager, Malcolm Bromley, said the policy decision has been made. After staff draft the amendment, there will be three readings before it is approved. But all three readings could occur at one meeting, meaning the bylaw could take effect on or before May 15.

The aquarium has three cetaceans in captivity: Helen, a Pacific white-sided dolphin; Daisy, a harbour porpoise; and Chester, a false killer whale. Bromley said the bylaw amendment could either allow them to stay until their deaths or require their removal from the park.

He said the debate over cetaceans in captivity is long-standing in Vancouver.

"It's been 25 or 30 years of various strong opinions on both sides of the issue. I would stay this is one of the biggest decisions the park board has made." 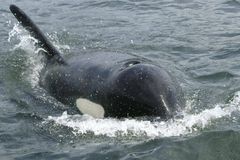