Vancouver Mayor Gregor Robertson says his administration is working on an alternative to build the Broadway subway across the city, regardless of the outcome of a controversial plebiscite on a new tax to pay for transit and other transportation projects.

Results of the vote are expected to be released in the coming weeks, though polling during the campaign cast doubt on the Yes side's chances, despite warnings from the region's mayors that billions of dollars of infrastructure will be needed as the population grows.

"We're working on Plan B now in the event there is a negative outcome," Mr. Robertson told reporters on Wednesday after a speech to the Urban Land Institute in Vancouver.

"Obviously, we're hopeful we have a Yes vote and we can proceed as planned with the mayors' 10-year investment, but if that doesn't work out, we'll go to Plan B and look at alternatives."

However, the mayor declined to offer specifics on the plan for building the $3-billion project from Commercial Drive to Arbutus, currently hinging on plebiscite funding as well as money from the federal and B.C. governments.

Asked for details on Plan B, Mr. Robertson said, "It's too early to say."

In Surrey, on the night she was elected mayor last November, Linda Hepner said the first phase of light rail for her city would be running on the evening of the 2018 election, regardless of the plebiscite outcome. Ms. Hepner has also declined to offer specifics about her plans except to say they would cost more than the plebiscite option.

Ballots are now being counted by Elections BC in the transit plebiscite – voters were asked to endorse or reject a 0.5-per-cent sales tax in the Vancouver region that would help pay for a decade of transit and other transportation improvements, including the Broadway subway and Surrey's light rail.

Gord Price, director of the City Program at Simon Fraser University, said he expects that Mr. Robertson is talking about some kind of levy on development to help raise money, but saluted the Vancouver leader for affirming the necessity of expanding transit in the region.

"I'm surprised. If he's got a mechanism for capital projects of this scale, the implications are profound," Mr. Price said in an interview on Wednesday.

Still, he said he was curious about how the city would cover operating costs for such a project.

Mr. Price suggested the entire plebiscite process has been a waste that postponed the need for hard decisions on transit in the region. B.C. Premier Christy Clark announced the plebiscite concept as part of the platform for the B.C. Liberals ahead of campaigning for the 2013 provincial election.

"The Premier forced it on us," Mr. Price said. "Every part of it was a waste."

Mr. Robertson echoed that sentiment on Wednesday. "The transit referendum was the province's idea and the region hasn't had a choice in terms of our next steps," he told reporters. "The referendum process is in the way of that."

But Jordan Bateman, B.C. director of the Canadian Taxpayers Federation and a vocal advocate for a No vote, said Mr. Robertson's comments suggested that mayors had been fear mongering in the transit plebiscite campaign.

"Mayor Robertson is closing in on a decade in power – the fact there has been little progress on a Broadway subway is a failure of his leadership, not a failure of regional taxpayers not paying enough to TransLink," Mr. Bateman said in an e-mail exchange.

"With his Plan B, we hope the mayor bears in mind the concerns expressed by so many people during the campaign: that TransLink needs to be fixed first, and that we are overtaxed already."

Mr. Robertson's comments come a week after the Mayors' Council on Regional Transportation said it had spent $5.8-million to campaign for a Yes vote – funds allocated by the board of directors for TransLink, the regional transit authority.

B.C. transit votes are in, key players planning for either outcome
May 15, 2018 Turnout at 45 per cent in Vancouver transit vote as deadline looms
May 15, 2018 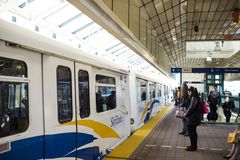