Visitors wandering through some of Canada's largest cities could be forgiven for assuming marijuana is legal. Dozens of storefronts have sprouted up in Vancouver recent years advertising pot for sale under the guise of medicine, and they're becoming increasingly common in Toronto and other cities.

The stores are all illegal, but the prospect of legalization under Justin Trudeau's Liberals has emboldened operators to expand and left local governments and police forces unsure of what to do.

Here's what you need to you know.

Last updated Jan 21: The City of Vancouver says 14 dispensaries have passed the first stage of its licensing system, dispensaries expand into Toronto, and politicians consider what legalization will mean for the pot shops. 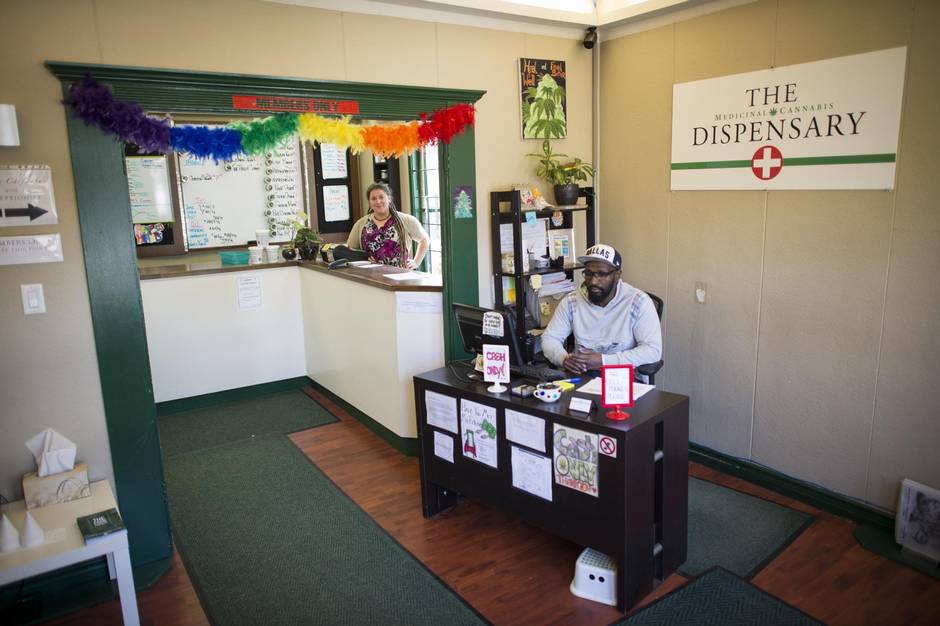 The Dispensary a medical cannabis dispensary in Vancouver. (John Lehmann/The Globe and Mail)

What is a dispensary?

Dispensaries are storefront operations that sell marijuana to customers who say they have a medical need. Some operations require customers to provide medical documentation, such as a note from a doctor or other health-care professional, but others are less strict. The owner of Canada's largest chain has said he will provide up to a gram of marijuana products a day to any adult who says they are sick, without any medical documents. Some have on-site naturopaths, and at least one allows prospective patients to consult one via video chat. Unlike the legal medical marijuana system, which provides only dried pot and oil, many dispensaries sell pills, creams, cookies and other products made with cannabis. 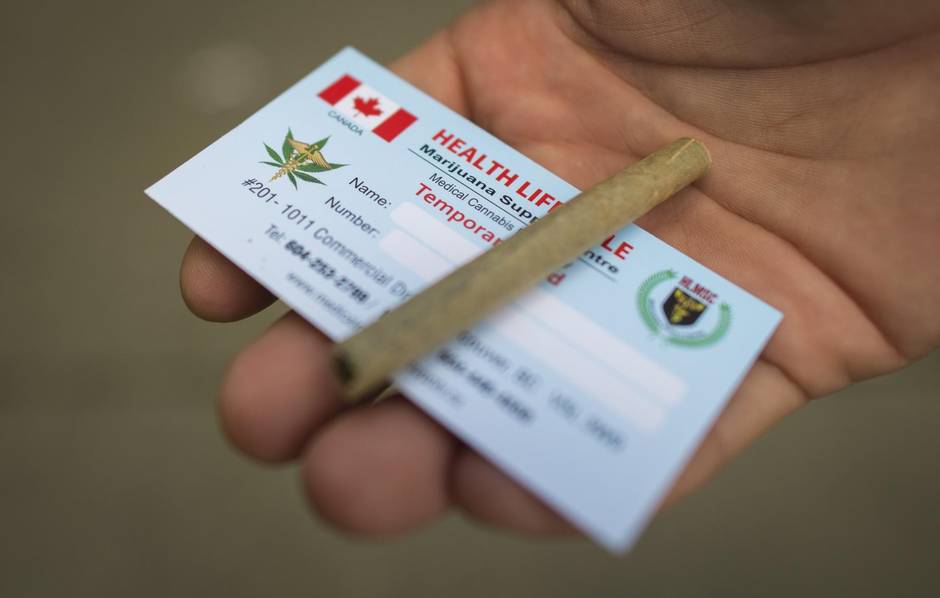 The Healthy Lifestyle dispensary on Commercial Drive handed out free cookies and joints in May. (John Lehmann/The Globe and Mail)

No. The Controlled Drugs and Substances Act makes it illegal to sell pot outside the federal medical marijuana program, which permits roughly 20 licensed producers to provide the drug through a mail-order system. Medical marijuana dispensaries are selling and obtaining it illegally. Some dispensaries have said they get their supply from home growers who were approved under the old federal system, many of whom have been allowed to continue growing due to an ongoing court case. Still, those authorizations from Health Canada do not allow those home growers to sell the drug to dispensaries.

Over the past several years, dispensaries have sprouted up in many communities across British Columbia, with the majority located in Vancouver and Victoria. Recently they have begun spreading to other Canadian cities, including Toronto and Ottawa.

The City of Vancouver and its police department have taken a hands-off approach to dispensaries, intervening only if there is a risk to the public, such as sales to minors or links to organized crime. The police department says dispensaries are a “low priority,” although it has executed search warrants at roughly a dozen locations; most of those stores re-opened within weeks.

That reality has allowed the number of dispensaries in the city to explode, to more than 100 today from 14 in 2013, making them more common than Starbucks (the city’s database of business licences lists 91 Starbucks locations). Dispensaries operate openly in all corners of the city, many with sidewalk sandwich boards or bright neon signs advertising medical marijuana for sale.

The Liberals’ election victory last year appears to have emboldened operators elsewhere, with roughly 40 dispensaries up and running in Toronto by the beginning of 2016, up from about a dozen just a year earlier. Like in Vancouver, the police department in Toronto says dispensaries are not a priority.

The police response can be uneven and unpredictable. In Victoria, police have largely declined to intervene as the number of dispensaries increases, while the RCMP have taken action in some cities in B.C., such as Kelowna and Nanaimo.

What does the federal government say?

The former Conservative government was adamant that dispensaries are illegal and called on the cities and local police forces to shut them down. The Conservatives did not take any formal steps to make that happen.

The Liberals were elected last year on a promise to regulate and legalize recreational marijuana, leading to endless speculation about what that will look like. The new government hasn't, however, offered many details and hasn't said whether dispensaries will be brought into the new system. Prime Minister Justin Trudeau has appointed MP Bill Blair, a former Toronto police chief, to oversee the process. Mr. Blair has said the distribution of marijuana would be strictly controlled and regulated. The B.C. government has urged Ottawa not to allow dispensaries under the legalized regime, and Ontario Premier Kathleen Wynne has said pot should be sold in liquor stores. 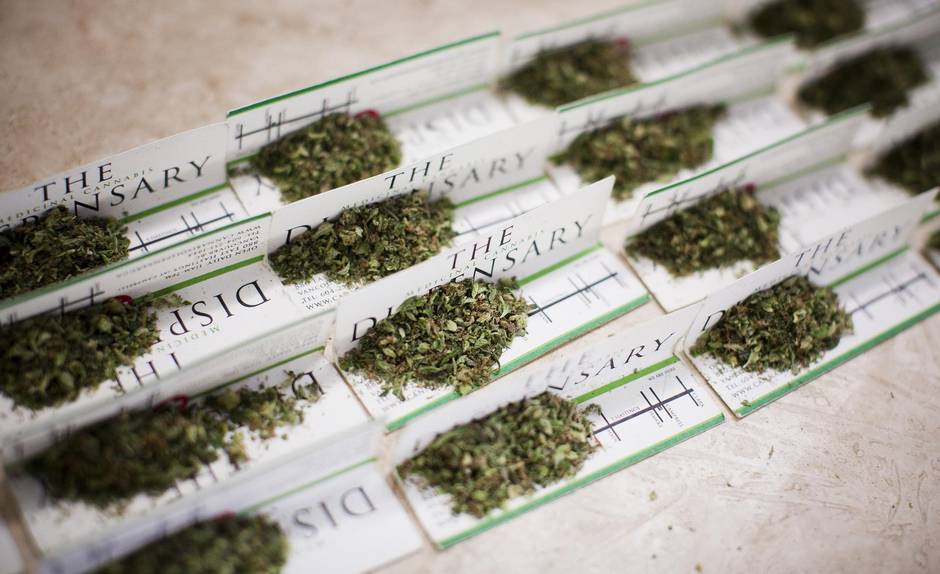 Marijuana at the Vancouver Medicinal Cannabis Dispensary. (Ben Nelms for The Globe and Mail)

What is the City of Vancouver doing?

Despite the city’s previous claims that it had no way to regulate marijuana dispensaries, council approved a proposal to create a special licence category for “marijuana-related” businesses, including dispensaries. The rules created a system to consult the community before granting licences, impose a licence fee of $30,000 a year, and prohibit dispensaries from operating within 300 metres of schools, community centres or other dispensaries. Non-profit compassion clubs would only pay $1,000 for the licence and would be given priority in cases where a group of dispensaries are too close together. Edible capsules, tinctures and oils will be allowed, but edible products, such as cookies, will not due to concerns they would appeal to children. So-called vapour lounges and cannabis cafes are already prohibited under the city's anti-smoking bylaw and the city says it will be more aggressive enforcing those rules. The city will also reject licence applications from dispensaries that allow smoking or vaping on-site.

The federal Conservative government strongly opposed the idea, with the health and public safety ministers at the time urging councillors not to proceed.

Other communities in B.C. such as Victoria, Port Alberni and Nanaimo are planning similar measures. Toronto is awaiting a report from its chief medical officer later this spring before it contemplates a similar move. 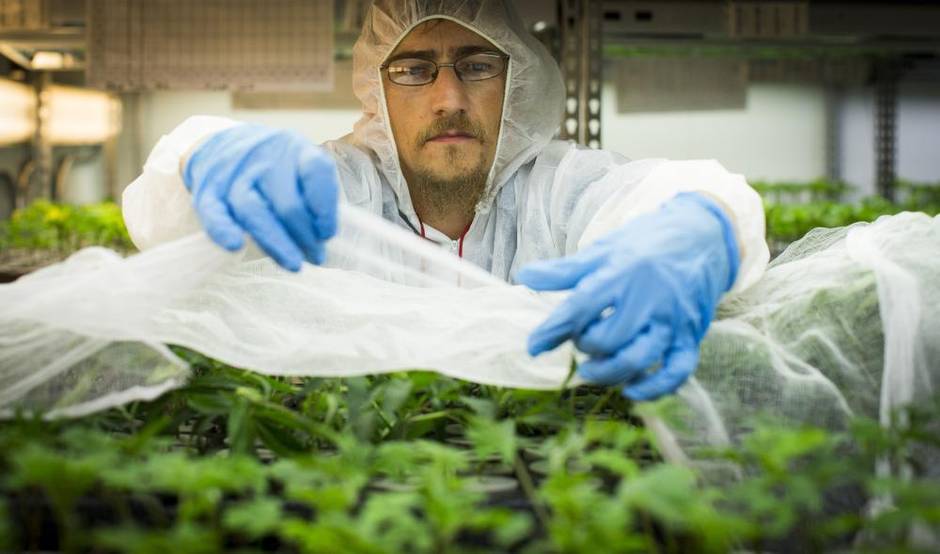 How is this related to the federal mail-order system?

In 2014, the federal government overhauled the medical marijuana system by establishing a regulated commercial market in which patients order the drug from a list of licensed producers. This legal system is unrelated to the dispensary issue. Some licensed growers are now calling on Ottawa to allow them to mail recreational pot to adults across the country – a suggestion the federal government quickly rejected. 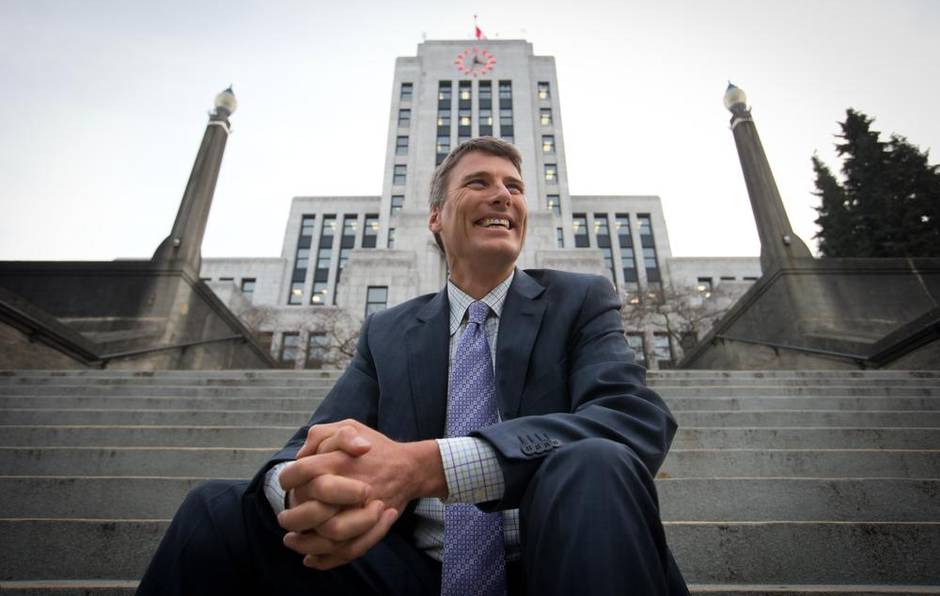 Vancouver Mayor Gregor Robertson sits for a photograph outside City Hall. (Darryl Dyck for The Globe and Mail)

What happens next for Vancouver?

Vancouver's city council approved the new regulations with a vote last June, giving dispensaries and compassion clubs until August to apply. The city says it received a total of 176 applications; of those, 69 were from so-called compassion clubs and the rest were for retail shops.

Fourteen applications passed the first stage, which focused entirely on where they were located. Six or seven are expected to be added to that list. Another 130 applications were rejected because they would be located within 300 metres of schools or community centres, though many of those are applying for an exemption.

The next step is a review process that will consider community input. In addition, store owners and employees cannot have drug convictions for the past five years.

Despite that lengthy process, dispensaries may not be a permanent reality in Vancouver. The city has always said it was only regulating dispensaries because the federal government was failing to act; if, in the end, the legalized system does not include dispensaries, the city says it will shut them down and instead apply their zoning rules to whatever legal stores are permitted.