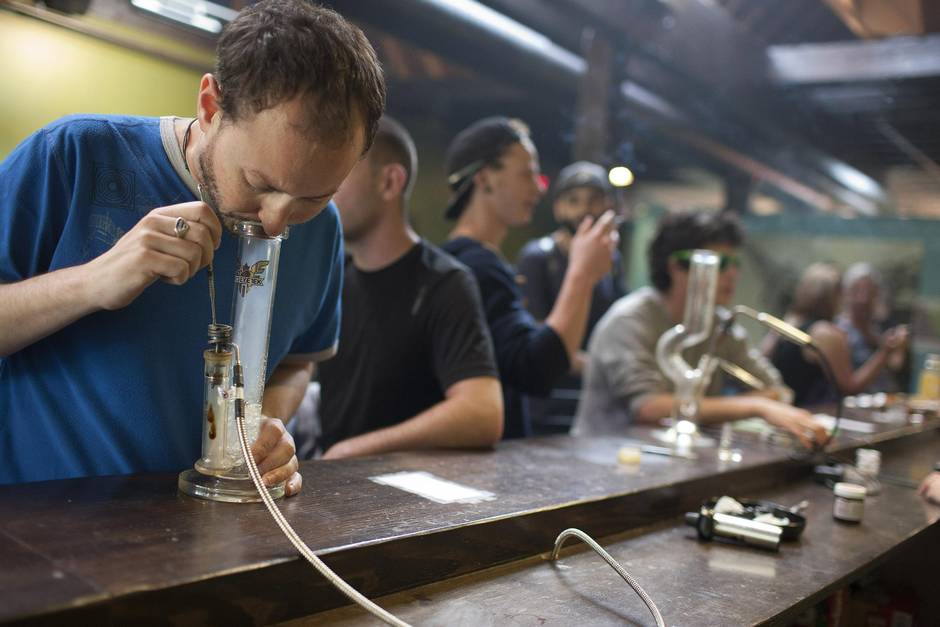 
Vapour lounges
in a legal fog


As Vancouver's illegal marijuana dispensaries test the limits of governments and police, vapour lounges that allow customers to smoke and vape are pushing the boundaries even further. But as Mike Hager reports, the city is set to crack down


Neil Blake does a lap of the bar, bumping fists with friends and cracking jokes, before sidling up to a vaporizer for a “dab” of wax so concentrated with pot’s psychoactive ingredient that he likens it to smoking a whole joint in one breath.

The affable 37-year-old says he started dabbing to ease pain from his multiple sclerosis that a cocktail of steroids and pharmaceutical drugs cannot always alleviate. The former software engineer has been coming to this location in Vancouver’s West End every day since the end of April, when his regular vapour lounge in Chinatown run by the Eden dispensary chain was damaged by a fire at a neighbouring restaurant.

“It’s honestly to medicate in a social environment: Instead of being at home myself all day, I get to be with people,” Mr. Blake said when asked why he keeps coming back to the lounge, which is connect to an Eden dispensary on Davie Street.

A few cannabis cafés run by legalization activists tested the leniency of authorities over the years. Several vapour lounges, similar to the cafés but offering high-tech smoking devices, have opened more recently, including some run by dispensaries, as illegal pot shops exploded throughout Vancouver. The city has made it clear the vapour lounges will banned under forthcoming dispensary regulations, which will create a new business licence for marijuana dispensaries and restrict where they can open. 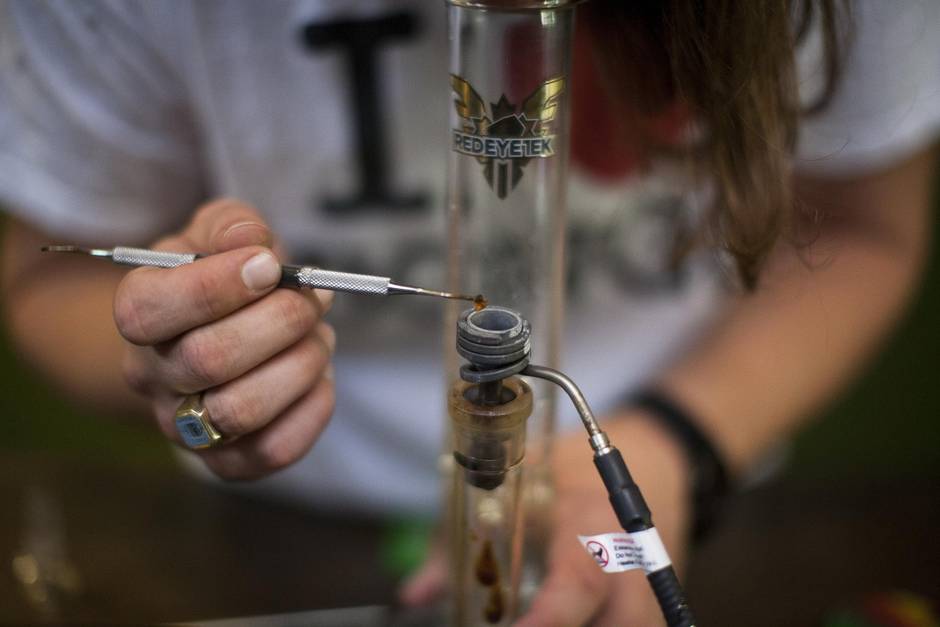 Travis Williams uses a vaporizer at Cannabis Culture lounge in Vancouver. (Photos by Rafal Gerszak for The Globe and Mail)

The Vancouver Police Department, which is more concerned with violent gangs trafficking harder drugs, typically raids only the cafés and vapour lounges that consistently let in minors or violate the industry-wide BYOB (bring your own bud) rule by selling product on site.

While the city is preparing to hand out business licences to dispensaries, it says it is not prepared to show the same tolerance for vapour lounges. The difference, says city manager Penny Ballem, is the health risk posed by inhaling the drug – something the city and local health authority view as just like tobacco smoke or e-cigarette vapour.

“What we know is the public-health people in this country and in other places in the world have determined that vaping has a real risk to people’s health,” she said.

“We need to find a middle ground that doesn’t treat people who use as criminals, but acknowledges the public health consequences.”
Neil Boyd, criminologist, Simon Fraser University

Ms. Ballem said officials can shut down the lounges under an anti-smoking bylaw amended last fall that bans vaping in public spaces, “whether it’s marijuana or anything else.” Dispensaries that allow customers to consume any cannabis products on site would not be able to get the special business licences, she said.

Staff estimated that it would cost about $1.4-million in the first year to implement the proposed regulations. Some of that money will pay for extra bylaw enforcement officers, Ms. Ballem added.

Still, Ms. Ballem acknowledged that “we’re not able to visit everybody every day.” She said dealing with a rush of dispensaries applying for the new business licences will be a “quite significant stress” on the city’s bylaw enforcement and building inspection branches. 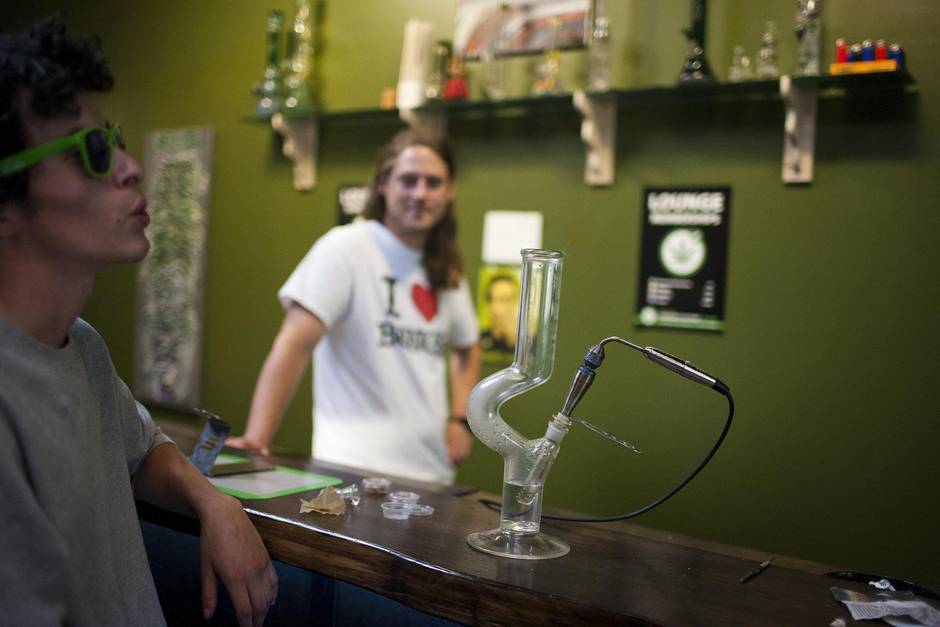 Back at the Cannabis Culture lounge on Davie Street, Mr. Blake happily mingles with recreational users, but says he would rather vape with a friend or two on the leather sofas than join the crowd at the bar oohing and ahhing when the latest metre-long bong is unveiled.

A monthly membership costs $39, and the daily drop-in fee is $5. Those prices do not include any cannabis products, but those can be easily bought by walking up to a desk across the hazy second floor from the dab bar. Anyone with Eden dispensary membership can enter a separate room, where a host of edibles, buds and waxes can be purchased and then brought back into the lounge or taken outside. (In the street-level bong shop below, Cannabis Culture also sells mind-expanding, and legal, natural drugs such as peyote.)

Criminologist Neil Boyd of Simon Fraser University, who has written extensively on illegal drugs, said if it is legitimate for people to drink alcohol at bars, then vapour lounges should also be allowed, as they pose much less risk to public health.

“I remember talking to a police officer once and he said, ‘You know, Neil, if it wasn’t for alcohol, I’d only have a part-time job,’” Prof. Boyd said. “You couldn’t actually say that about cannabis. Cannabis doesn’t produce the same kinds of social disruption that alcohol abuse does.”

In the absence of any regulation from an “obstinate” federal government, he praised the “creative approach” taken by the City of Vancouver to monitor the dispensaries and vapour lounges.

“Commercial promotion of marijuana is one extreme and criminal prohibition is the other,” Prof. Boyd said.

“So we need to find a middle ground that doesn’t treat people who use as criminals, but acknowledges the public health consequences and makes sure that young people are well-informed about the risks of constant use.” 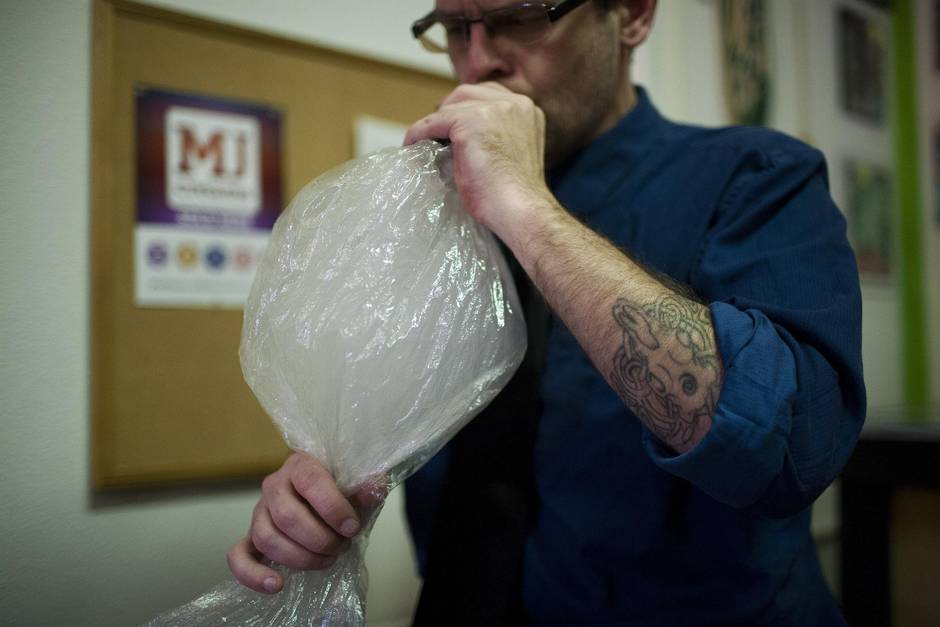 The basement smoking and vapour lounge run by David Malmo-Levine, a philosophical pot evangelist, was raided 20 years ago for letting anyone toke, including teenagers as young as 13.

Mr. Malmo-Levine, who fought and lost his drug trafficking charge from that raid in the Supreme Court of Canada, now owns the Stressed and Depressed Society Association dispensary. At the East Vancouver pot shop, clients must have a Skype consultation with a naturopath before getting a membership – a comparatively strict barrier to entry compared with the “smoke-easy” that landed him in jail.

He said he still believes Canada should legalize marijuana, even for recreational use. “What does the word recreation mean?” he said. “If you look at the etymology, it means to restore to health. Well, I thought health was a part of medicine, so recreation is not actually the antithesis of medicine, it’s a subset of medicine.

“And once that epiphany reaches everybody, there will be no one left to hate, fear or despise for trying to be relaxed, hungry and happy.”

Still, he has every intention of making potential clients jump through the necessary hoops at his dispensary to navigate the current grey system.

“I don’t want to go to jail again, it’s not very nice there. The food leaves much to be desired and I can’t say much for the view either.”

Of the roughly 20 vapour lounges operating in Canada, the vast majority serve medical marijuana patients and recreational cannabis enthusiasts in Toronto and Vancouver.

Most of Toronto’s approximately six vapour lounges operate below the radar of the mainstream public and are upstairs from or in the back of bong shops. Last month, Ontario passed a bill banning smoking e-cigarettes in non-smoking areas, but it remains to be seen whether the law will be used to crack down on vapour lounges, as Vancouver has pledged to do using a similar civic health bylaw.

Ottawa’s first vapour lounge was forced to close last month for violating building codes. Its owner has pledged to have his paperwork in order and reopen as early as the end of next week. Meanwhile, another vapour lounge has opened in the city, despite the mayor voicing his displeasure at the idea of vapour lounges.

In Halifax, a swanky vapour lounge that opened last fall is still operating without any reported issues with the authorities.

A handful of compassion clubs in other cities are allowed to offer their medical marijuana patients areas to smoke or vape, because they have a right to take their medicine in a safe place away from landlords who may not allow them to do so at home, according to Dieter MacPherson, executive director of the Victoria Cannabis Buyer’s Club.

He said any regulations of vapour lounges must clearly distinguish between recreational users and be careful not to restrict patients’ access to their medicine.

“Progressive regulation is a benefit to everybody involved,” he said.