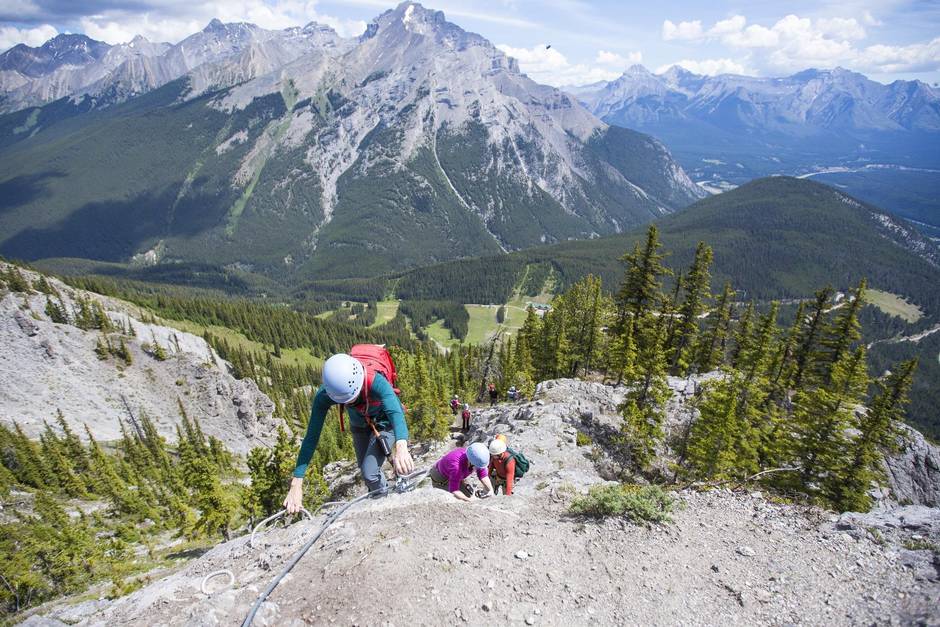 Participants take part in a four-hour hike on a via ferrata route on Mount Norquay in Banff, Alta. (Chris Bolin for The Globe and Mail)


Ski hills see a future
along the 'iron road'


Mountain resorts searching for ways to adjust to a warmer climate are stringing up systems of cables and rungs for via ferrata, reports Justine Hunter


Edging along a rock face on the east summit of Mt. Norquay, my boots are balanced on stainless steel rungs that have been set deep into the stone. The traverse around a corner feels exposed – below, there is nothing but air for 70 metres. But secure in a harness with a pair of carabiners clipped on to a steel cable, I have latitude to soak up the details: the crisp mountain air, the emerald water of the Bow River far below, and the texture of the limestone that offers up accommodating pockets to grip.

The via ferrata, with its system of cables and rungs, offers a quick and accessible path to satisfy the majestic pull of the mountains. From the top of the Norquay ski lift, with a little scrambling, a crossing over a swaying suspension bridge, and a series of ladder-like ascents, our party of seven reaches the ridge line in just three hours. My companions are mostly neophyte climbers; the oldest is 78 years old.

Developed for warfare in the Alps in the First World War, the via ferrata – Italian for “iron road” – is helping the struggling ski industry in Western Canada adapt in the face of climate change. With its carefully placed stainless steel rungs, treads and cables, the course strips away the barrier of climbing with rope. There is no skill required – although some comfort with heights is a plus. 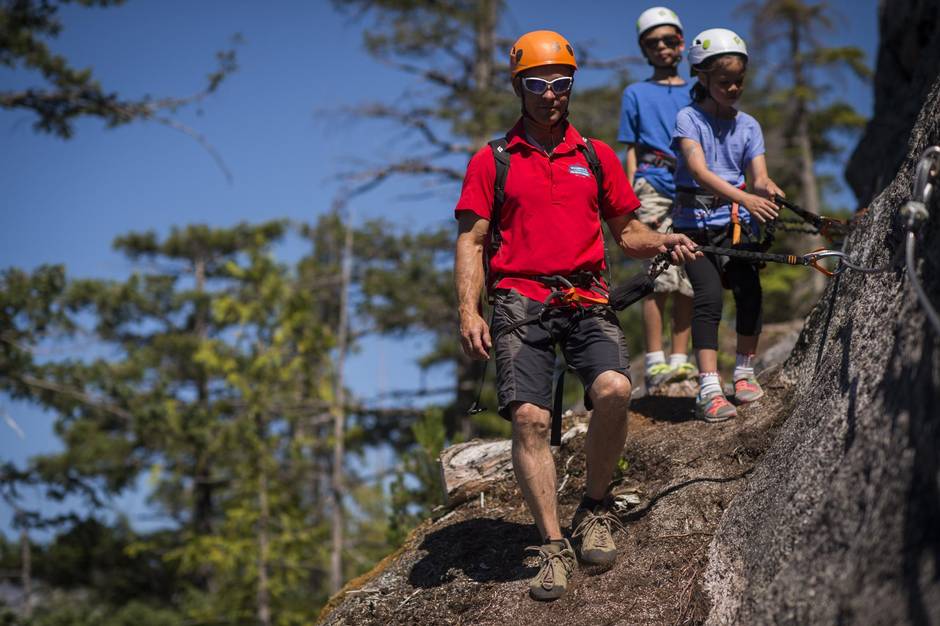 Eric Dumerac, a guide and owner of Mountain Skills Academy, leads a group on a via ferrata tour in Squamish, B.C. (John Lehmann/The Globe and Mail)

The via ferrata routes have opened up a new experience for visitors to Banff National Park and to Whistler in British Columbia. They are also helping secure the ski resorts’ future by attracting paying customers up on the hills when there is no snow.

The glaciers across western North America are in rapid retreat, with widespread implications. Those who make their living in the alpine recreation industry bear witness to the changes every day on the job.

“I have seen the glacier retreat five metres,” said Eric Dumerac, a hard-core rock climber who is the director of the Mountain Skills Academy in Whistler

Whistler has been well ahead in the race to become a four-season destination. The academy opened its first via ferrata in the alpine terrain above the Whistler village in 2006. This summer, the company opened a second route in nearby Squamish. Mr. Dumerac wanted to build something that would appeal to absolute beginners and experienced climbers alike.

“It’s about carefree climbing; it is fun in the terrain that we love,” he said.

Mr. Dumerac’s great-grandfather helped build via ferratas to move troops in the Alps. There are more than 1,000 routes in Europe now and Mr. Dumerac has helped install a via ferrata in Switzerland.

He sees his business model in transition. The ski industry isn’t dying, he says, but the trade is going to have to look to higher elevations. He spent the past winter guiding alpine ski excursions.

One of his company’s most popular tours is a hike across the Whistler glacier, and that is where he confronts the reality of change. In mid-June, he was guiding on the Blackcomb buttress, overlooking the Horstman glacier. He said it looked like it would at the end of the season, not the beginning.

“It’s crazy. It’s a serious concern,” he said. “All the North Shore mountains closed this year [for skiing] – that’s a dagger to the heart of those operations.”

The academy’s newest route in Squamish is designed to lure the broadest range of people up into the mountains. It takes just 90 minutes and, unlike the other offerings in B.C. and Alberta, it can accommodate kids under the age of 12. A 45-minute drive from Vancouver, and based at the top of the popular Sea to Sky Gondola, it is a gentle introduction to mountaineering.

The Squamish route begins with a short hike through an old-growth forest of cedar and Douglas fir, some 400 years old. We set out in a group with five children in tow; the youngest is eight years old.

The first reveal coming out of the forest should be a stunning view of Howe Sound, but on this day the haze from drought-fuelled forest fires across southern B.C. had shrunk the world. The sun hangs in an eerie red ball and the kids tackle the first series of ascents and traverses without seeing just how high we are.

The heights sunk in on the sky ledge traverse, a steel ledge affixed to a wall of glacier-worn granite. Mr. Dumerac encourages the group to sit down and dangle their feet over the edge. “You know how sometimes you sit on the dock at a lake, and you dangle your feet in the water?” he coaxed.

But there is a 60-metre drop-off, and only rocks and forest below. Not everyone in the group takes up the chance to swing their legs over the edge.

By the time we climb the crest, however, the kids who earlier struggled with the heights were now leaning back in their harnesses, hands in the air, elated because they conquered their fears. On the gondola ride back down, they spot a pair of mountain climbers on the face of Wrinkle Rock, and watch with a new fascination.

Over the past 50 years, throughout most of the mountains in Alberta and B.C., the average nightly low temperature in the middle of winter has increased; in parts of the Rockies, it can be 5 C warmer. In the high altitude of Banff, however, the changes are not as startling when measured against conditions in coastal ski resorts where a warm and wet winter led to early closings this year – a combination of cyclical and long-term trends. 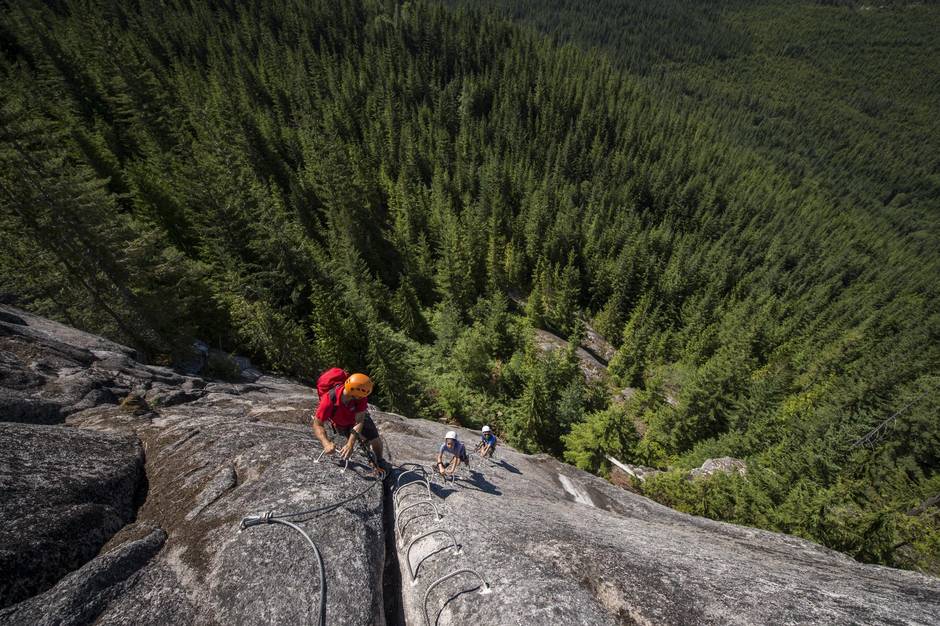 Eric Dumerac, a guide and owner of Mountain Skills Academy, leads a group on a via ferrata tour in Squamish, B.C. (John Lehmann/The Globe and Mail)

Most major ski resorts have now invested in snow-making equipment, and next winter Whistler-Blackcomb will conduct a new snow-making pilot project aimed at preserving the Horstman Glacier on Blackcomb Mountain.

Making snow is one tactic. The other is diversification, and summertime offerings, such as the via ferrata, are part of the survival strategy.

Norquay was one of the first ski resorts in Canada with a mechanized chair lift. But the aging facility has been on the decline; the summer house at the top of the lift was boarded up for 25 years. Now, the summer house has reopened as an upscale bistro, while the winter offerings include a snow tube park.

In his 25 years in these mountains, guide John Thornton (better known as JT) has watched the glaciers shrink, and freezing levels rise in altitude. The Rockies are still exhilarating, but the way people experience these mountains will change.

He came to Banff in 1981 and built his career around the ski industry. Since 2013, he has been mapping out these new assisted climbing routes on the Norquay mountainside he knows so well.

The new offerings at Norquay mean more time outside for Mr. Thornton, who quietly assesses his clients before heading up on the chairlift to the start of the route. He jokes that putting on your climbing harness is the sobriety test, but the key assessment is engineered into the route. The first pitch is the steepest. If a visitor balks there, this is the time to turn around. Of the 3,000 people who climbed the Norquay via ferrata last summer, a handful turned back.

At the top of a buttress on Mt. Norquay, the next stage of our tour crosses the ridge line. We pause to watch a bird the size of a sparrow, with delusions of being a great bird of prey, coasting on a thermal column. Tiny alpine flowers are in bloom and the air is tinged with the scent of fir and whitebark pine. 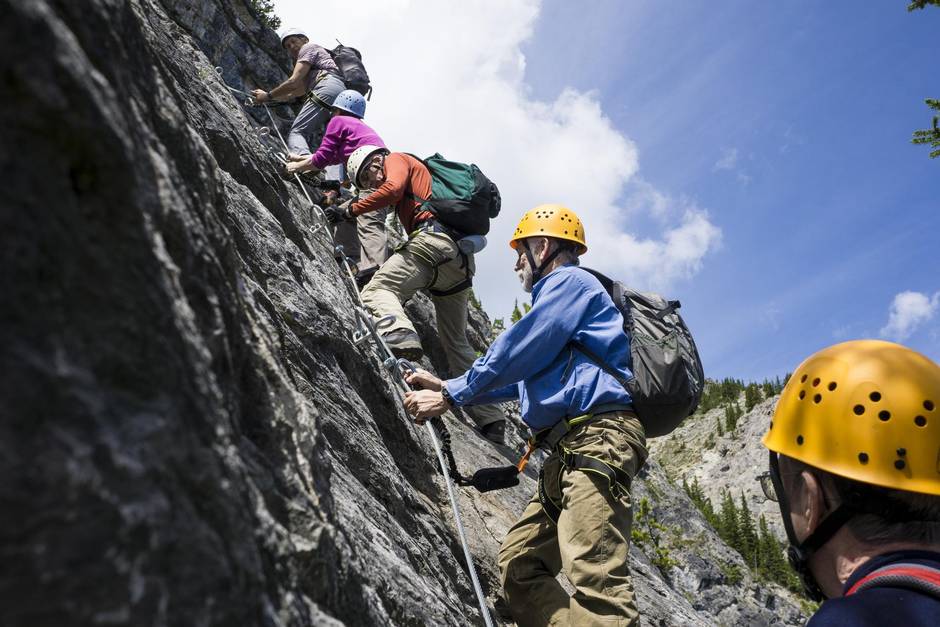 Participants on a via ferrata course on Mount Norquay In Banff, Alta. (Chris Bolin for The Globe and Mail)

On either side, the mountains fall away precipitously and the path is level, so there is no safety system along this stretch. We carefully hike along the path across three buttresses, before a thigh-burning descent down a series of switchbacks.

This summer, at least four commercial climbing routes will open in B.C. and Alberta: Besides the new route in Squamish, Norquay is opening a third route. In Golden, B.C., the Kicking Horse Ski Resort will have two routes on offer this summer.

“It’s a strategic diversification,” said David Lynn, president and CEO of the Canada West Ski Areas Association. These commercial via ferratas, where day-trippers are outfitted and led by professional guides, are a fairly new concept in Western Canada.

Mr. Lynn’s members have just been through two financially challenging years, with early closings because of limited snow. “Half of our members are reporting losses,” he said. “There is little doubt global warming is a significant threat to the ski industry.”

The via ferrata offers a taste of the physical and mental challenge of mountain climbing. It’s also a way to allow people to access the mountains while adapting to the creep of climate change.

“We have a resource in Canada that is so precious,” Mr. Dumerac said. “My feeling is we have to champion our resources.”