Some of the Victoria area's picturesque waterfront parks are being floated as possible sites for a sewage-treatment plant, nearly a decade after provincial authorities first pressed local governments to stop pumping raw waste water into the ocean.

The Capital Regional District is planning a $780-million facility that would end the daily practice of pumping roughly 130 million litres of raw effluent into the Juan de Fuca Strait. On Tuesday, the district released a map showing more than 40 parcels of land, both public and private, where it says it is "technically feasible" to build waste-water treatment plants. Last year, the Township of Esquimalt rejected plans for a similar plant on its shores, to the dismay of the district.

Potential public sites for the new facility include Victoria's Beacon Hill Park, Oak Bay's Willows Park and an area across Victoria's Inner Harbour from the legislature. Private sites haven't been identified, but the district map shows loose approximations of the locations in question.

Some of the sites are large enough to hold one plant that could serve the entire region while others could house smaller compact facilities that could be linked together, according to a district subcommittee that includes the City of Victoria, the District of Oak Bay and the District of Saanich.

The regional district hopes to select one or more of the sites early this summer after two public consultations on the last weekend of May, it said in a news release. A parallel subcommittee that includes the communities of Colwood, Langford, View Royal, Esquimalt and the Songhees First Nation has selected 20 potential sites under those communities' jurisdiction, but the list has not been made public.

If the regional district can't settle on a plan by December and approve the full project by next March, it risks losing more than $500-million in funding from the provincial and federal governments, Victoria Mayor Lisa Helps has said. The rest of the project would be funded by the region's taxpayers.

Green Party MLA Andrew Weaver, whose Oak Bay-Gordon Head riding is home to a handful of the potential sites, welcomed the district's announcement.

"It is good to see progress on developing a sewage-treatment system that meets the needs of the region, and admirable the mayors, councillors and community groups are together on a commitment for public engagement and input at all stages," Mr. Weaver said in an e-mail.

James Skwarok, a local activist more widely known as his alter ego, Mr. Floatie, said he was encouraged by the "pretty tight timelines" the regional district has imposed on the public consultation and decision-making processes.

Mr. Skwarok, who started dressing up as the 1.8-metre cartoonish piece of feces 11 years ago, said he has tried to "go with the flow and move on" from Esquimalt's rejection last year of McLoughlin Point as a site for the treatment plant.

"It was disappointing for us to have spent so much money, and so much time, to come up with a plan only to have it fail," Mr. Skwarok said.

Premier Christy Clark's government refused to force the plant on Esquimalt, as the district had requested after the rejection. That prompted Washington State Governor Jay Inslee to send her a strongly worded letter urging her to reconsider her decision, saying "It is now more than 20 years since your province agreed to implement waste-water treatment in Greater Victoria, and yet today Victoria still lacks any treatment beyond screening."

In 2006, the B.C. government mandated that the Victoria region treat its sewage. Critics of the plan have long said that science shows heavy currents work as a natural method of breaking down the sewage, but supporters point to the district's own reports that show the undiluted waste water was toxic to fish and other sea life living within 100 metres of the end of the region's two outflows.

Victoria's regional government, the Capital Regional District, has released a list of potential sites for its long-awaited wastewater treatment plant. 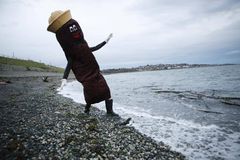