The paws of grizzlies fall in the same place over and over again, one bear walking after another with the same stride for thousands of years. That's why the tracks sink so deep into the moss. If you could compact time, you'd see an unending line of grizzlies crossing B.C.'s Great Bear Rainforest up the coast and over the mountains.

Brought here by boat, you follow the grizzly trail with a guide who's armed only with pepper spray. He assures you he's never had to use it. You step over decaying salmon the bears have caught and carried up the bank. Chums and pinks, they've come back to the rivers of their birth to spawn and die. The pathway through the trees smells like a charnel house without walls or ceiling, the stench of decay brushing your face.

For the past two days, you've caught sight of grizzlies on the other side of a wide estuary. The first one held in your binoculars munched on a salmon, then bent down to a bush and nibbled the berries. In this isolated spot deep in the trees, you feel much closer. Though you've yet to glimpse a bear, its absence is palpable. A sixth sense picks up the other side of bear watching – the bear is watching you. You touch a cedar stump clawed to shreds, run your fingers down the trunk of a rubbing tree. On its rough bark, bears have buffed their backs and shoulders, leaving strands of golden-tipped hair. It's this tint that makes a grizzly in the sun seem charged with light as if he were the first animal in creation, vibrant and dazzling in his thick new coat.

You drop down three feet from the trail to a natural balcony of vegetation that overlooks the river below. Never have you been in such a place – so absolute, so entire, so uncontainable. Isn't this what Canada's all about? Wild places too primal, too remote, too remarkably beyond philosophy for the mind to hold. Around you everything is growing. There aren't enough words for foliage, for wetness, for green. Alder branches are felted like the antlers of deer, not with velvet but with moss and lichens. Here, the ocean and the river shake hands with the sky and agree to turn the air into water, pelting down. There aren't enough words for rain.

By the end of October, the bears have grown so fat, they dig a shallow bowl for their bellies to rest in while they nap. You sit for hours, still hunting only with your eyes, in the largest temperate rain forest in the world. It stretches from the tip of Vancouver Island to the Alaska Panhandle. Your home base, the Spirit Bear Lodge, perches on edge of the Pacific in the territory of the Kitasoo/Xai'xais Nation. The lodge is named after the white bear most tourists have come to see. It's not a grizzly but a member of the black bear family. To remind humans of the ice age, the story goes, Raven made one out of every 10 black bears white. Also called kermode or ghost bear, today it's a symbol of the preciousness and vulnerability of the wilderness and those who live there.

This amazing collaboration of ocean, islands, mountains and trees could be called the Great Salmon Rainforest or the Great Whale. From the boat that takes you back to the lodge, you watch a mother humpback bang and bang her tail on the ocean's taut skin. Every fifth beat or so, her calf joins in with its smaller flukes. The mother whacks the water 50 times without a break. The noise she makes is the loudest smack on the bum of the biggest newborn baby in the world. To your ears it's just as celebratory, just as joyous. Or could she be the percussionist for a wind and brass orchestra tromboning and fluting so far underwater you can't hear? When she stops, you see the reason for her drumming: three orcas slice cleanly past the boat. The humpback is warning her nearby pod and scaring off these skillful hunters who might have targeted her calf.

At dusk, just before your boat docks, Louie, the First Nation's captain, tells a story. In the old days animals and people could talk to one other. When a bear first met a human, she taught him many things – among them, what plants and berries to eat and how to catch a salmon. Just as she was about to show him the secrets of hibernation, another human shot her. As snow begins its slow drift down the mountains, and frost kills the hardy Swiss chard in your garden, you consider the last lesson the bear meant to teach. If you had a choice, would you sleep away the longest season – the blizzards and ice storms, the cold needling your skin?

What humans gave the bear in exchange for her wisdom was death. You want to change the ending of this old story. If you find a way, the spirit bear you didn't see might come to you when you're back home. Though the bear will be in its den by now, you know the full moon in the winter sky has its rounded shoulders, and the wind, which hasn't learned how to dream away the dark and cold, will shape the ghostly, the mysterious, out of drifts of snow. 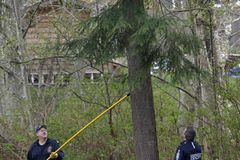 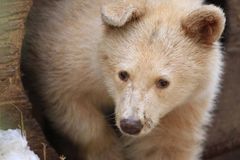 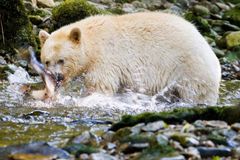