As Vancouver prepares to start taxing empty homes, West Vancouver is close to proposing the second such tax in B.C., but with a different model that local politicians say is a simpler and more effective way of targeting both local and foreign property speculators.

The B.C. government passed legislation in the summer allowing Vancouver to impose a tax on empty homes, which the city argues are taking up housing that could be rented out. The province has said it will consider similar requests from other cities.

West Vancouver Councillor Craig Cameron said the city is a week or two away from officially requesting the provincial government amend the Community Charter so that any B.C. municipality can levy a higher rate of property tax on anyone who does not claim their home is their principal residence.

RELATED: B.C. real estate reform: What you need to know

EXPLAINER: Real-estate reform: What you need to know about Ottawa's overhaul

"No municipality needs to enforce or implement it unless they want to – all we're asking the province to do is to make the legislative change to do this," he said.

Currently, municipalities in British Columbia can tax residential properties with one rate. Creating a two-tiered levy would reward people who own and live in the community, Mr. Cameron said.

"What is that rate? Who knows," he said. "We have to think about that and make it high enough to be meaningful."

West Vancouver would use any revenue gained from the proposed tax to create affordable housing, Mr. Cameron said.

Vancouver's tax, which will now be put through public consulation, would mean owners could be sent a form, along with the yearly mailed-out tax notices. Owners would need to indicate whether the house is a principal residence, an investment property that is rented out, a vacant residence that qualifies for an exemption, or a secondary residence that is used only part of the year or left vacant.

City staff will conduct audits to verify whether houses really are principal residences, based on resident complaints about vacant houses and in areas that are known to have significant percentages of vacant units.

Mr. Cameron said West Vancouver's proposal will be more streamlined and divide all homeowners – regardless of nationality or tax residency status – into those who live in the home they own and those who do not.

"While the details aren't resolved, this is the basic idea," he said. "We have no desire to implement a vacancy tax because it's highly unenforceable and we're going to end up creating a bureaucracy that will probably eat up much if not all of the revenue we get.

"And there are many ways to game the system."

While at a provincial summit of civic politicians last week, Rich Coleman, the minister responsible for housing over the past 15 years, told Mr. Cameron and his West Vancouver colleagues to submit a two-page proposal for their tax.

Vancouver Mayor Gregor Robertson first raised the idea of a tax on empty houses this past June, amid growing concern that speculators who leave properties empty were fuelling the region's rapidly increasing housing prices. Several months earlier, Vancouver released the results of a study that attempted to measure the problem, identifying more than 10,000 empty houses, mostly condos.

The B.C. government recalled the legislature for a brief summer sitting in part to amend provincial law to give Vancouver the authority to impose a vacancy tax, after Mr. Robertson issued an ultimatum warning his city would go ahead even without the province's support.

Vancouver is now seeking public consultation on its empty-home tax, which it plans to introduce next year.

When it approved Vancouver's new tax, the province said it was open to to changing the charter governing the rest of the province's cities – if any other communities asked for it.

So far, West Vancouver appears closest to submitting a formal request, which the government could not act on until the legislature sits again next year. Mayors of nearby communities such as Coquitlam, Surrey, North Vancouver and Burnaby had previously agreed West Vancouver's proposal may be one solution to vacant homes and increasing levels of foreign speculation. Richmond Mayor Malcolm Brodie said he has no plans to request such a tax in his community, which saw almost one in five homes sold to foreign buyers earlier this summer, according to provincial data.

"My problem with the vacancy tax is I believe it was hard to define and difficult to enforce," he said. "This would be the same." 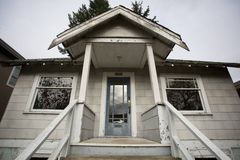