The move is the latest twist in a global investigation centred on an unusual payment of $681-million (U.S.) from accounts and companies linked to 1MDB into the private accounts of Mr. Najib, who founded and chairs 1MDB. As the investigations continue, Malaysia's government has undertaken a widespread crackdown on dissidents and dismissed critical politicians – outraging human-rights groups. The eventual conclusion of a domestic investigation by the country's Attorney-General – that the cash was a donation from Saudi Arabia's royal family, and has since mostly been returned – has not stopped other investigations by U.S. and Swiss authorities.

The Globe and Mail spoke to Dennis Ignatius, a career diplomat who was Malaysia's high commissioner to Canada between 2001 and 2008, and is now an advocate for human rights and democracy, about what the deteriorating situation means for the Southeast Asian country.

What is your assessment of the current state of Malaysian politics?

Malaysia is a nation in deep paralysis, a dysfunctional democracy, if it can still be called one. Allegations of massive corruption at the highest levels of government have caused a serious crisis of confidence in the government and in its ability to lead the country forward at a very challenging time.

The Attorney-General's decision to absolve the Prime Minister of any wrongdoing in connection with the alleged donation … has not gone down well with a populace already weary and wary of the ability of our institutions to act professionally and with due diligence. There is widespread dismay, anger and disillusionment.

Furthermore, the larger implications of the issue have also been ignored. Is it proper and in keeping with Malaysia's democratic traditions for a political party to accept such massive sums of money from a foreign donor?

In any other democracy, an elected politician facing such a barrage of allegations would have done the honourable thing and resigned to spare the country the agony and the embarrassment, but not here. Malaysia's international reputation is now in tatters. Investigations into high-level corruption are being carried out in a number of foreign jurisdictions, including France, Switzerland, Singapore and the United States. Prime Minister Najib has clearly taken us to a new low both at home and abroad.

To what extent do the corruption allegations hint at a broader malaise in the current administration and political system?

These allegations are, of course, serious and deeply troubling. They most certainly point to a deeper malaise in the administration, in the political culture – the degradation of our institutions and the corruption of our political system. I share the view of many civil society leaders in Malaysia that our democracy is now on its last legs.

Dozens have been charged with sedition for speaking out or harassed under a number of different security-related provisions. The Internet is being censored; a number of websites critical of the government have been blocked. More rules and laws are on the way. The economic consequences have also been disastrous. A small economy such as ours cannot long endure corruption on such a scale or such massive illicit capital outflows without serious consequences.

Unfortunately, we are not free to change our government through the electoral process because of well-documented gerrymandering and an Elections Commission that tends to favour the government. The ruling party (which has held power since Malaysia's independence in 1957), in fact, lost the popular vote in the last elections but still obtained a majority of seats in parliament.

Should foreign observers trust the internal judicial and investigative bodies looking into Mr. Najib? And are foreign entities likely to get help from local authorities?

If you ask most Malaysians, the answer will most likely be a resounding "no." Certainly, only the most naive or self-serving believe that a fair and independent investigation is possible or that foreign investigators will receive any substantial assistance from Malaysian authorities. They are simply going through the motions.

Many Malaysians, in fact, welcome the investigations by foreign agencies into the 1MDB scandal because they know that justice is not possible at home.

Petronas, Malaysia's state-owned oil and gas company, is set to be the largest foreign investor in British Columbia through its proposed Pacific NorthWest LNG project. What do you make of it, given the price of oil and what's happening to politics in Malaysia?

As with other oil corporations, there will be pressure to review investment strategies, hold off on new investments or delay existing ones. With regards to its planned investments in Canada, I suspect that Petronas will dig in for as long as it can. As its CEO has said, even in bad times, oil corporations need to invest with an eye on the future. However, I personally would not be surprised if a decision is taken to quietly delay the project for now, given the current market situation, as well as Petronas's financial position. 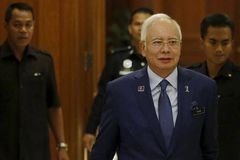