The ongoing labour dispute between B.C.'s unionized teachers and their employer, the B.C. Public School Employers' Association, has been characterized by a battle to garner favourable public opinion, with clarity often giving way to spin and carefully chosen statistics designed to sell a particular point of view.

Without a contract for more than a year, the members of the B.C. Teachers' Federation are out on strike, and progress at the bargaining table appears hard to come by. The messaging from both sides leaves students, parents, voters and other observers struggling to untangle the complex issues involved. Here, we answer some of the most vexing questions.

With reports from Andrea Woo and Mason Wright

What are the key proposals from each side?

Striking teachers and support staff stand on a picket line outside Terry Fox Secondary School in Port Coquitlam, B.C., on June 5, 2014. (Darryl Dyck for The Globe and Mail)

What are the essential numbers? Why are they so hard to make sense of?

The BCTF and the government have both sprinkled numbers throughout their arguments to back their claims on a wide range of issues – but a closer look at the figures shows they are ambiguous, and often inconsistent. For example: The government says that class size and composition – two major points of contention with the BCTF – are not as fundamental to educational outcomes as the union would argue, insisting educational outcomes have “significantly improved” since the formulae was removed from contracts in 2002.

The government bases this on increases in provincial six-year completion rates and good performance on international assessments such as the Organization for Economic Co-operation and Development’s Programme for International Student Assessment (PISA) scores. But while it’s true that the percentage of students graduating high school within six years of starting Grade 8 has increased, and B.C. students have consistently shown some of the highest Canadian results for PISA scores, those scores have slipped steadily since 2000. With scores falling everywhere in Canada except Saskatchewan and Quebec, B.C.’s students have simply declined at a slower rate than most of their peers.

PISA scores in three subjects (the OECD’s Programme for International Student Assessment, which assesses 15-year-olds from 65 countries). Scores are broken up into achievement/proficiency levels.

Other measures don’t tell much of a story, either: Both of B.C.’s Foundation Skills Assessment scores for Grade 4 and 7 students, and provincially-required examinations in high school, show marginal ups and downs over the past five years.

Meanwhile, the BCTF has cited Statistic Canada numbers in its claim that B.C. funds education at $1,000 less per student than the national average. However, the Statistics Canada table was created from two other data sets – one on operating expenditures and one on full-time equivalent enrolment – that even the national statistical agency says should not be considered directly comparable across provinces.

As well, the teachers union has taken issue with numbers from the same Statistics Canada report that said B.C.’s average remuneration per educator in public elementary and secondary schools in 2010/2011 was $80,582 – the second-highest of all Canadian provinces. That figure included wages paid to administrators such as principals and vice-principals, who make more than teachers and can skew averages, the union pointed out.

Teachers rally at a protest in March 2012 against legislation removing class size and composition from collective bargaining. The bill has since been struck down by the courts. (John Lehmann/The Globe and Mail)

How does one calculate the cost of the Supreme Court ruling that ordered class sizes back to pre-2002 levels?

It seems everyone is playing fast and loose with these numbers, the latest being the Coalition of BC Businesses, which said B.C. taxpayers would end up footing a bill of $2-billion annually if government loses its appeal of the ruling.

Another estimate of $200-million is considered low, since it can be traced back to a poorly understood 2000 estimate by the Treasury Board – so the truth must fall somewhere in between.

The court ruling itself uses an estimate that says it would cost one jurisdiction, the Surrey School District, $33-million a year to return to pre-2002 class composition and staffing levels. But extrapolating that into a province-wide number is risky because of different conditions in different school districts.

It's a question that can't be easily answered, but this article by Alexandra Posadzki attempts to find clarity. 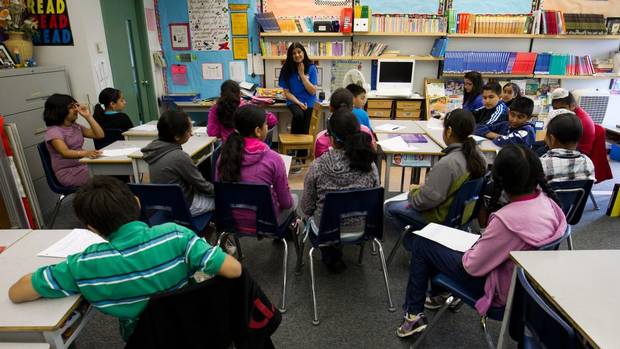 Teacher Manjeet Brar speaks to her Grade 5 students during class at Newton Elementary School in Surrey, B.C., in June 2012. (Darryl Dyck for The Globe and Mail)

How much does an average teacher really make?

In March, columnist Gary Mason pointed out that different figures were being cited for teachers' annual salaries, with each side preferring numbers that bolstered its case, rather than agreed-upon statistics.

"The government, for instance, pegs total annual compensation for teachers at nearly $89,000; a number that includes $70,624 for salary and more than $18,000 for benefits. If you have a master’s degree with 10 years’ experience, that aggregate figure is more than $100,000, according to the Ministry of Education.

"The union can produce a chart that ranks the equivalent of B.C.’s category 5 teachers among Canadian provinces and territories for 2013-14. A category 5 teacher has an undergraduate degree and at least one year of teacher training and faces a 10-step grid to reach the top level. A category 5 in Vancouver, for instance, purportedly makes $74,353, while an equal in Edmonton makes $95,354 and in Winnipeg, $84,681. That same Vancouver teacher, according to the union, will make nearly $1,000 less than a counterpart in New Brunswick and more $15,000 less than a contemporary in Toronto."

Read his column here and decide for yourself which figures are most relevant.

What else do we need to know about the current dispute?

At the root of the current labour strife are a pair of court rulings related to provisions around class size and composition that were stripped from teachers contracts a dozen years ago. In 2002, a previous Liberal government introduced legislation that took classroom makeup – the total number of students and the number of special needs kids in each class – out of the collective bargaining process. B.C. Premier Christy Clark, who was the education minister when the law was passed during an emergency session, called it a balanced, reasonable and fair piece of legislation. But the B.C. Teachers’ Federation challenged it under the Canadian Charter of Rights, arguing that they should be able to negotiate those components because they have a significant impact on teachers’ working conditions.

In April 2011, Justice Susan Griffin issued a ruling that sided with teachers and declared the law “unconstitutional and invalid.” Justice Griffin gave the government a year to address her ruling, but the government did not repeal the legislation – instead it enacted a similar law after the 12-month period expired.

The BCTF retaliated with a three-day walkout in March 2012, and returned to court in September 2013. In a second ruling issued January 27, 2014, Justice Griffin again deemed the government’s actions unconstitutional and accused the Liberals of provoking teachers into a strike during their negotiations. “The government representatives thought this would give government the opportunity to gain political support for imposing legislation on the union,” Justice Griffin wrote in her decision, imposing a $2-million fine.

The B.C. Liberals have appealed the ruling and been granted a stay that allows them to delay restoring the provisions until the appeal is heard. The government argued that retroactively restoring the language around class size and composition that it had removed from teachers’ contracts would require expensive new infrastructure, disrupt school programs and cost taxpayers $2-billion. It’s against the backdrop of this pending appeal that the current labour dispute is unfolding.

What is the history of education labour relations in the province?

1987 B.C. court grants teachers the right to bargain collectively. Initially, bargaining is conducted by a local school board and a local union. Over the following six years and three rounds of bargaining there are approximately 16 strikes and one case of legislative intervention across all of the local districts in the province.

1996 BCPSEA and BCTF ratify a Transitional Collective Agreement that rolls over the existing language of the 1993-1994 local agreements, increases compensation slightly and adds some provisions relating to standard collective agreement issues such as union membership and the grievance procedure.

September 1997 With the transitional agreement set to expire on June 30, 1998, the two sides resume negotiations.

1998 With talks stalling and the prospect of reaching an agreement unlikely, BCPSEA accepts the government’s offer to facilitate the negotiations. The government, however, opts instead to meet and negotiate privately with the BCTF. The government and the BCTF come to an agreement, but BCPSEA rejects the deal. The government ends up legislating it into effect on July 30, 1998.

2000 BCPSEA drafts a new bargaining framework to guide its objectives during negotiations with the BCTF.

2001 Negotiations begin, but the two sides are unable to reach a consensus. In mid-December the process enters the facilitation phase, with the help of veteran mediator Stephen Kelleher. The BCTF is unwilling to budge from its demands.

Jan. 27, 2002 The government passes two bills, one ending the labour dispute by establishing the terms of a collective agreement, the other removing terms defining teachers’ working conditions – such as class size and composition – from teachers’ collective agreements. A court battle ensues.

Oct. 3, 2005 After the 2004-2005 round of negotiations gets off to a rocky start and it becomes clear that reaching a collective agreement will be difficult, the province introduces Bill 12, the Teachers’ Collective Agreement Act. The bill extends the terms of the existing collective agreement to June 30, 2006.

Oct. 7, 2005 Teachers begin an illegal strike to protest having a contract imposed on them.

June 30, 2006 Both parties agree to the first ever negotiated collective agreement, spanning a five-year term that expires June 30, 2011.

March 2012 Teachers stage a three-day walkout. The government passes back-to-work legislation, imposes a cooling off period and sends the negotiations to mediation.

June 30, 2012 Teachers vote 75 per cent in favour of a tentative one-year deal, ending the dispute.