The collapse of Bixi, a Montreal company that became a dominant player in North American bike-sharing systems before careening into bankruptcy, won't end Vancouver's plans to launch a program.

Mayor Gregor Robertson and his council have gone too far down that road to backpedal now, and in other cities the programs have proved wildly popular. It seems unlikely that Vancouver's program will roll out as planned early this year, but bike-sharing is coming to the West Coast.

Before filing for bankruptcy protection last week, Bixi had been providing bikes and docking stations to some of the biggest bike-share systems in the world, including New York's.

Bixi, which is owned by Public Bike System Company (PBSC), a subsidiary of the City of Montreal, was working in partnership with Alta Bicycle Share Inc. (ABS), a Portland, Ore. company. ABS designed and delivered the systems, while Bixi provided the hardware.

ABS, the leading operator of bike-sharing systems in the U.S., was selected last year to provide Vancouver's program, which aims to put 1,500 bikes and helmet-rental boxes at 125 stations throughout the downtown core.

The bike-sharing program has long been a key goal for Mr. Robertson, who has committed Vancouver to an ambitious plan to dramatically reduce traffic by getting more people to walk, bike or take transit downtown. Under his leadership, the city has already developed an extensive network of bike paths – and the bike-share system is seen as a crowning piece in that strategy.

City officials were surprised when Bixi collapsed, but they weren't left exposed to loss because, unlike in Montreal, Vancouver did not rush into bike sharing without due caution.

Bixi launched in Montreal in 2008 and grew rapidly, going from 3,000 to 5,000 bikes. In 2011, Montreal gave Bixi $108-million in loans and loan guarantees to help the company cover a deficit and expand internationally. Montreal officials now know they went too far, too fast.

At first, things went smoothly. Bixi moved on from Montreal to Toronto, New York, Boston and a dozen other U.S. cities, where user rates outstripped all expectations.

Vancouver was lined up to be the next big customer. Then Bixi crashed.

Vancouver Councillor Heather Deal said the city hopes it can still proceed with ABS, but is waiting to see how the Portland company works through the Bixi mess first.

"Our team has continued to work with Alta," she said. "It certainly could mean [a delay in Vancouver's program]. But we're not in a hurry. We haven't been rushing this because it's complicated."

Even though council authorized $6-million last June to pay ABS to set up the bike-share system, Ms. Deal said "nothing has been signed to date" and no money has been put at risk.

Council, which pursued the project with commendable caution, stipulated that it would not pay ABS until certain contract conditions were satisfied. Because of that, the city has not been left exposed. Vancouver now has a chance to pause before deciding on its next step.

Ms. Deal said if ABS can deliver, the deal will go through. If it can't, the city will look for another company to supply the system.

Officials at ABS didn't return calls. On its website, however, the company assures the public that it is still in business.

"Our systems across the country … are up and running and ABS will ensure that they continue to operate without interruption," it states.

Let's hope so. Because bike sharing is worth pursuing. It takes cars off streets and reduces air pollution.

In Boston, the bike-share system has recorded more than one million rides since it was launched in 2011. In San Francisco, which started late last year, the first three months saw 80,000 rides. New York is getting more than 30,000 trips a day and, since the program started last May, has recorded more than four million rides. Those numbers are impressive, even if Bixi's business model isn't.

Vancouver prepares to backpedal on bike-share plan if Bixi goes under
January 23, 2014 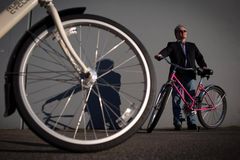 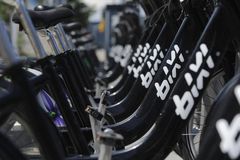 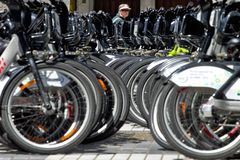 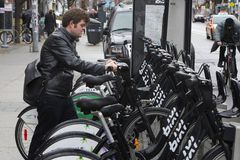 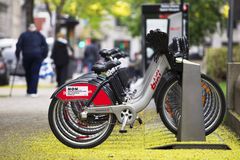