Social media played a significant role in many of the major news events in 2011. This week, The Globe's #yearinhashtags project examines the impact social media had on five of the year's biggest stories: Arab Spring, Charlie Sheen, B.C. riot, Occupy Wall Street and the "It gets better" campaign.

As the clock ticked down on the Vancouver Canucks' run to the Stanley Cup final, Dave Teixeira's focus wasn't on the barroom television broadcasting Game 7. His eyes were glued to Twitter.

The owner of communications firm Dave.ca spied some troubling tweets. More than 150,000 people had gathered downtown to watch the game on a giant outdoor television and reports of violence were pouring in with messages like, "It's getting bad downtown. Fans flipping cars, #Canucks jerseys being burned." Massive fights were also breaking out, and bottles and bricks were being hurled at overwhelmed police.

Mr. Teixeira looked up from his BlackBerry just in time to catch an urgent television report. Footage from the scene confirmed what Twitter was already telling him: For the second time in 17 years, Vancouver hockey fans were responding to their team's championship-round defeat with a riot.

Mr. Teixeira raced home, determined to use his social media skills to fulfill what he described as his civic duty. He knew many of the people at the riot were using their smartphones to tweet images. What if he created a website that pulled those images together and allowed people to identify the rioters?

The incident was trending worldwide at #canucksriot. Within two hours of the first spate of violence on June 15, canucksriot2011.com was born. Through the first day and a half, the site, buoyed by retweet after retweet, registered more than 250 million hits.

While Mr. Teixeira's website was dedicated to "naming and shaming" the rioters, others used social media to organize group clean-up sessions, or to share stories about what Vancouver was really like.

Twitter and Facebook helped Vancouverites turn the page on an ugly night. As hashtags such as #cleanupvancouver and #thisismyvancouver showed, social media provided a way for the city to heal.

Of course, social media was not viewed favourably in the immediate aftermath of the riot. Quite the opposite.

Mr. Teixeira, and others who created similar websites, were criticized for publicly identifying the rioters and were characterized as a second, online, mob.

Much scorn was also reserved for those who were on the streets during the carnage – not just the people who were fighting or eventually looting, but also those posing for photos and posting them.

In a report on the riot for the provincial government, John Furlong and Douglas Keefe described social media as one of the top frustrations they heard about from those at the scene.

"Many expressed annoyance and anger with those who used mobile devices almost as celebratory tools," the report said. "There were those who had themselves photographed looting or posing in front of burning police cars or behaving in some other reckless way."

Christopher Schneider, an assistant professor at the University of British Columbia's Okanagan campus, said many of the young people wanted to be part of history. What better way to document that history than through Twitter or Facebook?

"A lot of people who hung around the riot probably would have left if it wasn't for camera phones and social media. … People are saying, 'I am here and I need to prove this,'" he said.

Social media proponents say its role in the riot can't be classified as inherently positive or negative – there are elements of each.

When it comes to its investigation, the local police force agrees.

"It's twofold. It's benefited the investigation because we have an extraordinary amount of evidence, thanks to those in the public, those people who forwarded that information to us," said Constable Jana McGuinness of the Vancouver Police Department.

"The challenge that social media has also raised in this investigation is the overwhelming amount of evidence that's making it a lengthier investigation."

Lengthy, to some, might be an understatement. More than six months after the riot no one has been convicted of participating in it. The first batch of alleged rioters started appearing in court only last week.

But images of what transpired that night, the anarchy in the streets, remain fresh with many Vancouverites.

Harman Gill could hardly believe his eyes as he stared at the violence on television. His mother worked in the downtown core and he immediately grew concerned.

Like Mr. Teixeira, Mr. Gill runs a communications firm. Once his mother's safety was confirmed, he, too, put his skills to work.

"We wanted to do something to show that Vancouver people really care," said the owner of Gillster Media Group. "Cleaning was something that would bring everyone together, regardless of background or social circle."

Mr. Gill, along with a couple of others, used Facebook to launch "Post Riot Clean-up – Let's help Vancouver." The group almost instantly jumped to 6,000 members. Within hours, it had swelled to 20,000. More than 16,000 people remain members, and Mr. Gill has also launched the realvancouver.ca, a website dedicated to showing the world how safe and beautiful the city actually is.

Mr. Gill wasn't the only one to launch a clean-up effort – a similar operation was set up on Twitter. Thousands of people followed and still follow the @VancouverClean account. A revised Canucks logo spread across social media – the team's familiar hockey stick logo was replaced with a broom.

It's unclear, Mr. Gill admits, how many of the people who signed up to clean the city actually followed through. It's easy to click a button to show your support, harder to physically get out and do it. By the time he himself arrived downtown, there was little trash left to scoop up.

"I, like all Vancouverites, was shocked," he said. "I moved here from India and this city is something I'm proud of. I love Vancouver and something gave it a bad name. I felt a responsibility to do something. Usually, when something bad happens people are looking for leadership. People are willing to join you, you just have to motivate them in the right direction. We are just average people – the only thing we had was we know social media and we know how to bring people together."

For his efforts, Mr. Gill was one of several fans honoured by the Canucks organization. He received tickets to a game earlier this season.

This week, Vancouver police announced that they have recommended charges against 20 more suspected rioters. The force has now recommended charges against 80 people and plans to do the same with 500 to 700 people in all. One of the ways they'll be gathering information on those believed to be involved is through social media. The force plans to launch a new initiative to increase visitors to its riot investigation website.

7:57 - A vehicle that's been flipped over outside Canada Post is set ablaze.

8:00 - All Vancouver police units are told to put on their riot gear.

8:26 - Police read out the riot act. Rioters are still throwing Molotov cocktails and other projectiles at police.

9:19 - The sun sets. St. Paul's Hospital is in code orange, or mass casualty, protocols. More than 160 people will attend hospitals for riot-related injuries before the night is through.

10:00 - 11:00 - The focus shifts from fighting and vandalism to looting. The Bay and London Drugs are ransacked.

11:39 - Windows are still being broken at Sears but the riot is deflating.

Peter Chow-White, an assistant professor at Simon Fraser University's school of communication, said reaction on Twitter to the London riots in June and the Vancouver riot was much the same.

"When I started doing my analysis, just looking at which hashtags were coming out, I started to see groupings around #vancouverriots on the one hand, #londonriots on the other," he said.

#Canucksriot was the first hashtag connected to the Vancouver incident to gain steam, though others later popped up.

Mr. Chow-White said Twitter users in both B.C. and Britain adopted hashtags such as #embarrassed, along with variations of #cleanup. Brits upset by the riots and the damage they caused utilized #notmylondon, while Lower Mainland residents adopted #notmyvancouver.

Year in hashtags: Tweets from the Vancouver riot
December 20, 2011 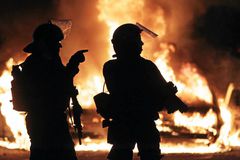 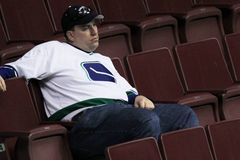 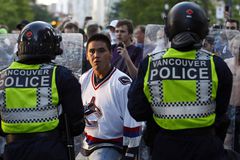 Vancouver's mayhem was more about mindlessly filling a void than passion
June 18, 2011 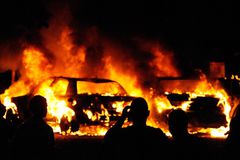 The world turns its attention to Vancouver
June 16, 2011 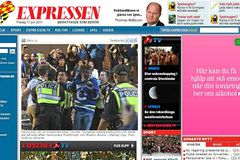 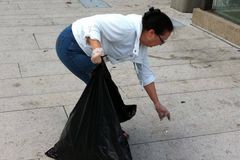 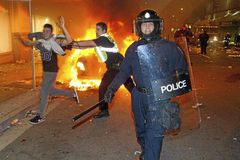 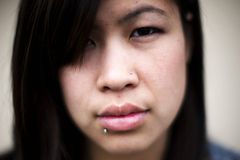