By signing off on the federal marine spill-response plan this week, Premier Christy Clark has taken another step toward approval of the Kinder Morgan pipeline expansion project. But her government still has a series of exit ramps it can take if it does not have the stomach to back the project just ahead of the provincial election in May.

Four years ago, the BC Liberal government set out five conditions that must be met before it will offer support for heavy-oil projects, including Kinder Morgan's Trans Mountain expansion. The province has given the federal government's new $1.5-billion oceans protection plan a conditional thumbs up – on the understanding that additional resources for marine spill response will be offered if Prime Minister Justin Trudeau's cabinet approves the $6.8-billion Kinder Morgan project by Dec. 19.

The federal government's marine spill-response resources were identified as the major impediment to B.C.'s support for Kinder Morgan. Even with this condition largely addressed, Environment Minister Mary Polak said Tuesday that B.C.'s approval is still far from certain. "It's fair to say not a single one of the conditions has been met yet."

The federal environmental assessment has been completed, and has recommended approval with conditions. But the courts have forced B.C. to launch its own provincial review to address First Nations consultation and accommodation. Ottawa is handling the consultation, but two members of the B.C. cabinet must reach their own conclusion on Kinder Morgan – a decision that is expected to come on the heels of the federal cabinet verdict. An added wrinkle is that the province has a legal opinion that suggests it cannot supersede Ottawa's ruling, so it is as clear as mud if B.C. can consider this condition met.

The province presented Ottawa with 11 items that it said would satisfy this demand. On Monday, the package unveiled by Mr. Trudeau in Vancouver met or exceeded most of them. (One item was an over-reaching request for funding hospital services in the north, which was ignored.) B.C. was promised only one of the three new salvage tugs it asked for, but this package only deals with current risks to the marine environment. The federal government has assured the province it will offer more protection and prevention resources if it green-lights the pipeline. This one is as good as met.

This is the province's arena and, although it has announced its own plan for terrestrial oil-spill-response capacity, the legal framework is not in place, nor are the financial assets required. These details should be finalized during the next legislative session in the spring, ahead of the B.C. election.

Condition 4: Aboriginal and treaty rights must be addressed

Kinder Morgan has a role to play in ensuring First Nations are provided with opportunities to benefit from its project, but B.C. will also take guidance from its own environmental-assessment process to determine if other remedies are required. This is a wild card, but could be completed by early in the new year.

Condition 5: B.C. receives a "fair share" of the fiscal and economic benefits from moving heavy oil to the coast

This condition got most of the attention when the five conditions were first announced, but it has quietly fallen into a negotiation with Kinder Morgan executives. Those talks were put on hold while B.C. conducts its environmental assessment, and won't resume until all the other conditions are met. The province believes a settlement is within reach, if all the other pieces fall into place.

While there are still opportunities for Ms. Clark's government to reject the project, the five conditions have always been framed as a path to "yes" on major energy-development projects.

The Clark government is positioned to go into next spring's election campaign supporting construction of this pipeline. The B.C. NDP, which executed an infamous and costly flip-flop on the project in the middle of the 2013 campaign, has finally come back to opposing it. Ms. Clark could go to voters with the pitch that she has successfully engaged with industry and the federal government for better environmental protections and a greater slice of the dividends.

She will risk no small amount of political capital to promote expanded transportation of heavy oil across B.C. and through its waterways. She has just a few months left to make that call. 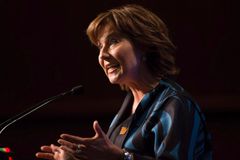