Whatever happens in the election this week, it is clear the newly elected premier, whether it is Adrian Dix or Christy Clark, will have to put the environment high on the agenda for early action.

Pipelines and liquefied natural gas development emerged as key, perhaps even defining, issues during the campaign, but there are more problems out there.

Here are 10 things the premier has to act on if he, or she, wants credibility on the green file.

No. 1: Withdraw from the Environmental Assessment Equivalency Agreement that the province signed with the federal government. There is an exit clause in the deal, which essentially gives the National Energy Board the power to do environmental assessments for B.C. By opting out, the province will have a lot more say over pipeline proposals, natural gas processing plants and off-shore oil or gas facilities. The NDP has said it will get out within 30 days. A Liberal government should do the same.

No. 2: Scrap Site C. The province shouldn't drown valuable farm land that can produce food for thousands of years to provide power to LNG plants that will be relatively short-lived.

No. 3: Bring the rapidly expanding number of independent power projects under tighter environmental scrutiny. Under the Liberals, 55 private hydro projects have been built and another 35 are proposed. But the government has done a poor job of monitoring them, allowing fish kills and other damaging impacts.

No. 4: Bring in legislation to make it illegal to cut any more giant, old-growth trees. The Ancient Forest Alliance alerted the public to plans to log the Avatar Grove, near Port Renfrew, saving it just in time. But the group is now warning the last of B.C.'s ancient trees will soon be lost unless something is done.

Vicky Husband, one of B.C.'s leading conservationists, says the group's new maps "clearly show the ecological crisis in B.C.'s forests due to a century of overcutting."

No. 5: Modernize the 150-year-old Mineral Tenure Act, which was drafted during the gold-rush and has given mining companies "free entry" for far too long. The law allows miners to stake claims virtually anywhere they want to in B.C., without consulting the government or First Nations. Should mining companies really be allowed to stake claims over places such as the Gulf Islands? They are now, under an antiquated law that should have been revised when miners stopped using mules.

No. 6: Don't allow coal mining to expand in the Elk Valley until the companies working there have demonstrated they can stop polluting streams with selenium. The water in some areas is already so toxic it can deform fish eggs and kill aquatic insects. Do we really need to see a two-headed trout before bringing this issue under control?

No. 7: Strike an all-party committee to come up with a plan to take over the duties of the federal Department of Fisheries and Oceans. DFO has been so badly managed that our salmon stocks are in peril. It's time to stop managing B.C.'s fish from Ottawa.

No. 8: Take meaningful steps to protect endangered species. B.C.'s spotted owl population has fallen from 1,000 breeding pairs to less than a dozen birds. Marbled murrelets are in decline and so are mountain caribou. Extinction should not be acceptable to any government, anywhere.

No. 9: Form an elders council to provide the government with advice on how to best manage the environment. This approach has worked for First Nations for about 10,000 years.

N0. 10: Listen to the Greens. Whether or not the party gets any seats, it has a lot of smart things to say about the environment.

Parties calculate strategy to appeal to the widest range of potential supporters
May 12, 2013 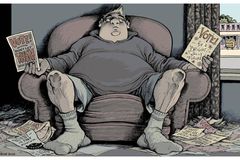 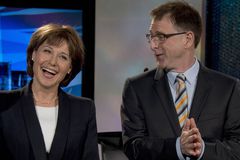 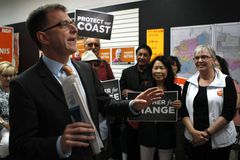 Clark focuses on NDP ridings in final campaign push
May 11, 2013 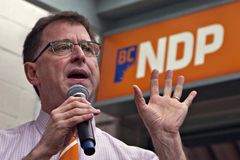 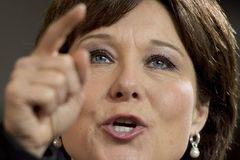