A wildfire that ripped across British Columbia's Southern Okanagan forced hundreds of people to flee and destroyed 30 homes, the most the drought-stricken province has lost since the devastating fire season of 2003.

The Rock Creek fire, which is believed to have been caused by a human and was aided by heavy winds, continued to burn out of control Sunday over more than 37 square kilometres. The blaze left charred buildings and vehicles in its wake and prompted an outpouring of community support, with B.C. Premier Christy Clark vowing her government would do everything possible to support those in need.

Kerstin Klenheimer and her husband deserted their home when the fire broke out Thursday evening. On Sunday, she stood along a highway and stared into the distance, as flames burned near her residence. She still didn't know if her house had survived.

"It was like a tornado coming – a fire tornado coming up the valley," Ms. Klenheimer said, recalling the moments before she and her husband fled. "There was no time. You just have to run."

The Rock Creek fire did much of its damage in the small unincorporated communities of Rock Creek and Westridge. More than 100 firefighters worked to contain it Sunday.

Ms. Clark, who met with residents at an evacuation centre in the nearby town of Midway, said there may be roadside video of a person tossing a cigarette that started the fire, but that has not been confirmed.

"If we can find evidence that suggests a specific individual was responsible, we are going to do everything we can and use all the tools that we have to make sure that people see some consequences for irresponsible behaviour," she said.

Kevin Skrepnek, chief fire information officer with the B.C. Wildfire Service, said the number of homes lost this season is the most since 2003, when wildfires ravaged the Kelowna area. More than 200 homes were destroyed that year due to the Okanagan Mountain fire.

The Regional District of Kootenay Boundary initially said 29 homes had been lost as a result of the Rock Creek fire, along with 11 outbuildings. However, spokesman Alan Stanley later said one of the structures believed to be an outbuilding had in fact turned out to be a home, raising the number of residences lost to 30.

"Some of these places are multigenerational, which makes it even sadder. Imagine the trauma you'd experience – you drive out of your place with nothing but the clothes you have on and then you're told there's nothing to go back to," Mr. Stanley said in an interview.

He said evacuation orders for nearly 90 homes and businesses were rescinded Sunday, though such orders remained in effect for about 240 other residences. He said campers at Kettle River Provincial Park were allowed to return to the grounds to gather their belongings, after they, too, were forced out by the fire.

Mr. Skrepnek said fire crews could get some help in the coming days, with calmer weather and less lightning forecast. The vast majority of fires have been caused by lightning, he said.

Both the Wildfire Service and Ms. Clark chided a drone operator for interfering with fire crews in the nearby town of Oliver on Sunday. The drone was flying in the firefighters' air space, forcing their aircraft to be grounded for about four hours. A similar situation occurred in West Kelowna earlier this month, when a helicopter that was providing air support to firefighters had to be grounded because there were too many drones in the area.

Despite the drone issue, Ron Hovanes, the mayor of Oliver, said the fire situation in his community was much improved Sunday from Friday night.

"This could have been a huge disaster story here, we had flames literally licking at back doors," he said in an interview.

Mr. Hovanes said all of the residents who were forced from their homes have since been allowed to return, calling the community "very lucky" while also touting the hard work by fire crews. 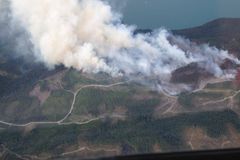 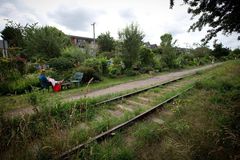 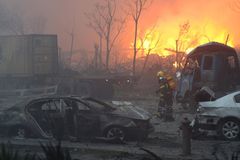